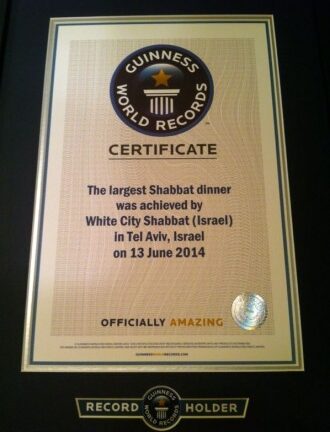 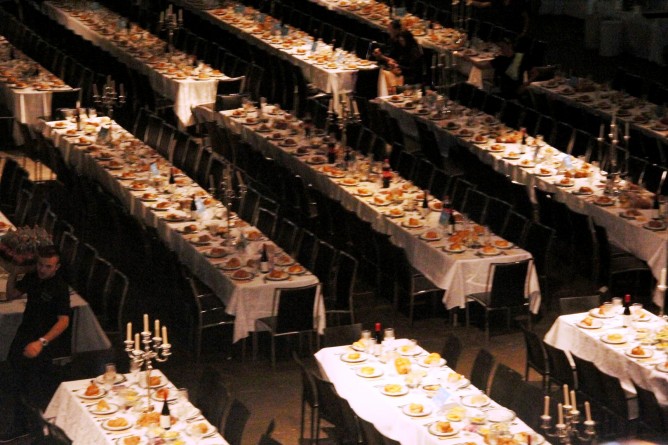 All set for a record. (Deborah Danan)
Tel Aviv hosted the largest ever Shabbat dinner when 2,226 participants gathered in a hangar at the city’s port to participate in the record-making meal. The event on June 13, 2014 was co-organized by Chabad and White City Shabbat (the Tel Aviv-based NGO that organizes events for the international community) and sponsored by the Tel Aviv Municipality, Golan Heights Winery, a crowdfunding campaign and others. 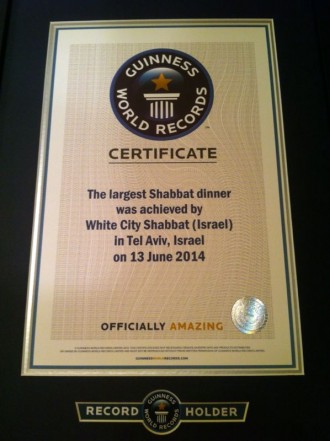 “The event was epic, and surpassed all our wildest dreams. A truly monumental moment for White City Shabbat,” Deborah Danan, Co-Director of White City Shabbat, tells ISRAEL21c. “Jews from all walks of life gathered together and the unity in the hall was tangible. When the Guinness World Records adjudicator [Pravin Patel] announced that we had more than doubled the minimum amount of attendees that Guinness demanded, the crowd was jubilant! We couldn’t hear ourselves think for all the cheering in the room.”

Organizers started campaigning for the world record three months ago and held a crowdfunding campaign to ensure it would take place. They sold out two weeks before the official event took place.

Danan says hundreds of would-be participants were left outside the hangar where the event took place and not counted in the official record numbers because they did not adhere to the required Guinness rules.

UNCOVER ISRAEL - Get the ISRAEL21c
Weekly Edition free by email
Sign Up Now!
Bring Israel's story to life.
Millions of people around the world rely on us to gain a deeper understanding of Israel. We are the trusted source for original content you won't find anywhere else.
You can make a difference. Donate today to support journalism that brings Israel’s story alive.
SUPPORT ISRAEL21c
Read more on:   News, Jay Shultz, Shabbat