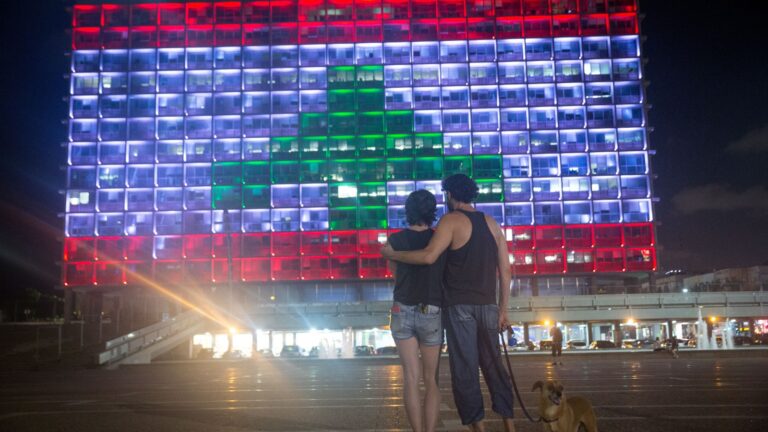 The Tel Aviv-Yafo municipality building on Rabin Square was lit up on August 5, 2020, with the Lebanese flag in solidarity with the victims of the Beirut explosion. Photo by Miriam Alster/FLASH90

The Tel Aviv-Yafo Municipality lit up the municipality building on Wednesday evening in the pattern of the Lebanese flag.

The gesture was made in solidarity with the Lebanese people following the explosion at the port of Beirut on Tuesday that has claimed more than 135 lives, injured at least 4,000 and left hundreds of thousands homeless.

Mayor Ron Huldai tweeted on Wednesday: “Tonight, we will be lighting up the Municipality with the Lebanese flag. Humanity comes before any conflict, and our hearts are with the people of Lebanon following the terrible disaster that has fallen upon them.”

Meanwhile, offers of help continue to pour in from Israeli officials, hospitals and humanitarian aid organizations.

The Israel Ministry of Foreign Affairs released the following video with Arabic and Hebrew messages from Israelis for the people of Lebanon.

Watch: Israelis share a message of support and solidarity with the people of Lebanon, following the Beirut blast. We wish those affected by the explosion a quick recovery. ????????????????