The municipality of Tel Aviv-Yafo has dozens of nicknames for itself including the Startup City, the White City, the Non-Stop City, and the Gay Capital of Israel. Now, the city by the sea is also the World’s Smartest City. 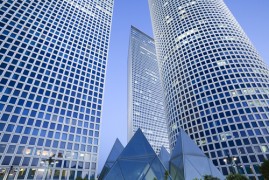 The magnitude of the high-tech activities in the city has won Tel Aviv international recognition. (Shutterstock.com)

Tel Aviv’s latest international recognition was won at the recent Smart City Expo World Congress in Barcelona when it was named first prize winner of the World Smart Cities Award.

Tel Aviv exhibited smart technologies at the expo which is considered the leading conference in the world of city innovation.

Over the last two years, the city has undergone a digital revolution, via its Digi-Tel platform: the city residents’ membership club Digi-Tel and free Wifi across the city. Tel Aviv considers itself a leading technology hub, and as such has developed advanced solutions for urban administration and civic engagement.

Tel Aviv uses the city’s high-tech ecosystem to facilitate its transformation into a smart city. Previous honors for the city include being ranked one of the most innovative cities in the world by Citibank and the Wall Street Journal.

Mayor of Tel Aviv-Yafo Ron Huldai was happy to get the latest nod for the city’s use of technology and for the creativity that exists here. Huldai said these are used to improve the services the residents receive and develop the municipal facilities to be more advanced, efficient and transparent.