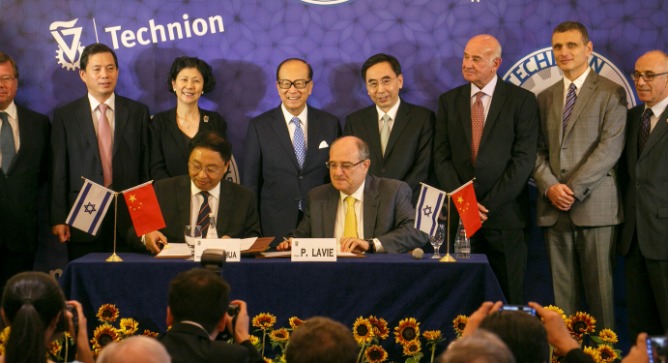 What’s China got to do with Israel’s startup success? A lot, and there’s more to come, if Asia’s wealthiest man has his way.

According to Forbes magazine, the eighth richest man in the world is Li Ka-shing of China. Li has instigated a $280 million research and academic transaction between Israel and China to benefit both countries.

The money pot –– $130 million from his own Li Ka-shing Foundation and $150 million from the governments of Guangdong Province and Shantou municipality — will give the Technion-Israel Institute of Technology a continued cutting edge by updating its infrastructure, and will help China learn Israel’s “secret sauce” to startups with a Technion-styled campus in China.

Li typically puts about one-third of his profits into socially conscious projects. After a recent billion-dollar buyout from Google, Israel’s Waze has made Horizons that much richer. Sources in Israel say that this is why Li decided to invest in Israeli higher education – specifically at the Technion, whose graduates lead many of Israel’s most successful startups.

Seeing Waze into the future

According to Danny Shapiro, director of public affairs and resource development at the Technion, there are two major developments in the pipeline. The first is $150 million toward building the Technion-Guangdong Institute of Technology at Shantou University, to open in 2014.

This campus, funded by the Guangdong Province and Shantou municipality, will draw on the Technion’s experience in science and technology. Technion faculty will help train Chinese students, who will earn degrees from the Technion in civil and environmental engineering or computer science.

“This is the first time China has invested in and completely paid for a university to open up business and start operating in China,” says Shapiro, noting that the Asian country is already host to satellite campuses of US, Canadian and European universities looking to attract Asian students.

“The Chinese and the people we are dealing with wanted the Technion to develop a world-competitive institution of education for engineering and science. They could have chosen any university in the world, and they chose Israel,” Shapiro tells ISRAEL21c.

In a separate but related development, the Li Ka-shing Foundation is donating an unprecedented $130 million to the Technion campus in Haifa to build new labs, classrooms and basic infrastructure.

If the Technion wants to “attract top people from MIT or Stanford, we need to build them half-million dollar labs. This is true for all the universities,” says Shapiro, who previously worked at Tel Aviv University in a similar capacity.

“This money is going to go to infrastructure — not just sewers and electricity, but also for those labs for the superstars we just recruited.”

Shapiro says that organizing the visit for Li and the accompanying 30-person delegation from Hong Kong “was probably one of the most fascinating and satisfying highlights of my professional life.”

The Technion also is working with Cornell University in New York to construct a campus of technology at Roosevelt Island off Manhattan. This school will grant joint Technion and Cornell degrees.

While the American science and high-tech community is already turned into the cross-pollination between Israel and its states, China is starting to wake up to the enormous potential the startup nation can offer China’s fledgling entrepreneurs.

According to Shapiro, the Chinese “have a tremendous amount of respect for our achievements. They identify with our history and especially about building ourselves and making our way in the world using technology and brainpower.”

Click here for details Increasing affinity, understanding and joy for Israel through education Click here for details
Bring Israel's story to life.
Millions of people around the world rely on us to gain a deeper understanding of Israel. We are the trusted source for original content you won't find anywhere else.
You can make a difference. Donate today to support journalism that brings Israel’s story alive.
SUPPORT ISRAEL21c
Read more on:   Israel-China, Li Ka Shing, technion, Technology, Social Action, Education, Research