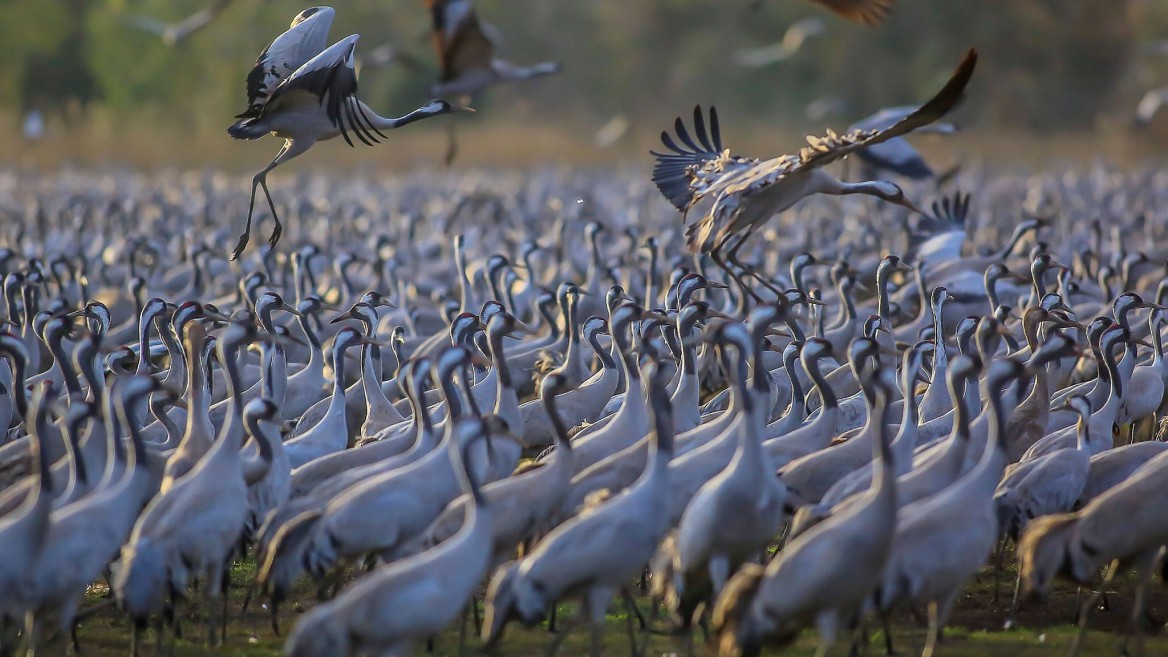 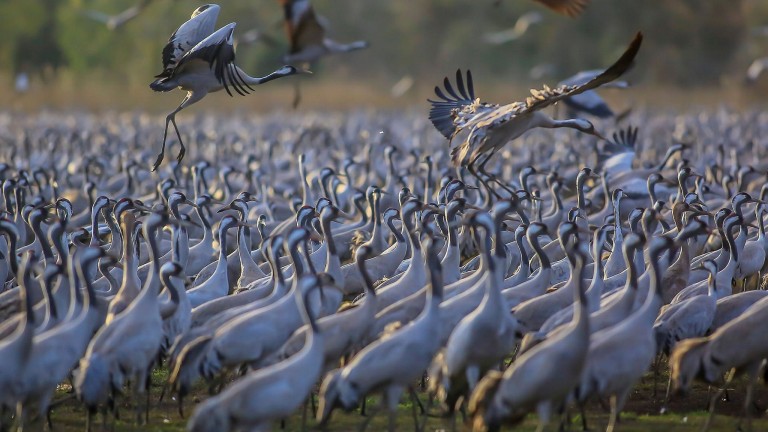 As we arrive at the Hula Valley Park and Nature Reserve, a huge flock of gray cranes lifts suddenly into the air and begins circling on the warm thermals above the park. There are hundreds and hundreds of the huge birds gliding in large, lazy circles above the lake and marshes, first white, then black, then silver.

“Ah,” says Inbar Rabin, the site’s chief guide, gazing up at the swirling columns in the air. “Isn’t that beautiful.”

Rabin has been guiding at Hula in Israel’s Upper Galilee for two and a half years but that hasn’t sapped her enthusiasm one bit. She admits that she even finds herself here on her days off, guiding friends and family.

It’s not surprising. The Hula Valley Park is unique. Located in the 7,000 km Great Rift Valley – the longest and deepest rift valley in the world – every spring and fall, half a billion birds migrate through the area, on their way to and from breeding sites in Europe, and wintering sites in Africa. Of the 500 species of birds in Israel, 390 of them have been spotted here.

It’s one of the most important flyways for migratory birds in the world. It’s also home to one of the largest concentrations of cranes. For bird lovers, it’s a paradise, but it’s also a treat for anyone who loves nature. This year, BBC Wildlife Magazine recognized the Galilee site as one of the world’s outstanding sites for nature observation.

Draining the marshes of their life

Though it’s hard to imagine as you cycle or walk the lush trek that winds through the park, the reserve is relatively new. Lake Agmon was only created in 1998 – a tiny slice of the ancient lake that once existed here – and the park opened five years later. It’s an extraordinary success story born incredibly out of a huge environmental mistake.

When Israel was created in 1948, the Hula Valley was a huge 15,000-acre lake and seasonal marshland full of mosquitoes carrying malaria and other diseases. For the newcomers, it was an obstacle, and one of the fledgling country’s first decisions was to drain the valley and create arable farmland instead. It was the stuff of legends. Songs were sung about how the heroic pioneers conquered the Hula Valley and turned it into farmland.

The damage to the environment was devastating. For the millions of birds who fly the route twice annually, it was a vital way station to stop, feed and rest on the long and exhausting journey. Though the government set aside 800 acres of the original marsh as a nature reserve in 1964 – the first in Israel – it just wasn’t enough.

Flora and fauna began to disappear, and as the years went by, organic materials from the Hula valley began to flow into the Sea of Galilee, degrading the water quality of Israel’s main natural reservoir. In addition, the region’s peat lands began to subside alarmingly.

“In terms of ecology, it was a disaster,” Omri Bonneh, director of KKL-JNF northern region, and head of tourist management at Lake Agmon admits. “It was part of a general trend worldwide to drain marshland at that time, but no-one could understand the negative impact it had on the environment,” he tells ISRAEL21c.

By the 1990s, it was clear something had to be done, and fast. Ironically it was KKL-JNF that came to the rescue. Originally in charge of draining the ancient lake and marshland, in the 1990s the non-governmental organization was handed the task of reviving them.

One thousand five hundred acres of marginal agricultural land in the midst of the ancient marsh was chosen to become an ecological nature and tourist park, and out of this a 100-acre lake was formed. Farmers gave up their land on the promise that they would share in the revenues of the new park.

The park was completed in 1998, at a cost of NIS 7.5 million, about the equivalent in those days of $25 million. By 2002, the infrastructure for eco-tourism was in place, and the site opened to tourists a year later.

The site today is free of charge to enter, and accessible only by bicycle, walking, or by electric car. There are scenic routes and bird observation points, where visitors can watch the birds and wildife through telescopes, and get information from guides. In 2008, 260,000 tourists visited the site.

For the birds, the reserve has gradually become a vital stopping point. You can see egrets, swallows, storks, eagles, pelicans, cranes, cormorants and herons in frankly inconceivable numbers. More than 200 species of waterfowl flock to the reserve. Then there are buffalo, wild cats, and beavers, swimming blithely hither and thither in the marshes. Not to mention the fish and water plants.

“It’s become a very important stop site along the rift valley,” says Bonneh. “It’s a kind of bottleneck where birds concentrate and that’s why it’s such a wonderful place to observe so many different species of birds. Any visitor to Hula Valley becomes a bird lover. You can’t visit without being deeply affected.”

It’s been such a success in fact, that out of a population of 75,000 cranes who fly back and forth through Israel between Europe and their wintering sites in Ethiopia, 25,000 now choose to spend the winter at Hula.

When this first began to happen it inevitably caused problems with the local farmers who found their field crops of chickpeas and peanuts under attack from the crane populations.

The KKL-JNF stepped in with a program, aptly named the Crane Project, designed to satisfy both the cranes and the farmers. Food is put out for the birds in specific locations near the lake, and the birds are encouraged to feed there, while being chased from neighboring crop fields.

The scheme has been a success, and now serves as a model elsewhere in Israel and in other countries that suffer similar problems with migrating cranes, including the US, which has a large crane population. Their damage to crops is a constant problem, and experts at the Hula valley collaborate on research activities with the US Forestry Service.

The US is not the only country that Hula collaborates with. Twenty-two countries share the Great Rift Valley, from Turkey in the north, to Syria, Jordan, Lebanon and finally Mozambique. The goal is to develop at least one similar nature reserve in each of these 22 countries, providing shelter, rest and food to the migrating birds.

“We want to create a network of well managed sites in every country that will maintain and encourage the whole phenomenon of bird migration,” says Bonneh. “It’s a wonderful means of collaboration between nations. Birds don’t know any borders and because of this we can connect people from different countries, even enemy countries.”

As a young site, the Hula reserve has a great deal of potential to grow and as eco-tourism becomes increasingly popular worldwide, Bonneh believes the number of international visitors will rise dramatically in the years ahead. The KKL-JNF recently applied to UNESCO to declare Lake Agmon a natural world heritage site. The application is still pending, but if granted could create an enormous stir.

“We believe the Hula valley will gradually become a more important site for international visitors. The site is still far from its potential,” says Bonneh.

Revenues from the site are split between the farmers and KKL-JNF, which uses its share to invest back into the site. There are many plans afoot to improve the reserve, including boating activities to allow visitors to observe the birds from the water. All improvements, however, must be done without affecting the environment.

Rabin continues for a moment to stare up at the birds, but finally tears her eyes away. “The Hula reserve is a beacon to the whole world,” she says simply. “It shows that if we are creative and flexible we can live together with nature and find winning solutions.”