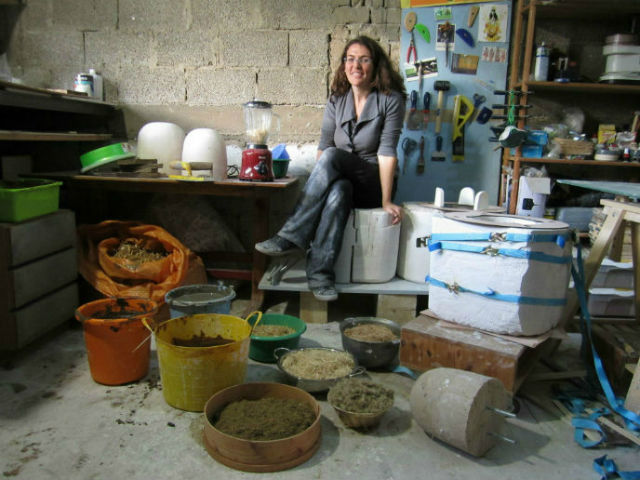 Adital Ela surrounded by natural materials in her studio.

Adital Ela surrounded by natural materials in her studio.

A lamp powered by wind, a home rainwater collector, an edible fast-food container – these are just some of the environmentally responsible products taking shape in Adital Ela’s S-Sense Design  in Tel Aviv.

The “S” in her company’s name is for “sustainability,” a word that wasn’t in the industry’s vocabulary when Ela was a student at the Holon Institute of Technology (HIT) in the late 1990s.

Even without a word to describe what she sought to create, Ela felt frustrated that industrial design was being presented in the context of consumerism. “I started to look for meaning; how I could put my creativity in a place that has purpose,” she tells ISRAEL21c.

She began learning about eco-design while interning for a semester at Yellow Circle Design Studio in Pforzheim, Germany, in 1998. During her post-graduation travels in India, she found her direction.

Ela observed Indian villagers using leaves for eating and packing, producing a variety of products from coconut shells, putting nuts on the road so cars would do the work of cracking the shells – “all kinds of strange behaviors that have the same interesting essence of using the abundance of what surrounds you,” says Ela. “This is where everything started to really make sense.” 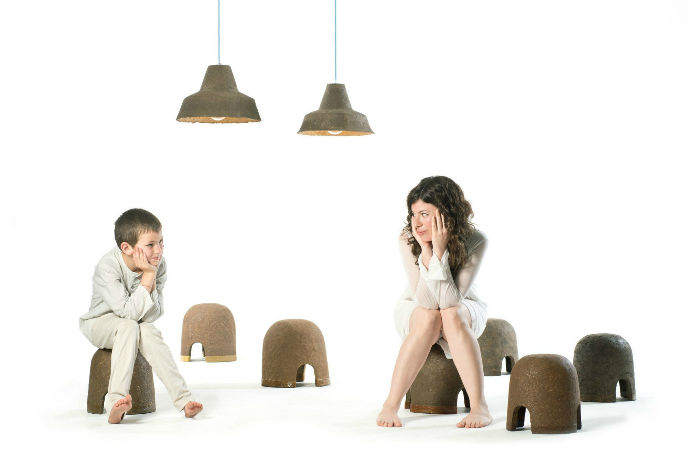 Another local custom that made a huge impression was the practice of drinking chai from unfired clay cups that then were discarded on the ground to decompose.

Ela turned this idea into Terra, a line of compressed-earth products she’s been developing for the past three years. After she started, she discovered that her grandmother had made ovens of compressed earth in Iraq.

“I’m using earth and fibers in a similar way as our ancestors did, but applying very contemporary scientific knowledge and systematic lab work to create mixtures that are much more solid and reliable,” she says. “These are products that come from dust and return to dust.”

Most raw materials used in interior design are processed by burning at high temperatures. “When you do that it’s a huge investment of energy and they will never be part of the living reality of nature again. That is why clay pots from hundreds of thousands of years ago remain, but the material is dead. My vision is to create objects that are alive and stay part of nature and the never-ending cycle of life,” says Ela.

Terra stools and lamps are traveling the world in gallery exhibitions, including the Design Museum of Holon. A wider product line is hoped to be launched commercially around the end of the year. “I would be happy to collaborate with industries wanting to adapt the technique to their own needs,” says Ela.

Among her other projects: WindyLights, a collection of outdoor LED lights powered by wind energy; WaterFull, an in-home well to collect dew and rainwater for everyday use; and pataTotal, a potato-starch-based dish for containing other foods such as French fries. These and others are in the prototype stage and Ela hopes to raise enough money and interest to further develop them.

“I am addressing design from a deep sense of participation that can become an exciting journey to a fresh, nourishing interaction between man and environment,” Ela explains in her TED Fellows talk at TEDglobal 2010.

She was named a TED Fellow around the same time she began developing her own products. Until then, she had been providing sustainable-design services to clients.

“But I felt people weren’t really ready to apply the deep sustainability I wanted to give space to,” explains Ela, who was one of two Israel TED fellows visited by Jewish Food Justice Fellows from California’s Leichtag Foundation during their recent tour of Israel. 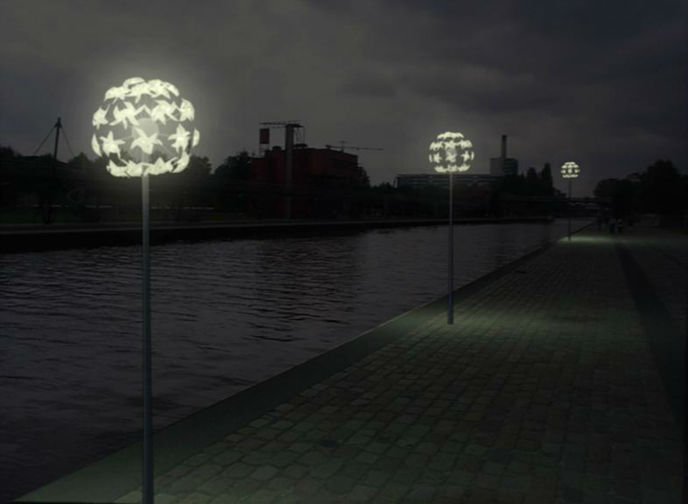 Ela, born in Jerusalem in 1974, got her master’s degree in sustainable design from Design Academy Eindhoven (Netherlands) and lectures in HIT’s social-environmental design study track, a department she helped found. She was a board member of o2 Global Network, an international organization which promotes design for sustainability.

As part of her master’s degree, Ela spent six weeks in Kenya working with artisans and helping them develop small portable objects for the tourism market. She was involved in a project in the Israeli Bedouin village of Abu-Tlul meant to ensure residents’ participation in planning their village; and Achoti (My Sister), Israel’s first fair-trade shop, where women artisans from different sectors in Israel and the West Bank sell crafts and foods.

Five design principles Ela defined while at Einhoven continue to inform her work: connecting to existing energy (such as WindyLights) so as not to burden to environment; discovering abundance even in items considered worthless; making objects become part of the living realm; including ordinary people in creating things; and using design as a mediator.