Israel has a stretch of sandy beaches extending for about 186 miles, and a sea that is virtually seaweed- and shark-free. While conditions may not be up to scratch for pro surfers, local experts say it’s a great spot for beginners and laid-back surfers.

“The water’s warm, there are no strange animals and you only have to worry about two weeks of jellyfish in July,” says Nir Almog, known to many as the father of Israeli surfing. “We’ve got soft, weak waves and you can surf absolutely anywhere. You can’t find that everywhere in the world.”

What’s more, there’s summer as well as ample winter surfing, thanks to the relatively mild Israeli weather conditions in the country’s center, which is where most of the surfing beaches are located. The waves are actually higher during the winter following heavy rainstorms, and that’s when the surfing swells show up, Almog tells ISRAEL21c.

During the summer, the water temperature in the Mediterranean can be as high as 28 to 29 degrees Celsius, while the winter waters cool down to some 14 degrees. Wave height also varies, with summer waves ranging from about one and a half, to three feet on medium surfing days, while mornings consistently offer the best swells, with waves “breaking long and perfect,” according to Almog. Fall and winter swells can reach from six to 10 feet, which is the time for the more experienced Israeli surfers to hit the waves.

Almog should know. It was his father, Shamai ‘Topsi’ Kanzapolski, a Tel Aviv lifeguard, who was recruited by Dorian ‘Doc’ Paskowitz, a California doctor who came to Israel in the 1950s, hoping to create Israeli surfing champions. Paskowitz brought six long boards made partially from balsa wood, each depicting the blue-and-white national flag.

At the time, Israeli lifeguards were catching the waves with the Hasake, a flat, wide board that had initially been used for near-shore fishing by Arab fishermen. Slowly, as the lifeguards and other locals began to use Paskowitz’s offerings, a surfing tradition was born, with Almog riding along on his father’s board.

At the time, the waves on Tel Aviv’s beaches were very high and would break right on the beach due to a lack of piers, creating a fairly dangerous setting for surfing.

Increased development along the beachfront helped to create safer conditions, and now Tel Aviv locals “can stay put on their own shores” for decent surfing, says Almog, who can be found riding the waves when he’s not in one of his two Intersurf stores. But there’s surfing to be had in all the major beach towns and cities, from Tel Aviv and Herzliya to Haifa, Netanya, Ashkelon and even in Gaza. 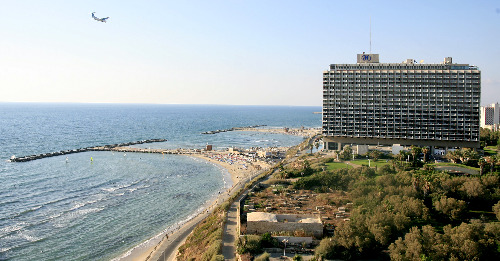 Photo by Moshe Shai/Flash90.
Hilton beach in Tel Aviv is a favorite for surfers.

In Tel Aviv, locals are fond of the two Hilton beaches, named for the hotel that towers above this particular stretch of sand. With two jetties that protect the waves from incoming currents, the beach offers one of the best reef breaks in Israel. The reef can hold swells ranging from one to seven feet and while the waves start off weak, they strengthen closer to shore. The Hilton Bet shore, also known as Topsy, is a break directly north of the Hilton that is similar in makeup to the other Hilton beach, but with a slightly different reef that tends to be less crowded. According to local surfers, the break often performs better in small to medium swell conditions. Former Israeli skateboard champion and surfer Arthur Rashkovan grew up on the Hilton Beach, in what he calls a “mini-California, surfer’s paradise.”

If you’re surfing in Tel Aviv, try the Maravi Beach, which means Western Beach and is in fact the city’s southernmost beach, situated between Tel Aviv and Jaffa. Surfers like it during the summer, when there are numerous short boarders, long boarders and body boarders, and, according to a local blog, “everybody is really mellow, no localism to worry about.” A structure fashioned of cement and stone poles that juts out of the water forms a manmade reef where waves break left and right, offering even better forms than the beach breaks of Herzliya. 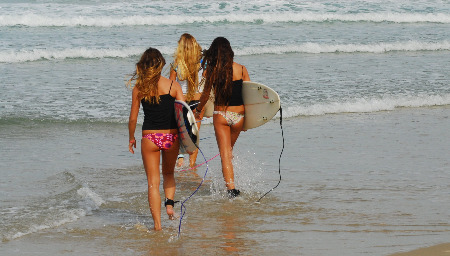 Photo by Gili Yaari/Flash 90.
Girls take to the surf.

Tel Aviv’s Dolphinarium Beach, named for an old dolphin tank that is now used as a nightclub (that was the site of a suicide bombing in 2001), offers reasonably consistent surf during the summer months, but even better conditions in the winter. Also known as the drummers’ beach for the drummers, free-style dancers and jugglers who gather there late on Friday afternoons, you can also rent surfing, windsurfing and para-surfing equipment at the water sports club located on this beach. With offshore winds from the southeast, wind swells are more typical than groundswells and there are great waves from the northwest with good surf during all stages of the tide. 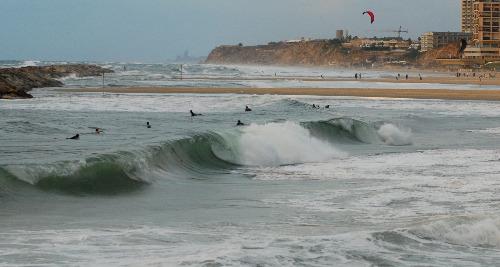 Take a ride over to Herzliya where a selection of beaches offers decent surfing in winter and summer. Almog likes Zvulun and Dabush beaches, which offer good surfing early in the morning when there’s a southern wind. Dabush is north of Herzliya’s third sea break, while Zvulun is north of Dabush. Zvulun offers slightly longer rides than Dabush with larger waves and a sandy beach. For Almog, the favorite Herzliya beach is south of the Herzliya marina, known as Marina Beach and home to the yacht crowd. As the city’s southernmost beach, it sits between the marina and the first of the three Herzliya wave breaks, and the waves that come in are perfect to ride. “It works the best when there are northern winds,” says Almog, particularly on early winter mornings, at around five a.m., when all is silent except for the sound of the waves.

Photo by Gili Yaari/Flash90.
A surfer takes a wave on a winter day on Sironit Beach in Netanya.

Just up the coast a bit are the nine miles of Netanya beaches that don’t receive the highest marks from surfer dudes, but have “okay waves for surfing,” according to Almog. Look for Kontiki and Sironit beaches which are connected to the piers, offering decent waves. However, since the “sand moves all the time,” on this open beach, it’s considered a fickle surf spot for many. At the same time, Netanya Beach is a major site for sailing, diving and snorkeling, and there’s ample opportunity to paraglide and parachute off the Netanya cliffs.

Just north of Netanya is a beautiful stretch of beaches connected to the Alexander Stream. Home to famed, giant soft-shell turtles, the banks of the stream are adjacent to the shifting sand dunes and a eucalyptus grove. The beach, where the stream meets the Mediterranean, is home to Israeli parachute surfers, where the wooden posts of what was once a pier, stand out against the waves. Local legend has it that the pier was used before the establishment of the state to land illegal immigrants arriving in defiance of British Mandatory restrictions, but Dudi Shani, director of the national park that contains the beach, says the story is untrue. There are always a few surfers in these waters, and it is the first beach in Israel designated exclusively for kite surfing. 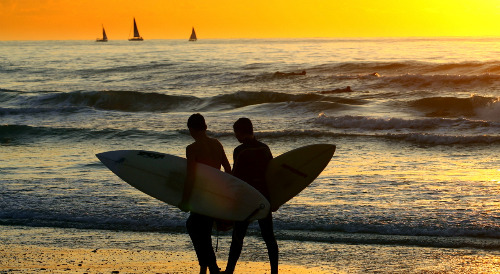 Almog doesn’t weigh in on surfing in the town of Caesarea, but surf blogger Tzachi Paz has only glowing reviews for his childhood surf spot. Growing up on the beach between Caesarea and Givat Olga, Paz divides the Caesarea strip of beachfront into three major spots. He describes the Shonit Beach as a great beach for surfers, with rocks at a depth of about 328 feet and another point that sometimes creates a deep, long wave that long boarders like to use. Sdot Yam, another well-known beach in the area has great waves during winter storms, creating walls of waves for surfers.

The best spot for surfing in Caesaria is Arubot Beach, about a quarter of a mile to the south of Shonit. Located next to major wind turbines, surfers ignore the ‘Do Not Enter’ signs and make their way down to the beach. According to Paz, there’s a myth that the waves only work during winter storms – and many surfers flock there during the winter. But it’s also great during the summer, when the waves are perfect and there are few other surfers. Paz describes these waves as the types that are “long, open, start out flat and become a step and wall as you approach the beach.” 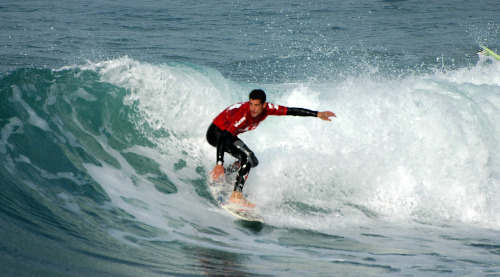 Farther north brings you to the Haifa Bay, where the Backdoor and Casino surf spots are located on the Bat Galim (Daughter of Waves) Beach on the southern tip of the bay. They’re considered to be very good beaches, particularly in the winter when the storms have strong southwest winds offshore. Protected by two jetties, Backdoor is considered Israel’s best reef break, as it is covered with moss that feels soft when it rubs against surfing bodies. With a hollow right wave, it has gained the reputation for the best tube-riding wave in the country. A little further down is Casino, an open ocean break that lacks jetties but provides a great long boarding wave. As a ‘split peak’ – which means that you can ride both lefts and rights, the wave is at least one foot bigger then Backdoor when it’s ‘firing.’

Photo by Tsafrir Abayov/Flash90.
A surfer rides waves of up to two meters high at Ashkelon.

While Ashkelon has been a surfers’ spot for some time, it’s a newer beach destination. Goote Beach is the best surf spot in this southern beach town, with jetties around the marina that make the waves smaller, and a break just south of the marina that holds great waves during winter storms. With waves higher the farther south you head in Israel, Herzliya will have knee-high waves while Ashkelon will have waist- to chest-high waves. According to Grant Shilling, writing about surfing for This Magazine, Delilah Beach in Ashkelon, named after the biblical story of Samson and Delilah, said to have taken place on this spot, is another popular surfing beach. But surfing in Ashkelon has been affected by the rockets launched from Gaza, an ironic turn of events given that surfing lingo for catching a big wave is ‘riding a bomb.’