Argan oil, the much-in-demand product of the endangered Moroccan argan tree, is now available in a hardy ‘super’ strain developed in Israel. 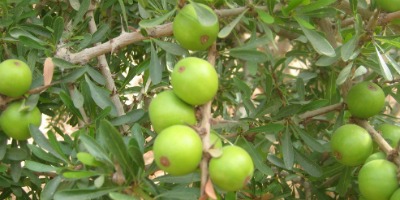 Argan 100 is a “super” strain developed to grow in Israel.

There isn’t much left for chefs to discover in this world. With cheap flights and international commerce, our global village has been combed over with a fork, quite literally. Most of the best coffees, chocolates and delicacies from every corner of the globe have been discovered and made available to shoppers.

But some of these new greats can’t keep up with demand. Take, for example, argan oil, a rare product of the Moroccan argan tree.

A relative newcomer to the kitchens of top chefs and foodies, argan oil is celebrated as the latest “super food” — chockfull of amino acids and anti-aging compounds. Rich in vitamin E, argan oil is also coveted by cosmetics companies and hair product developers for qualities that appear to surpass any other oil on the market.

“Argan oil is a new oil of the modern world,” says Chaim Oren, chief agronomist at the company Sivan SM, which is working to grow argan trees and produce argan oil in Israel.

“It is the diamond of all oil. It has a better effect on the human skin, on blood — more than any other product that exists in the world today,” he tells ISRAEL21c.

“You don’t have to wait years to see results,” he says. “Argan oil affects blood fat rapidly and can reduce cholesterol and triglycerides in only one month of treatment.”

The problem with argan oil, which according to urban legend can only be processed by the digestive tract of a goat, is that it is very limited in quantity, and its price reflects the supply and demand. The United Nations and other bodies are working in Morocco to protect argan arbors, which are disappearing due to deforestation and overgrazing. 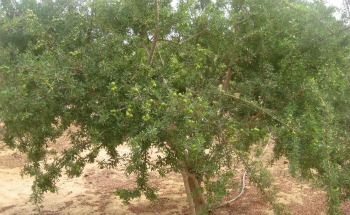 As the world’s appetite for this new oil grows, Sivan SM hopes to help meet growing demand with Argan 100, a hearty strain developed to grow in the Arava Valley, in the Negev Desert and near the city of Ashkelon – as well as in similar climates anywhere in the world.

Oren began his argan breeding program 25 years ago, and today the idea has borne fruit in the form of a high-yielding, pest-resistant and drought-tolerant tree that seems to thrive in the harsh Israeli desert. The company is cloning this mother tree and selling its cultivars. The oil is available to wholesalers and to retail customers in limited supply.

Professor Elaine Solowey from the Arava Institute for Environmental Studies has worked with argan trees since 1985, including a stint at the National School of Agriculture in Meknes, Morocco. She believes that the trees could also grow as far north as the Galilee region of Israel.

Sivan manages about 125 acres of 2,500 trees, while estimates suggest that Israel has about 20,000 argan trees in total. Each Israeli tree provides 220 pounds of fruit, which can make two liters of oil.

Sivan is keeping its operations lean and is focusing on building a sustainable business — one that grows naturally, with the trees, over time. Based in Ramat Hasharon, it employs six people, plus a staff to maintain the argan orchards and to process the oil. 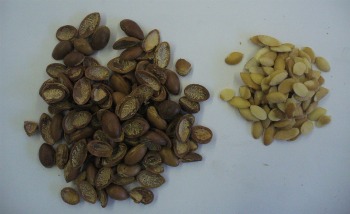 The hard shell of the argan nut doesn’t require a goat to remove it.

In business since 2007, Sivan already is having a hard time keeping argan oil on the grocery shelves. They hope that their cultivars, which require much less water to sustain, will be a hit among fruit and tree growers everywhere.

As for the goats in the urban legend, Oren doesn’t think that goats were ever “employed” to help digest the hard shell of the argan nut to extract the oil. He guesses that in the days of yore, those argan nuts snatched from the trees by hungry goats didn’t go to waste. The undigested nuts were simply added to the oil press.

“You don’t need goats to get better oil,” he asserts. “You just need something to break the shell open. It is very strong. As for most of the companies that make argan oil in Morocco, I don’t think they collect it from the goats,” he says.

Although he wasn’t completely sure.