Thousands of years ago, sailors would spread seawater in flat beds aboard ship to let the sun evaporate it to separate out the salt. The same principle is behind a modern Israeli technology that relies on sun power to distill clean water for drinking and agriculture.

“About 97 percent of the world’s water is saltwater or polluted water,” says Shimmy Zimels, CEO of Jerusalem-based SunDwater. That is why some 750 million people in 45 countries need to drill expensive wells, buy bottled water or even use contaminated water despite the huge health risks.

SunDwater’s solar-powered distiller, about to hit the market, is targeted at these populations — particularly in Africa, South America and parts of Asia. It’s a “green,” low-cost, low-maintenance system that converts dirty or salty water into potable water without any need for infrastructure or an external energy source.

The water is pumped into the unit, which is outfitted with a four-square-meter (43-square-foot) round photovoltaic dish that concentrates the sunbeams for fast evaporation. The water vapor flows into a cylinder where it gets condensed back into freshwater.

The device was invented by Zimels’ childhood friend, product developer Shimon Ben-Dor, during the Israeli drought of 2009. A pre-market operational unit, set up in a sunny industrial park not far from the Dead Sea, produces 400 liters of clean water per day — five times the rate of similar systems. Several units could be linked to create a water farm, and a much larger version also is planned. 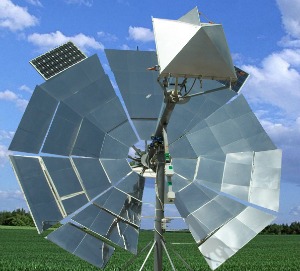 Sunlight is concentrated on the SunDwater dish so it doesn’t need a large footprint.

“This concept took several directions before Shimon decided to try getting heated water to evaporate and go back to its original molecular structure, which is what happens when it rains and the water evaporates up to the clouds,” Zimels tells ISRAEL21c. “His concept was to replicate what nature does.”

New water is constantly pumped back into the closed system as the water evaporates, Zimels adds. “There is no need for electricity. We are just using nature to improve nature itself, not creating new environmental problems.”

While in Israel the chronic shortage of freshwater has mostly been addressed with desalination plants, this expensive solution is not practical for larger countries with spread-out populations.

Accordingly, customers in India, Madagascar, Nigeria and other African countries have expressed interest in the product. SunDwater is working with WaterWays, an Israeli water consultancy for rural regions, to get the technology to areas of need in the most efficient manner.

“We believe in the long run the unit could be manufactured in the country where it will be installed, offering an added financial advantage to those countries,” says Zimels. SunDwater would provide installation and training for local operators.

“Now we need capital to start building the whole supply chain, to train the communities in need how to operate the unit and to continue the development and improvement of our solution.”