How about some astaxanthin with your tea and scones? Made from sunshine and red microalgae in Israel’s Arava Valley, the antioxidant is believed to support and protect the immune, cardiovascular and nervous system, joints and muscles.

The British investment firm Grovepoint Capital was so enthused about the Algatechnologies product, AstaPure, that it recently added it to its permanent menu.

“As a result, we now have a new partner that is running the business and that sees eye to eye with other shareholders and will aggressively expand production to address the large demand in the market.”

The company’s sales cover 30 countries, but Japan and the United States are the two main consumer bases for AstaPure softgel and hardshell capsules, topical creams, emulsions, drink mixes and suspensions.

This is a multibillion-dollar market worldwide, so it makes sense to expand the relatively small Israeli operation that has used the strong desert sun to cultivate astaxanthin at Kibbutz Ketura since 1998. 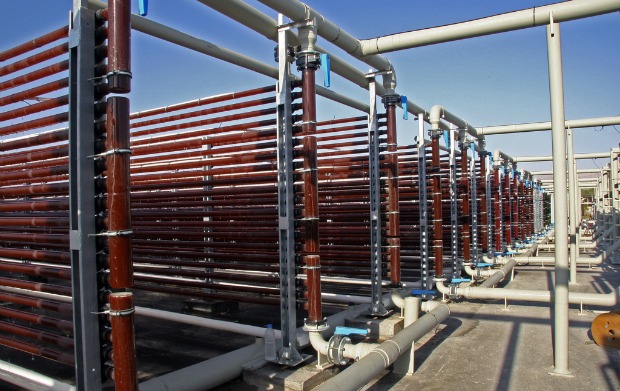 Astaxanthin, a dark red carotenoid found mainly in algae and aquatic animals such as salmon, is not synthesized in the human body but is thought to have many beneficial effects when taken as a supplement or used in cosmetics.

Building on a green tradition

More than half of Algatech’s current 27 staffers, including Hofland, live at Ketura.

This is the same forward-thinking kibbutz that hosts the Arava Institute for Environmental Studies, and the inaugural midsized solar field of Arava Power, founded in 2006 by Hofland with David Rosenblatt and Yosef Abramowitz. In August 2009, Germany’s Siemens purchased a 40 percent stake in Arava Power and is financing the construction of five of the company’s eight new solar fields.

The Grovepoint deal, in a similar fashion, will benefit the members of the kibbutz in the Arava Valley portion of the Negev Desert, just north of Israel’s southern resort city of Eilat.

“We’ll be hiring a good number of people for Algatech,” Hofland confirms, “mostly from the Arava. The kibbutz has first rights, but we will also hire from other nearby kibbutzim and from Eilat.”

Based on research by Prof. Sammy Boussiba at Ben-Gurion University of the Negev’s Landau Family Microalgal Biotechnology Laboratory, Algatechnologies uses a particular strain of algae. Hofland says this is just the tip of the iceberg.

“We know how to grow microalgae of any kind commercially, and this world is just being explored. Very few of the thousands that exist are commercially being grown,” says Hofland, “and that’s where the real future is, in my mind.”

The AstaPure production plant is, not surprisingly considering its home kibbutz, a model of clean-tech. It’s powered by solar energy and recycles the cooling water involved in the manufacturing process. The proprietary closed system consists of a modular array of tubular glass photo-bio-reactors spread over 10 acres.

Development and production will remain blue and white, says Hofland. “Astaxanthin production and distribution will expand rapidly, but at least for the near future, we’re staying in the Arava.”