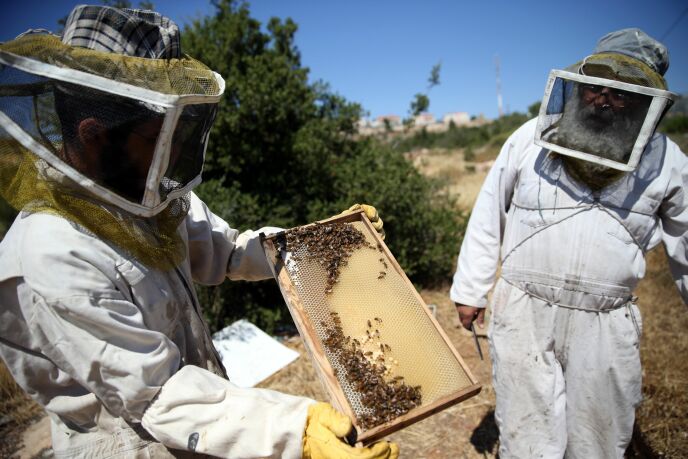 From left, beekeepers at Hebron Honey tend their honeycombs. Photo by Nati Shohat/FLASH90 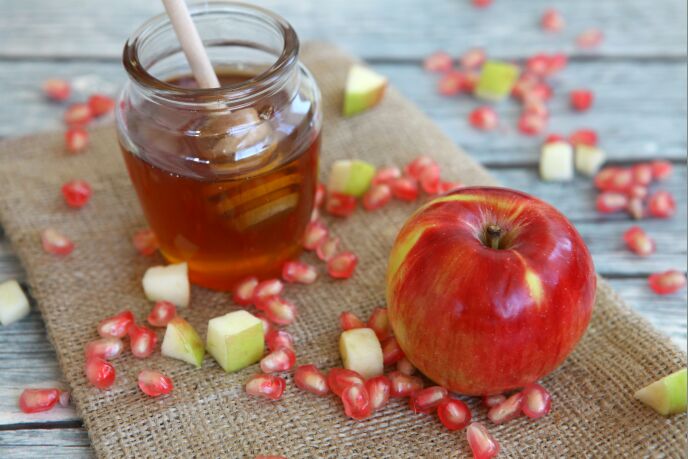 Honey, apples and pomegranate are found on most Jewish tables for Rosh Hashana. Photo by Liron Almog/FLASH90

Here’s some sweet news: The military conflict with Gaza won’t put a sting on honey availability in Israel. About 1,600 tons of honey is consumed by Israelis every Rosh Hashana to symbolize the hope of a sweet Jewish New Year ahead.

And despite the sticky situation in the south, Israel’s annual Honey Festival began as planned on August 22 and runs through September 27 at apiaries across the country. Beekeepers are offering educational and fun activities for adults and children about honey production from bee to jar, as well as tastings of the different types of honey made domestically.

From left, beekeepers at Hebron Honey tend their honeycombs. Photo by Nati Shohat/FLASH90

Israeli Honey Board CEO Hertzel Avidor tells ISRAEL21c that this year’s season ended a little earlier than usual because of the dry winter, so beekeepers were finished collecting honey before the start of Operation Protective Edge.

Unfortunately, the winter drought led to a yield of less than 3,000 tons. In a rainy year, Israel’s 100,000 commercial hives at about 450 apiaries from Beersheva to Metulla produce an average 3,500 tons of honey. To satisfy Israel’s sweet tooth for 4,000 tons per year, additional honey is imported.

Avidor says the weather has been a much larger problem than the war, honey-wise. The largest concentration of apiaries is in the north due to its more conducive climate.

Some Gaza-area apiaries, particularly Kibbutz Yad Mordechai and Kibbutz Erez, sustained damages – mainly from the heavy vehicles of the Israel Defense Forces rolling through. And because the IDF closed border areas to civilians, beekeepers weren’t able to go out and tend the hives as usual. Yad Mordechai in the south and kibbutzim Ein Harod and Dan in the north are Israel’s largest honey producers.

About 10% of the honey blend sold under the Strauss Group’s best-selling Yad Mordechai brand comes from the kibbutz of the same name. “The other 90% comes from other beekeepers all over the country,” Avidor explains.

Strauss spokeswoman Anat Confortes tells ISRAEL21c: “Tzuk Eitan [Protective Edge] has definitely made things more complicated, but there is no long-run effect for now. We are not expecting a honey shortage and the [Yad Mordechai] factory is working as usual in accordance with instructions from the Home Front Command.”

A visit to the Yad Mordechai Strauss plant the day after the ceasefire confirmed that production is buzzing along, just two kilometers from Gaza.

Plant manager Nadav Halperin explains that during the war the factory’s workday was often interrupted 20 times by incoming missiles. Three concrete bunkers set up in the facility each can hold seven or eight workers. Up to 30 people work the honey and olive-oil assembly lines at any given time, and during the conflict there were two shifts running.

“It was very, very, very hard. Sometimes we heard the boom before everybody had time to get to shelter. But I think that under these circumstances we managed very well, and now we are optimistic,” Halperin tells ISRAEL21c.

Beekeeping is an ancient art in the Middle East; archeologists from the Hebrew University of Jerusalem recently excavated an apiary dating from the 10th to early ninth centuries BCE in Israel’s Beit Shean Valley.

Most jars of honey on supermarket shelves in Israel contain a mixture of honey from different sources – not just different apiaries but also different fruits and wildflowers. 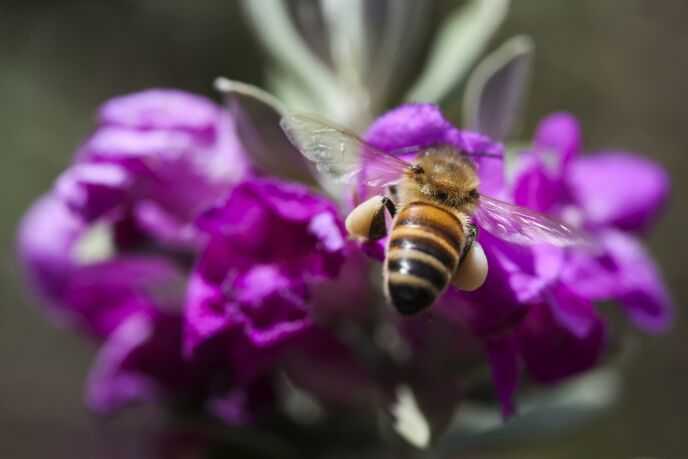 A honeybee doing its thing. Photo by Nati Shohat/FLASH90

Honeybees in Israel once collected nectar mainly from citrus and cotton, and though citrus is still the largest honey source it has dwindled by half in the past few decades, says Avidor. Cotton has declined even more.

“Eucalyptus is becoming bigger and bigger because it has a high concentration of nectar and can grow easily all over the country,” he says. “Eucalyptus trees don’t even need irrigation after the first two years.”

Honey also is produced from the oregano-like za’atar and from avocado, carob, thyme and plum blossoms. “Each tastes different and has a different color and texture,” says Avidor.

His personal favorite honey is from the eshel, or tamarisk, grown at Ein Yahav in the Arava. “You must taste it,” he urges. “But you won’t find it in supermarkets.”

Where to catch the Honey Festival

These are the apiaries participating in the festival through September 27. Links are provided to those with an English-language website. Before visiting, call ahead to ask if an English-speaking guide is available.