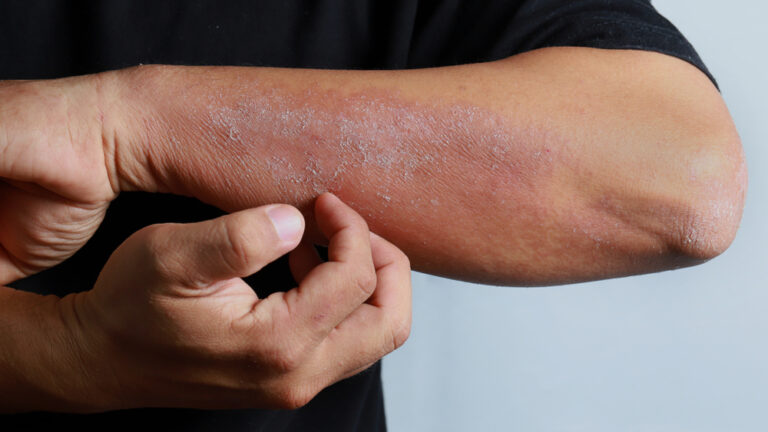 Atopic dermatitis is a chronic inflammatory disorder that currently has no cure. Photo by TY Lim/Shutterstock.com

Millions of people are affected by itchy, flaky patches of skin, courtesy of atopic dermatitis. The chronic inflammatory disorder has no cure. Patients can only rub in some ointments and keep their skin moisturized.

Following research conducted by Israeli scientists, however, more serious help might be on hand.

Scientists from Tel Aviv University recently identified the receptor chain involved in the development of atopic dermatitis. Based on this, they hope to create a therapeutic drug to treat the irritating disorder.

The clinical symptoms of atopic dermatitis are caused by two proteins associated with multiple allergic diseases: interleukin 4 (IL-4) and interleukin 13 (IL-13). The TAU researchers used mouse models to determine, for the first time, the precise contribution of IL-4 versus that of IL-13. Their findings were published in the Science Immunology journal.

“We identified that the IL-13 receptor alpha chain plays a critical role in atopic dermatitis,” explained TAU’s Prof. Itai Benhar, who led the study with Prof. Ariel Munitz. In fact, mice that lacked the IL-13 receptor did not develop the disease at all.

“Finally, we showed that a newly generated antibody was capable of reducing atopic dermatitis in mice,” he added. “To translate our findings into human atopic dermatitis, we generated a novel antibody targeting the human IL-13 receptor α 1 and demonstrated that this antibody may serve as a prototype to treat the disease as well as other allergic diseases such as asthma or eosinophilic esophagitis.”