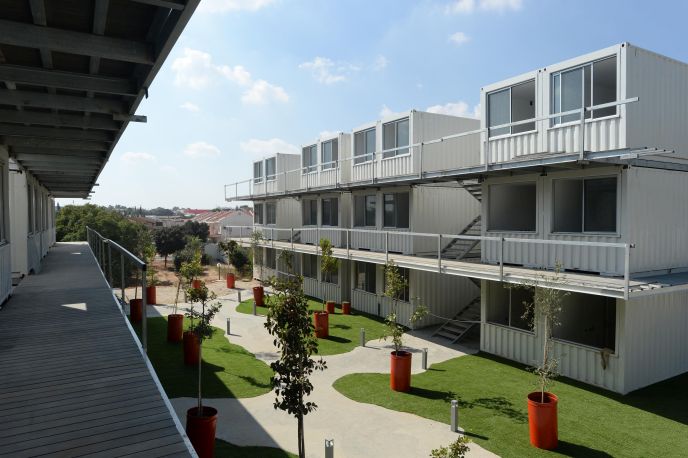 When complete, Ayalim’s Sderot village will house about 285 students.

When complete, Ayalim’s Sderot village will house about 285 students.

The beleaguered town of Sderot has long been in the headlines, usually connected to rocket attacks from Gaza. And then on a late October day, media and politicians descended on this southern municipality for a totally different kind of story: Sderot was unveiling a new, architecturally cool student complex.

The Ayalim Village is the 13th youth village built by the Ayalim Association, a grassroots movement set on rejuvenating hard-up areas of the Negev and Galilee with communities of student volunteers.

“Each village is a different story,” Effy Rubin, director of Ayalim’s Partnership Development, tells ISRAEL21c. “Our idea is to make a sustainable social change in Israel’s periphery, Negev and Galilee. If we could bring university students to the periphery, to places people don’t want to live, they can revitalize these places and show there’s a reason to stay.”

The newest student housing project is constructed of repurposed shipping containers. Earlier this year, Ayalim expanded its Lod student village with shipping containers turned into apartments. It made sense to follow this successful model of sustainable construction and urban renewal in Sderot.

Rubin notes that building with containers is much faster than traditional construction and makes it easier to get government approval. “We only starting planning this village four months ago,” says Rubin.

“These students are fulfilling [David] Ben-Gurion’s dream of populating the Negev,” Sderot Mayor Alon Davidi said at the official opening of the village. “They will become part and parcel of how this city functions.”

Sderot had a hard summer. Gaza rockets made life a living hell in the western Negev town of 22,000 during Operation Protective Edge. The town — known as the “bomb shelter capital of the world” — has actually been an ongoing target of Hamas fire from Gaza since 2001.

So, although Sderot should be the stomping grounds for students at local Sapir College, Rubin says Sapir students have looked for housing in nearby moshavim and kibbutzim. “Because of the image young people have of Sderot, young people don’t live there,” says Rubin.

“Bringing 300 students to the heart of Sderot is very, very exciting. The impact that this will have for this city, which has suffered so much, will be revolutionary,” says Rubin.

The young blood is not only about rejuvenating the hard-hit town. Ayalim activists receive university scholarships and subsidized rent in exchange for volunteer work.

While Operation Protective Edge was in full swing and most of Israel’s southern residents were running for cover from Hamas-fired rockets, Rubin says the Ayalim students in Sderot spent the summer renovating an elementary school. “The classrooms will be used for projects with youth at risk,” he says.

According to Ayalim’s website, “Each student will volunteer 10 hours per week with children, youth and seniors in Sderot, which means that eventually 3,000 hours per week will be given to the residents of Sderot. … Just imagine hundreds of enthusiastic young Israelis going through the city for 10 hours every week and ‘renovating’ whatever is needed – physically, socially and educationally.”

Moreover, the students are encouraged to become social entrepreneurs. “Talk to me in a year and I’ll tell you about all the different projects going on in Sderot,” Rubin says. 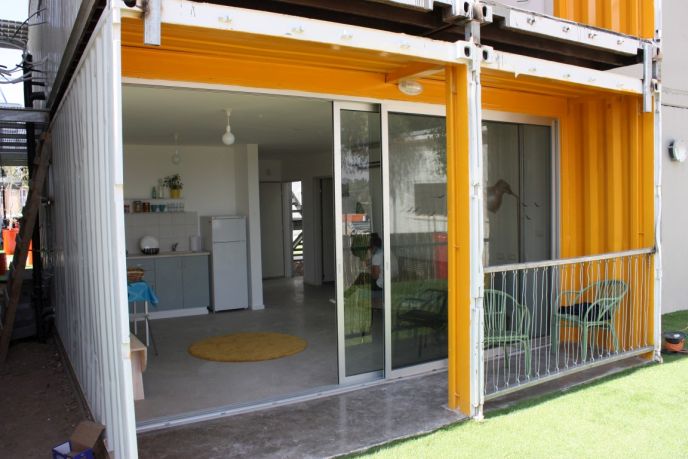 The Sderot student village was built under rocket fire, which could have totally derailed the project.

“By building a new student village in Sderot and bringing hundreds of young adults to live in Sderot, we will not only be giving an ‘energy boost’ and renewed hope to this city, we will also send an important message: We do not break, we build,” according to an Ayalim statement.

“When the rocket-alert siren was heard, we ran to the shelters and it was a bit scary for all of us, but the goal was more important than anything else. We knew this village must be built,” a volunteer named Ido told Israelife.

Politicians cited the Ayalim activists’ unwillingness to back down as a victory for Israel in the face of Hamas aggression.

“At the time of Operation Protective Edge, everyone scrambled to find the image that would capture an Israeli victory,” said Finance Minister Yair Lapid at the opening ceremony. “For me, it is you [Ayalim volunteers] who are the picture of victory. You chose to dedicate your lives to something and that’s what you’re doing here, you’re building a new world. It’s only a matter of time before Sderot becomes the best place in Israel for students.”

Said Minister of Development of the Negev and the Galilee Silvan Shalom: “Today marks a massive celebration for Sderot and the area as a whole. The new life that these students will breathe into Sderot will show those terrorists from Gaza that it’s impossible to break the spirit of the Nation of Israel.”

Now, organizers are hoping that this new paradigm of student villages and urban renewal can serve as a great example for cities throughout Israel and the world looking for disruptive ways to turn around down-and-out urban areas.

“If you give people a vision of how they can make a significant change, you’ll find they are willing to join your vision,” says Rubin.