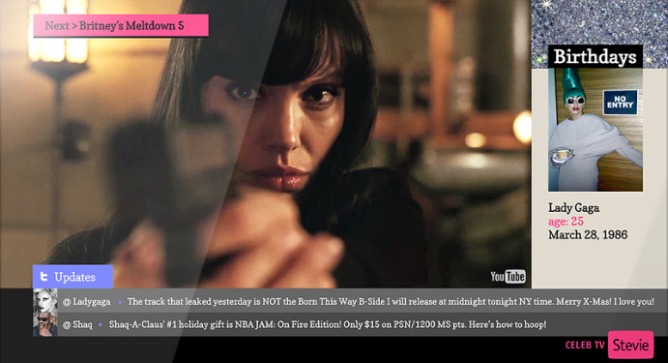 What if you could watch your favorite TV shows online while seeing clips and images of your friends, with a Facebook feed? ISRAEL21c says hello to Stevie.

Stevie TV is a startup company from Israel that mashes up online content to make a personal broadcast experience just for you.

The company of 10, based in Tel Aviv, takes feeds from Facebook and Twitter, your friends’ photos, and — let’s say — the old video of Little Richard they’re sharing, along with “Liked” articles about sea turtles, and uses a bunch of algorithms to put them all into an automatic broadcast experience.

Founded in 2011 and funded with $2.1 million, Stevie is around because interactive TV isn’t just about bigger fonts on your television. The company has developed a new way to make more sense of television in the social-networking age.

“We are also saying that the television experience is not just about watching something on a big screen,” says Stevie TV co-founder Gil Rimon.

Inspired by MTV programs of the 1980s and news networks and feeds like Bloomberg from today, Stevie offers every person his or her own TV channel “kingdom,” he tells ISRAEL21c.

Rimon notes that for the past 15 years or so, the media world has been talking about interactive TV. There is still a divide between what people access and share online on their social networks. Stevie aims to bridge that divide.

“We believe that in the future, broadcast TV is going to look a lot more like Stevie. Viewers will expect to be entertained by programming that knows who they are and recognizes their online identity, and we’d like to bring each and every one of them an awesome, personal TV experience on any platform.”

Using an easy login process that connects with Facebook and other social networks, Stevie transmits to your computer or TV a personal channel with one’s photos, videos, birthdays to note, Facebook reactions and what friends are doing, along with related content and news, to provide a laid-back TV experience.

Today’s smart TV interfaces are clumsy and not compelling for users, claims Rimon, who founded the company with his personal life partner, Yael Givon. He holds the title “chief creative technologist” while she is the CEO.

Stevie can do more than alleviate tired fingers at the keyboard as you flick through your friends’ Facebook feeds. It integrates all your favorite items, puts them into various sections and lets you experience social news and video on a traditional TV, iPad, or just about any wireless device, Rimon explains.

Rimon says that it’s hard to know what’s trending on TV if you don’t have any kind of social input into what you are watching. If a new show, live performance or classic film is not being aired through your traditional cable, then how would you ever know about it?

Stevie users can discover new content that can later be seen through the Stevie interface, or watched through on-demand services. Or they can access content that is only available live, such as sports broadcasts or music shows.

Jeff Pulver, an American tech entrepreneur and investor, was one of the first to invest in the company. “I believe they have a real chance to help transform the way we connect with and interact with media in a social context,” he tells ISRAEL21c.

The company has already put its platform under the eyes of industry tastemakers. It graduated from the first Microsoft Accelerator for Windows Azure program; and at MIPTV in Cannes — the TV and online content industry’s biggest event worldwide — Stevie won the interactive television MIPCube Lab contest.

Rimon says: “We started during the Arab Spring — the original one. We were watching the revolution unfold and realized that much of the footage is coming from YouTube and updates from Twitter, so we thought about getting rid of the middle man.

“Now with Stevie, you can see friends’ TV channels and create passive lean-back experiences, with photos, birthdays, comments, headlines about they liked and much more.”

Eventually, Stevie aims to work with set-top box manufacturers and hardware developers so that the Stevie interface will help people access their content from any and all TVs in the future.

In parallel, the company is working with content providers who own Video On Demand (VOD) libraries, to help create fan bases and make social network inroads in exposing the “long tail” of video clips that may be hidden deep in the archives.

The company also plans to work with TV operators to create a set of channels for them.

“Imagine you are watching ABC and then get zapped to your social channel,” says Rimon. “The future television is going to look a lot more like a TV-hybrid experience. There won’t be one broadcaster with many viewers. We will have something that is pre-edited, but it will be mixed in with stuff from your feed, from your preferences.”

UNCOVER ISRAEL - Get the ISRAEL21c
Weekly Edition free by email
Sign Up Now!
Bring Israel's story to life.
Millions of people around the world rely on us to gain a deeper understanding of Israel. We are the trusted source for original content you won't find anywhere else.
You can make a difference. Donate today to support journalism that brings Israel’s story alive.
SUPPORT ISRAEL21c
Read more on:   Stevie TV, interactive television, social TV, Technology, Internet, Entertainment, Culture