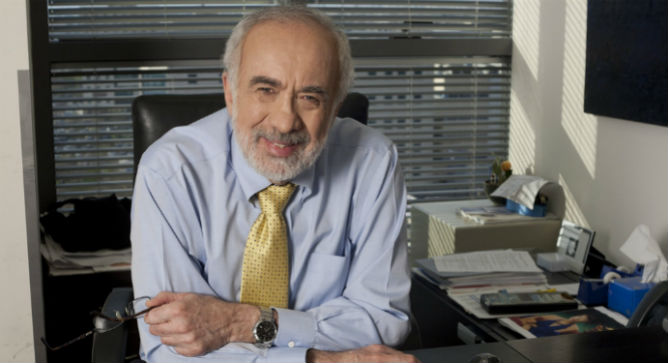 Benny Landa is revolutionizing the printing industry – for a second time.

For Benny Landa, it wasn’t enough that his Indigo digital commercial printers revolutionized the industry – making it possible to digitally print everything from photo albums to wine-bottle labels — after Indigo’s 2002 acquisition by Hewlett-Packard.

An American transplant to Israel, Landa (“the Steve Jobs of the printing world”) just unveiled his latest game-changer: a trademarked Nanographic (www.landanano.com) line of sheet-fed and web presses for commercial, packaging and publishing markets. The six printers use Israeli-developed NanoInk to print on any kind of material at high speed and low cost.

“We wanted to help the planet reduce its energy use, and we spent the past 10 years working on that,” Landa announced to Israeli reporters during a May 2 teleconference from Drupa 2012 in Germany, the largest printing equipment exhibition in the world. “On the way, we found nanotechnology. It is a true breakthrough that enables our presses to achieve amazing results.”

By offering a whole new way to apply ink, Israel is now positioned to usurp Germany as the king of the multibillion-dollar digital printing industry, he added. It was in Germany that Johannes Gutenberg invented the printing press around 1450.

Landa NanoInk is comprised of pigment particles a fraction of the size of a human hair. Powerful absorbers of light, these tiny particles deliver high-quality images that are unusually resistant to abrasion, according to Landa.

Using a water-based, energy-efficient and eco-friendly process, Nanographic machines print on any off-the-shelf material — from coated and uncoated paper to recycled cardboard; from newsprint to plastic packaging film — without pre-treatment or post-drying. They can print books, magazines, direct mail, labels, folding cartons and flexible packaging for food, pharmaceuticals, cosmetics and more.

The machines have a smaller footprint than other digital presses, and can print in up to eight colors. User-friendly touch-screens indicate how much ink is left, how much time remains to the job, and many other details at a glance. A single operator can manage up to four presses at a time.

“Nanography is a truly groundbreaking development,” Landa stated. “For the first time, commercial printers don’t have to choose between the versatility and short-run economics of digital printing and the low cost-per-page and high productivity of offset printing. Now they can have both.”

Landa left Drupa with three strategic partnerships in hand – with Tokyo-based Komori and with Germany-based Manroland Sheetfeed and Heidelberg. These are among the biggest manufacturers of printing presses in the world.

‘I couldn’t have done this anywhere else’

Landa founded Indigo in 1977 and introduced the world’s first digital color printing press 16 years later. This invention brought the 560-year-old printing industry into the computer age and is still going strong. At the Drupa press conference, Landa sounded confident that Nanography will make just as big a splash.
“Landa Nanographic printing presses are intended not to replace offset printing, but to complement it,” he explained. “For the foreseeable future, offset printing will continue to be the preferred method for producing run lengths of tens of thousands or hundreds of thousands, but the market is demanding shorter and shorter run lengths – and that’s where Nanography comes in.

He expressed great pride that it was born in Israel.

“We are a blue-and-white company,” he said of the Rehovot-based Landa Corporation, which includes Landa Digital Printing; Landa Labs for R&D Landa Ventures for investing in promising nanotechnology advances; and Landa Fund, a philanthropy dedicated to providing higher education opportunities to underprivileged Israeli youth.

“Any investor, any company can build buildings, buy equipment and put people in the buildings,” he told ISRAEL21c. “The secret to Indigo and Landa’s success is one thing absolutely unique to Israel: Israelis.”

Great inventions, he continued, need more than great scientists behind them. “Our people are fantastic professionally, but anybody in the world can find PhDs. Israelis wholly buy into what they’re doing. They are totally, absolutely committed to putting the company and the country on the map.

“Nobody does this for personal career reasons. It’s in every Israeli’s blood that life has to do not just with yourself but with Zionism and a higher purpose. When they leave the army to go into business, they bring that same indefinable fervor. It’s the magic that made Indigo successful and it’s the magic that will make us successful. I couldn’t have done this anywhere else.”

Landa employs more than 200 people directly and also uses a lot of outside contractors, he said. “Israel is a digital printing powerhouse,” said the CEO. “I feel so much pride that after 560 years, we’ll be bringing this crown from Germany to Israel in two or three years.”

UNCOVER ISRAEL - Get the ISRAEL21c
Weekly Edition free by email
Sign Up Now!
Bring Israel's story to life.
Millions of people around the world rely on us to gain a deeper understanding of Israel. We are the trusted source for original content you won't find anywhere else.
You can make a difference. Donate today to support journalism that brings Israel’s story alive.
SUPPORT ISRAEL21c
Read more on:   Technology, Hewlett-Packard, printing, Indigo, Benny Landa, Innovation, Nanotechnology