This is how his Israeli-Swedish-Polish company, Boson Energy, is poised to speed up the slow but steady transition from fossil fuels.

“Today, waste is seen as a negative value in terms of the climate and the economy. But biomass and waste streams are largely unexplored chemical carriers of hydrogen,” Grimbrandt tells ISRAEL21c.

“One ton of waste destined for landfill can instead replace five and a half barrels of crude oil. That is a real benefit you can put numbers on. It’s easy to understand.”

But not as easy to accomplish.

In a world where climate investors are keen on software, Boson’s solution is hardware that could be set up in urban areas where power is needed most. Boson calls it “IMBY” for “in my backyard” for the local setup.

The technology — developed in Israel, where Boson Energy continues to advance it — uses gasification to harvest hydrogen continuously from nonrecyclable waste and biomass. Plasma torches melt the remaining ash into a usable glass material – making the process fully circular, the CEO notes. 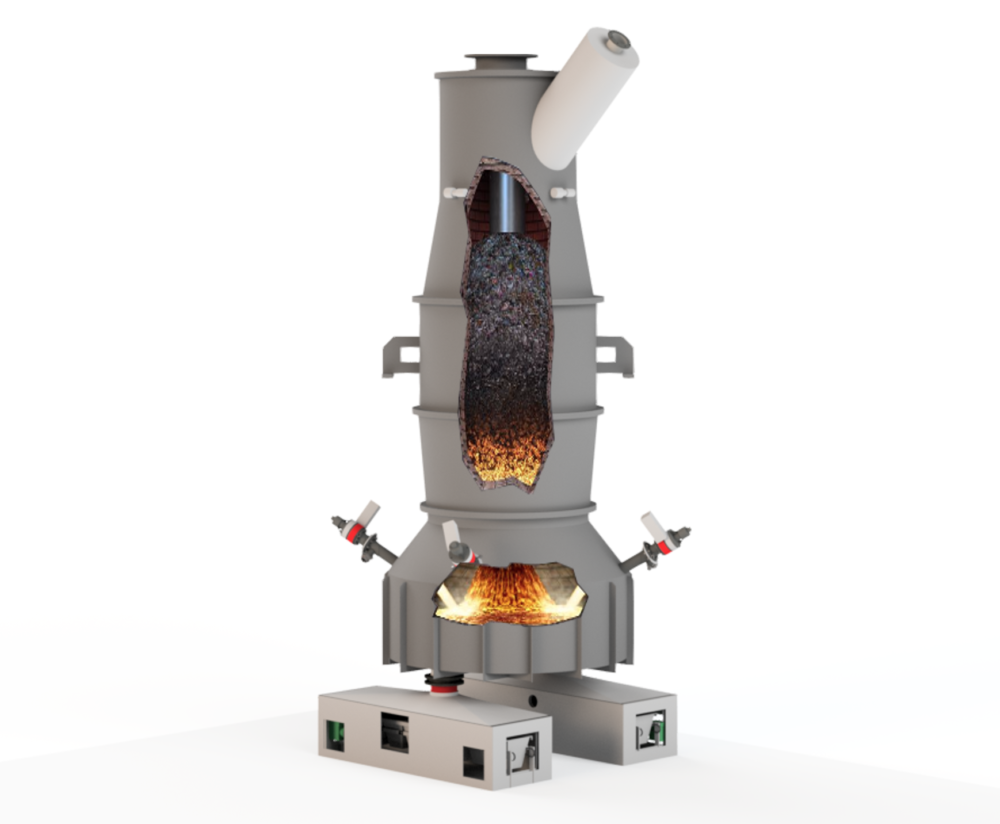 A cross-section of the Boson chamber. Photo courtesy of Boson Energy

The process also captures one ton of carbon dioxide from each ton of waste treated, allowing for a carbon-negative footprint compared to landfilling or incinerating the waste, says Grimbrandt.

Taking pressure off the energy grid

According to the US Department of Energy, hydrogen used in a fuel cell to produce electricity is an attractive energy carrier that can be produced from diverse readily available resources including renewable energy. The only emissions from a hydrogen fuel cell are water vapor and warm air.

However, hydrogen’s decarbonization potential has been stymied by a lack of production technologies and distribution infrastructure.

That’s where garbage comes in.

“In the past, and even today, waste was a persona non grata — nobody wants to know what goes on there,” says CTO Liran Dor, who helped devise the technology and works out of Boson Energy’s R&D center in Modi’in.

“When we find a way for waste to be a resource instead of a problem it changes the way you look at it.” A biomass plant in Sweden. Photo by Christoffer Pettersson

Dor points out that other methods of hydrogen production are top down and far away, such as wind or solar. A local bottom-up approach based on waste is uniquely economical and sustainable.

“Waste is something that is always generated and always has to be treated. We wanted to find a way to utilize that resource because we are living in a resource-poverty economy. People are starting to realize they can’t take it for granted anymore that the light will go on when they flip the switch,” he tells ISRAEL21c.

Boson Energy would reap profits from three directions: charging for treating the waste diverted from landfills and selling both the hydrogen and the carbon dioxide as local commodities.

The hydrogen could be used in various ways, such as fast charging of electric vehicles. The CO2 could be stored or replace fossil fuel CO2 in greenhouses and the food and beverage industry.

As more consumers buy EVs, concerns grow that the electricity grid cannot handle the increased demand. Boson aims to take the pressure off the grid. The main target customer would be municipalities around the world. In addition to the ever-present waste-management responsibility, many cities have set goals for climate footprint, CO2 emissions and fossil-free mobility.

“We have multiple potential clients,” says Dor, including industries, original equipment manufacturers and chemical companies. “So the name of the game for us is flexibility.”

Over the past two years, Calling2Scale has helped its startups hone their product and pitch and connect to funding and industry partners.

“Calling2Scale is a way to get on the radar of potential investors and customers,” says Dor.

“We are a very nerdy company and need to learn how to tell our story better and what we can do to set ourselves up for rapid growth.”

Boson Energy’s first project is expected to up and running in 2024, he adds.

The company was cofounded by Prof. Wlodzimierz Blasiak of the KTH Royal Institute of Technology in Stockholm, where he is now professor emeritus of energy and furnace engineering.

Grimbrandt comes from the tech business side, having previously been involved in two Swedish cleantech startups acquired by Siemens AG and Nalco, respectively.

Bengt Andersson, former owner of Hans Andersson Recycling in Sweden, is chairman of the board and an investor. Another investor is Per-Anders Hjort, former CEO of waste-management company Sita in Sweden and the UK.

A boson, by the way, is an energy-carrying subatomic particle.