Spring break saw groups from many US colleges exploring the startup nation’s business culture — and more than a bit of its recreational and religious sites, too.

Students from Cornell, Columbia, NYU, Dartmouth, the University of Illinois and Babson College were among those who came to Israel in March and got to meet Israeli President Shimon Peres at a reception at the Israel Museum in Jerusalem.

The delegation from the University of Illinois’s College of Business-based transnational Innovation Immersion Program (IIP) came not just to look and learn but also to meet Israeli startup clients for whom they had spent about two months doing actual business consultations.

The 35 participants chosen from an applicant field of 77 students included 28 from Illinois, five from Sweden, one from Singapore and three from Israel.

“Our trip was unique in having this consulting framework,” IIP co-student director Matt Foreman tells ISRAEL21c.

The multidisciplinary teams of undergrads and graduate students did fee-based projects in new venture technology for companies recruited by Foreman and IIP Director Rob Valli on a preliminary trip to Israel last November.

“They delivered their presentations and met with the clients in person for the first time,” says Foreman.

He isn’t permitted to name the clients, but their products include proprietary medical devices, cyber security solutions and media platforms.

“A lot of the Israeli companies are developing products for export and want to leverage the expertise of IIP students in trying to determine how best to tackle the US market. The clients have serious expectations from our organization because we take the best people, from PhDs in bioinformatics to MBA candidates to college freshman in electrical and mechanical engineering.”

The trip was organized and led by InnovatioNation Tours, a division of Keshet: The Center for Educational Tourism in Israel, one of several operators partnered with Israel & Co., a two-year-old non-profit organization in New York that brings leaders and future leaders to Israel in small delegations to get a taste of the country’s innovation, culture and fun, according to Executive Director Gil Galanos.

Galanos initiated contact with Foreman, offering to arrange for IIP students to work with Israeli companies and meet with them as part of a spring-break vacation.

“We facilitate the trips and help with content, introducing the students to companies, leaders and ambassadors, and recommending whom to work with and how long to spend in each location,” says Galanos, an Israeli native who presents to business students as a “must-see” destination.

This year alone, Israel & Co. is supporting 26 delegations, some still to arrive over the summer. Among other top-tier universities that have participated are UC-Berkeley, , Duke, and Carnegie Mellon.

Valli’s area of expertise is technology clusters, and he considers Israel’s among the world’s best.

“You have great universities that spin off fantastic human capital, along with the business infrastructure and public policy to generate funding for it,” he tells ISRAEL21c. “Israel has been a pioneer in this field, and it was the ideal place for our students and those from abroad to see how it works.”

Adds Foreman: “The idea was not only to work on a project but to be engrossed in the culture and see what it is that makes it special.”

The three participating students from the Technion-Israel Institute of Technology traveled with their student collaborators, who were exploring Israel for the first time.

Foreman notes that many of the students arrived with preconceived notions about Israel based on media portrayals. “They ended up completely shattering those notions and developing relationships that will help in their future careers, both in Israel and with other team members from abroad,” he says.

The morning they landed, the group joined Babson College peers for an outdoor team-building exercise using methods developed by the Israel Defense Forces (IDF). Among other activities, they carried stretchers on the beach and searched for three “missing persons.”

InnovatioNation’s program director, former venture capitalist Steve Gray, said that this kind of activity is essential to gain an understanding of the impact of the IDF on Israeli business culture. 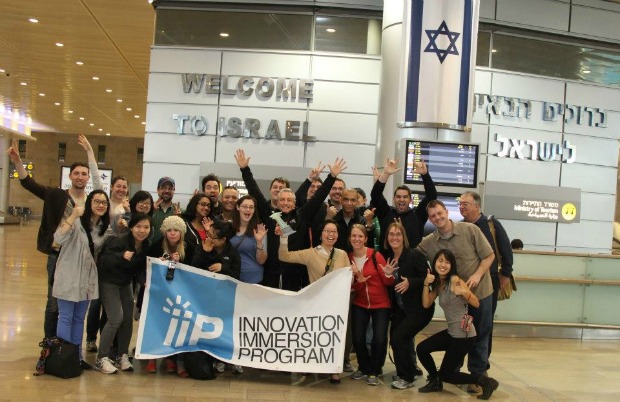 The University of Illinois group arriving in Israel.

“This got the trip off to a great start,” says Valli, who is already planning the next trip to Israel.

‘Israel knows how to host people’

The IIP group heard a talk about the business of basketball from hoops legend Tal Brody, a University of Illinois alumnus, during a personal tour of the Nokia Arena — home of the Maccabi Tel Aviv basketball club and the soon-to-be-opened Maccabi Hall of Fame.

They climbed Masada, floated in the Dead Sea, visited Jewish and Christian holy places in Jerusalem’s Old City, spent a night in a Bedouin tent, and visited the Netafim drip irrigation factory to see how Israel’s simple approach to irrigation has revolutionized agricultural technology around the world.

The itinerary included stops at Israeli businesses such as Mobileye, the AT&T Research Center, a Microsoft technology accelerator, MATAM (Israel’s first high-tech park), and Pavo microbrewery. At the Technion and the Weizmann Institute, they saw where many future business ventures get their start at the academic research level.

“Israel knows how to host people wanting to learn more about their country and technology,” says Valli. “We were embraced here.”