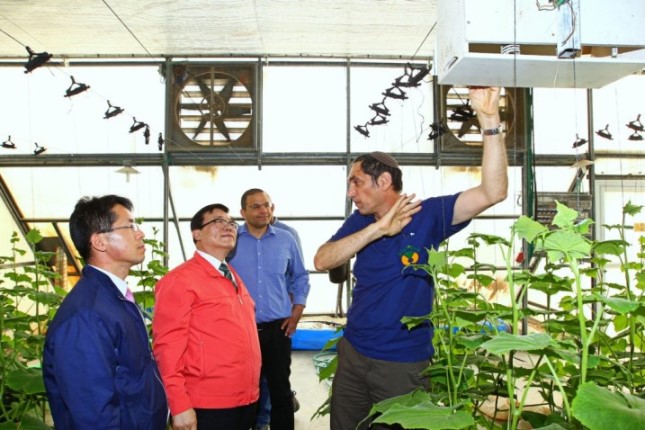 On March 9, a delegation led by South Korea’s Minister of Agriculture, Food and Rural Affairs Lee Dong-Phil toured the greenhouses and laboratories of BioBee Biological Systems at Kibbutz Sde Eliyahu.

BioBee is one of the leading international companies in the field of biological pest management, natural pollination and Medfly control.

The visit in northern Israel was arranged at the request of the minister, who wanted to learn about BioBee’s natural alternatives to chemical pesticides and solutions to the global problem of a major decrease in the wild bee population.

Dong-Phil and his staff received an overview of eight species of environmentally friendly biological control agents, plus pollinating bumblebees, which BioBee sells to farmers through subsidiaries in 50 nations.

BioFly, a division of BioBee, pioneered an all-natural approach to vanquishing Mediterranean fruit flies by unleashing sterilized male flies among crops. In 2014, BioBee sent 380 million of the engineered flies to Croatia to help fight fruit-fly infestations in orchards.

BioBee also is the world’s leading producer of Phytoseiulus persimilis, the most effective natural predator of red spider mites. This top-selling two-millimeter-long, pear-shaped creature bred in Israel is used by most of California’s strawberry farmers.