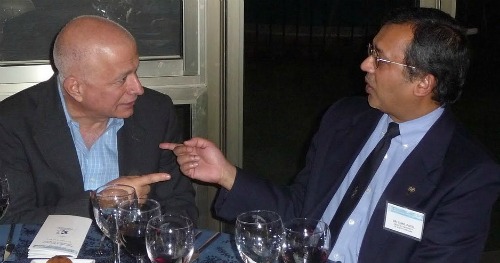 Dr. Sunil Patel, right, of the Medical University of South Carolina at dinner with Efi Cohen-Arazi, CEO of Rainbow Medical.

It wasn’t only Israeli tech savvy that 26 South Carolina business and academic leaders were eager to explore during a recent mission to Israel, but also how that know-how translates to making the world a better place.

“Where else but Israel do technology and goodwill work so closely together?” exclaims businessman Jonathan Zucker, director of the newly formed South Carolina-Israel Collaboration.

The delegates flew home to the southern state from Israel with 50 fresh business and research partnerships — including a dozen in the hot-topic area of “aging in place.”

It turns out that Israeli entrepreneurs have both low- and high-tech solutions in development for keeping seniors safe, healthy and productive in their own homes, discovered Sue Levkoff, a geriatric expert who heads the University of South Carolina’s SmartHOME project and owns the startup company Environment and Health.

Among the Israeli inventions Levkoff hopes to accelerate are a specially stable shoe that prevents falls and a system for helping the elderly take their meds at the proper times and dosages.

“We want to attract these companies to develop products in South Carolina if I could help them get grants for feasibility studies,” Levkoff says. “But for me, a wonderful outcome would be to work with these companies whether or not they have a spinoff here.”

Levkoff says she was impressed to see how Israel’s hospitals and universities work closely to fund research institutes, an area where South Carolina is trying to emulate some of its neighbor states.

“I thought we wanted to be like North Carolina, but now I feel we are trying to be like Israel,” she says. “We have a lot to learn from the Israeli sense of entrepreneurialism.”

South Carolina has one of America’s fastest-growing economies. In 2010, it brought in $4.1 billion in new capital investment.

Yet before SCIC’s trip, joint ventures between South Carolina and Israel were few. One of them is a collaboration between the Medical University of South Carolina (MUSC) and the Technion-Israel Institute of Technology.

Tom Glaser, Atlanta-based president of the American-Israel Chamber of CommerceSoutheast Region, launched the SCIC in the belief that it could stimulate many more collaborations in bio-med; sustainable agriculture, water and energy systems; aerospace and automotive transportation; security; advanced materials; and insurance/health IT.

“Of the six states in our region, South Carolina had the least going on with Israel,” Glaser tells ISRAEL21c. “We wanted to raise Israeli consciousness to the fact that South Carolina is a state that really means business and there’s a framework to make collaborations happen and get dialogues going.”

And that’s just what happened on the trip.

Straight from landing at Ben-Gurion Airport, the group met with Avi Hasson, Chief Scientist at the Ministry of Industry, Trade & Labor, to discuss forming an R&D relationship through the South Carolina Research Authority.

This cooperative initiative would focus mainly on brain research and technology, says Dr. Stephen Lanier, MUSC’s associate provost for research. “We are following up with individuals at technology transfer offices at Tel Aviv University and other universities, and with some of the incubator companies and accelerator companies where we can partner in the neuro area.” 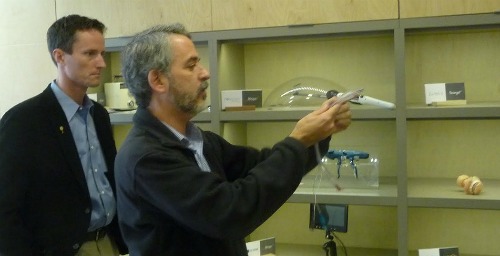 South Carolina could accelerate Israeli inventions in this field by providing access to clinical trials, a critical step in gaining approval of the US Food and Drug Administration for medical devices and drugs.

Participants dropped in to the international WATEC convention in Tel Aviv, showcasing Israel’s innovations in water, energy and environmental technology. “There was a lot of excitement about that and we will bring some specific technologies back to the South Carolina water systems,” says Glaser.

They also paid a visit to Trendlines Group, which invests in innovation-based Israeli businesses in med-tech, agri-tech and clean-tech through two Israeli government-licensed business accelerators.

“I did not have a full appreciation of the breadth of the innovation ecosystem in Israel, or the way that Israel has been able to align government, academia and private initiatives toward a common goal, synergizing each other,” says Lanier. “That was pretty impressive.”

MUSC is currently hosting clinical trials for an Israeli company’s medical device. Glaser is hopeful that the company will choose South Carolina to establish a US headquarters. “We met with the CEO and brought our economic development people to discuss incentives to get started.”

Israeli companies ActivePath, Pursway and Verint were among those Glaser introduced at the December opener of an Israel Innovation Impact series, held at UPS world headquarters in Atlanta.

Procurement teams from the Israel Ministry of Defense will soon go to South Carolina to meet defense contractors eager to sell goods and services to the Israeli military. Several projects in aviation and defense are already brewing with companies such as Israel Aerospace Industries and Elbit Systems.

In agriculture, members of the delegation from Clemson University are pursuing a collaboration with Kaiima, an Israeli next-generation seed and breeding technology company focused on sustainable development, Glaser adds.

“There is great interest in how Israelis take pure research and commercialize it through incubators and venture capital and create companies,” he says. “We can learn from the Israeli way of putting a whole system together to create robust startups.”

UNCOVER ISRAEL - Get the ISRAEL21c
Weekly Edition free by email
Sign Up Now!
Bring Israel's story to life.
Millions of people around the world rely on us to gain a deeper understanding of Israel. We are the trusted source for original content you won't find anywhere else.
You can make a difference. Donate today to support journalism that brings Israel’s story alive.
SUPPORT ISRAEL21c
Read more on:   South Carolina, Social Action, Innovation