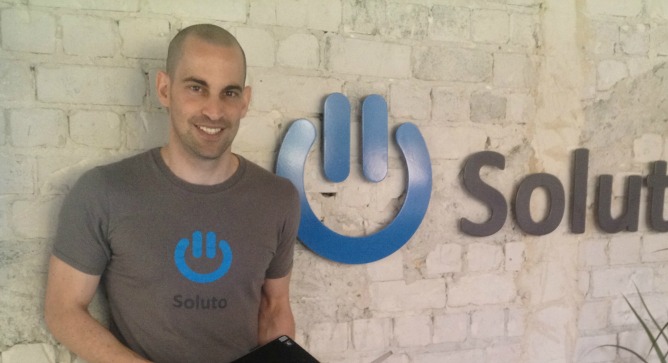 Tomer Dvir, CEO of Soluto: “The ones who make it are owners of businesses and assets; the others are employees.”

When Soluto co-founder Tomer Dvir was six, his parents bought him a pair of rabbits. Unbeknownst to the little boy, this would turn out to be a gift that kept on giving. When the volume of bunnies became too much to handle, Dvir went to the pet shop and arranged to sell the kits.

“It was my first encounter with business,” says Dvir, the 33-year-old startup whiz who began his career in computers before reaching puberty. “And with the proceeds from my bunny sales, I bought a digital wristwatch – the kind with a lot of buttons on it.”

Dvir laughs at the suggestion that the course of history might have been very different had his first furry friends been of the same gender.

From his new Tel Aviv offices on Rothschild Boulevard – into which he and his staff of 45 have just moved – Dvir discusses the journey that led to his becoming a prize-winning Israeli innovator. Soluto, founded in January 2008, makes IT software to manage personal computers, unobtrusively and remotely, from any device.

The digs are befitting of a young, hip operation: lots of open space, white-washed brick walls, and splashes of color from bright orange chairs in the communal area.

Dvir apologizes for the “mess” of renovations still underway, but stresses that the “unfinished look” is part of the concept behind his company. “We are constantly developing — not only our software, but ourselves. It is not something that is ever finished.”

The desk in his private office is utterly orderly, with all necessary information stored in the hardware of his computer. But two large whiteboards on the wall indicate that some tasks are still better done the old-fashioned way: handwritten schedules and future projections strewn with sticky notes. What is jotted on the notes, however, might as well be in an indecipherable code.

Indeed, the language of algorithms and superhighways is as foreign to most people as it is daunting. Dvir’s awareness of this fact caused him to recognize a market opportunity when he saw one. Soluto enables users to “manage their devices better or help others do so,” says Dvir, without having to summon a “geek.” It monitors the workings of one’s computer, notifying the user and fixing hitches when they arise.

The idea for Soluto and its implementation are the culmination of the years Dvir spent solving, for himself and others, the frustrating problems that all computer users are frequently forced to confront – including poor speed and crashes.

Soon after the bunny episode, one of his family’s neighbors in Netanya bought a computer. The year was 1987, and home computers were rather primitive and relatively rare in Israel. Enthralled and intrigued by the machinery, Dvir began to pay the neighbor regular visits. Before long, he had mastered it better than she.

“I then started pestering my parents from morning till night to get me a computer,” Dvir recounts, smiling at the memory. “And my mother and father, though both employed, had little money to spare.”

Nevertheless, they eventually conceded to their son’s incessant harping. This was the moment at which Dvir’s passion intersected with his profession. By the age of eight, he was spending his school vacations at the company from which his parents had purchased his computer. There he not only learned the ins and outs of hardware, but began to coach customers.

His preoccupation with computers – at age nine, he began programming software — was a source of pride for his father, who not only drove him literally, to the factory, but figuratively, by encouraging his path. By the time Dvir was in junior high school, he was earning a very good keep by solving people’s computer problems.

“At 13, I was independent,” he says. “I had business cards and charged high fees for my services.”

But this took its toll on his schoolwork. To this day, claims Dvir, “I don’t even know whether I matriculated from high school; I never went back there to find out or get my diploma.”

Dvir never felt he really fitted in at the school he attended – Handasaim high school, affiliated with Tel Aviv University. “The place was filled with braniacs and wealthy kids, and I didn’t feel like I belonged in either category,” he says.

An unfolding story of success

His lack of a sense of belonging led him to contemplate why some people are extremely successful financially while others, even industrious ones like his parents, are not. Robert Kiyosaki’s bestselling book, Rich Dad Poor Dad, provided his answer: “The ones who make it are owners of businesses and assets; the others are employees.”

Dvir’s purposefulness also came to light during his military service. Inducted into the Air Force to perform a duty he disliked, he devoted months to persuading his superiors that he would be better utilized in a different capacity. His persistence paid off.

After their discharge, he and a friend created a company that failed after two years of hard work. Rather than let this discourage him, however, he sat down to consider his next step.

This would take the form of working for MDG Medical, a US-based company that works to prevent rampant errors in medication distribution in healthcare facilities. Dvir’s computer-programming expertise was a perfect match for development of MDG technology.

As rewarding as this job was for him, however, Dvir still considered it “employment rather than ownership.” When he hit the five-year mark, he decided it was time to move on.

What ensued was his collaboration with Ishay Green (co-founder of software security startup Onigma, acquired in 2006 by McAfee) to create Soluto.

That Soluto won the 2010 TechCrunch Disrupt Award was affirmation to his backers that Soluto was on the right track. Today, while the program is free for individual users, companies can now purchase it for their networks.

Dvir’s story of success continues to unfold along with the décor of his office. What can the many startup wannabes out there learn from his experience?

“It’s a long list,” Dvir says, shrugging helplessly at the prospect of having to sum it up succinctly. “But my advice is: Be persistent – a bulldozer; learn to listen to others, but don’t get discouraged by the false assumption that they always know better than you; surround yourself with fun people with whom you enjoy collaborating; and always remember that this is a rollercoaster – you can be alternately depressed and elated several times in a single day.”

Like Dvir’s first pets, such is the nature of the beast.

UNCOVER ISRAEL - Get the ISRAEL21c
Weekly Edition free by email
Sign Up Now!
Bring Israel's story to life.
Millions of people around the world rely on us to gain a deeper understanding of Israel. We are the trusted source for original content you won't find anywhere else.
You can make a difference. Donate today to support journalism that brings Israel’s story alive.
SUPPORT ISRAEL21c
Read more on:   Soluto, Technology, People, Internet