Did you know that buildings grab 40 percent of all generated electricity? Israeli electro-optical engineer Oren Aharon was surprised to discover this statistic, and set out to do something about it as Israel moves toward implementing “green” goals over the next few years.

His solution born of three years of R&D is  SolarOr, innovative solar panels integrated into a “curtain wall” system enveloping a building.

“I saw that many buildings, especially in Tel Aviv, have huge façades of glass, and it seemed ideal to use that façade in order to generate energy,” Aharon tells ISRAEL21c.

A curtain wall is a non-structural cover “sandwich” of glass-air-glass, meant to protect the building from the ravages of the sun, rain and wind, while allowing in natural light. Aharon thought it made sense to devise a curtain wall that would make use of the sunlight to generate electricity for the building.

“We invented something we call BIPV — building-integrated photovoltaic — which we insert into the air layer between the glass layers in such a way that it produces a lot of energy on one hand, and on the other hand still permits about 30% of visible light to penetrate into the building,” says Aharon.

“On each floor, a converter will convert the output of DC energy into AC energy,” explains Aharon. “At this point, you can use it in the building or sell it back to the electric company.”

The architect would have the freedom to decide how much of the curtain wall surrounding the building would integrate the SolarOr technology, as energy-harvesting panels would not necessarily be needed throughout the entire façade. 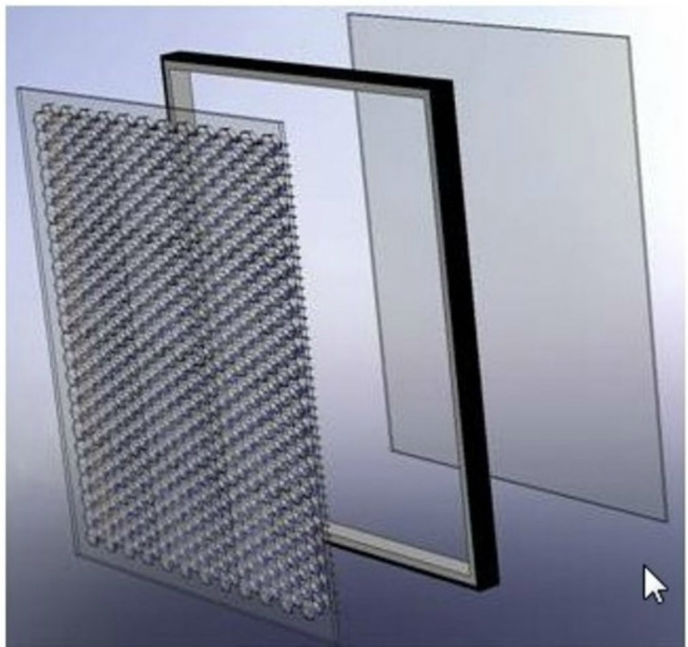 Aharon knew that no matter how ingenious his invention was, architects wouldn’t use it unless he made it aesthetically pleasing. That turned out to be easier said than done. “Eventually we found [a plastic material] that looks like a beehive, with nice colors due to the solar cells that are built into it,” he says.

SolarOr, based in Nesher near the Technion-Israel Institute of Technology, is seeking sufficient funding to begin producing the panels at Kibbutz Magen in southern Israel.

” The target price will be $300 per square meter, and each panel will measure about two by three meters. “This is a mass production type of thing, so we need substantial capital and we’re working on that for the past year,” says Aharon, who previously worked for Rafael Advanced Defense Systems, the largest employer in northern Israel.

“For me, to some extent, starting SolarOr was coming back to the source, because when I was a student in early 1980s, I was assistant to the minister of energy,” he relates.

Last year, at a major alternative energy expo in the United States, SolarOr was chosen as an especially promising technology by reporters from several publications.

Michal Bitterman, chairwoman and founding member of the Israel Green Building Council, tells ISRAEL21c that SolarOr’s concept dovetails with the council’s emphasis on promoting an integrated design approach that optimizes passive design and technology for energy conservation, efficiency and production.

“Solar technology is crucial to green building in Israel and in general to energy generation. However, many of these technologies are yet in their development phase and have not reached optimum utilization and performance. It is absurd the low extent to which these technologies are being used in a country such as ours, which is blessed by the most natural resource ever — the sun.”

She calls SolarOr “an excellent idea best implemented in high-rise buildings with a small roof area which have screen walls that could act as electricity producers. … More R&D would help it to attain the next step of being a more effective larger-scale technology.”

Bitterman says it’s essential to advocate for the advancement of SolarOr and other solar-energy technologies to advance their integration in practice. “That way they could be tested and judged in real life experience,” she concludes.