The startup nation is not exclusively a phenomenon of youth culture.

Consider the 79-year-old farmer Moshe Tzori, founder of CommonSensor, a watering sensor company based in Lachish.

Born in 1935, Tzori studied farming like the pioneer Zionists before him. His alma mater, the Kaduri School in the Lower Galilee, is the same field school that educated Israel’s late Prime Minister Yitzhak Rabin.

“My age can give hope to people who want to start startups,” he tells ISRAEL21c.

Familiar with cloud technology and wireless capabilities, Tzori used his practical experience to create a technology that senses the thirst of all kinds of fruit trees and vegetables that a farmer might grow.

His wireless devices can be placed in various parts of the orchard to determine when the trees need watering. They work in coordination with the automatic irrigation system so that the plants essentially choose when to drink.

“Of course plants don’t really drink like people do,” says Tzori. “We can drink a coffee or a soda even when we are not thirsty. Plants don’t behave like this. They take in water only when they need it.”

He explains that there is harm in both overwatering and underwatering. Farmers generally use educated guesses to maintain the proper balance.

CommonSensor allows farmers to use less water while enlarging their planting region. Doing more with less is the key, especially in drought-prone areas like California.

The device also offers the farmer handy graphs and outputs to reveal conditions such as plant stress, Tzori tells ISRAEL21c.

CommonSensor was officially founded in 2001 by Tzori with three of his sons, all graduates of the Technion-Israel Institute of Technology. A fourth son went on to become a lawyer.

Over the years, the CommonSensor device has been transformed and updated. Tzori is seeking distributors for his latest model. He also plans to meet with universities and research institutions that might be willing to use it in research. 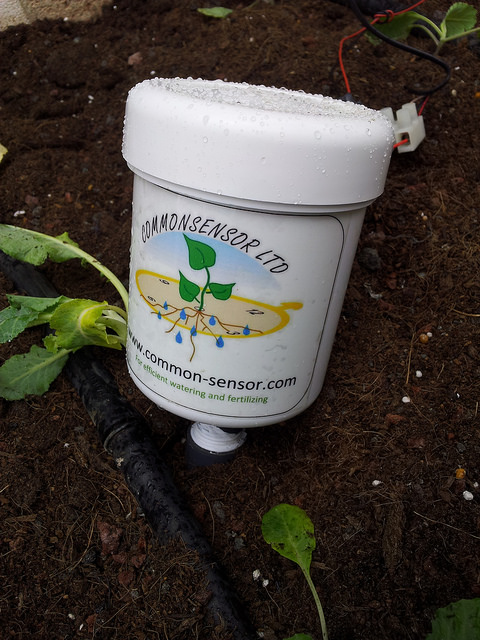 The wireless device can be placed all around an orchard.

For many years, Tzori’s farm of 60 dunams (approximately 15 acres) has yielded peaches, grapes and even turkeys, and doubled as a living laboratory for Israeli researchers from the Weizmann Institute and the Volcani Center-Agricultural Research Organization run by the Israeli Ministry of Agriculture.

The idea for CommonSensor came up around the time Tzori retired at age 65.

“I wanted to start a new circle in my life. This is something you can do only when you go to retirement. Before that, you are in a framework that doesn’t really let you start new things, or which allows you to do the things that you really enjoy. But one of the things that a farmer asks himself is ‘How much should I water?’ This is a big question in intensive agriculture, and you can’t get around it.”

The CommonSensor wireless device registers how much water is in the soil, rather than measuring pressure or humidity. According to Tzori, this basic parameter can be crunched in such a way to understand many things about plant behavior.

For a farm about the same size as his, one unit might be enough to support the smart watering system, says Tzori. Each unit costs in the ballpark of $1,000 and can be ordered directly through Tzori’s website.

The patented device can even work on rooftop urban gardens.

The Hebrew version of the children’s song “Old MacDonald” is “Dod Moshe” or Uncle Moses. This Moshe is more than an uncle. He’s a grandfather to 14. And age in Israel is really relative.