Amit Savaia, now 28, went to Africa for three months to volunteer after finishing his first degree in science. With four other Israeli students from Beersheva’s Ben-Gurion University of the Negev, he helped build a computer platform to connect African farmers with their neighbors.

What tugged at his heartstrings, though, was the problem of schistosomiasis, the “snail fever” caused by ingesting parasites. This disease causes the characteristic swollen bellies in African children.

While mortality rates are low from snail fever, it is the second most socioeconomically devastating disease in Africa, after malaria. The chronic illness can damage internal organs and can lead to slowed growth and cognitive development. In adults, it carries an increased risk of bladder cancer.

Savaia vowed to help Africa beat this problem. Today, earning a master’s degree, he is working with the Bill & Melinda Gates Foundation-funded organization Project Crevette to develop a natural way to stop schistosomiasis in Senegal — using cultured prawns based on research from Ben-Gurion University.

He is concentrating his efforts on the local watering hole in the Lampsar Village in Senegal. Savaia tells ISRAEL21c that it’s next to impossible to get the villagers to stop swimming and urinating in the water, which keeps the parasitic cycle going. 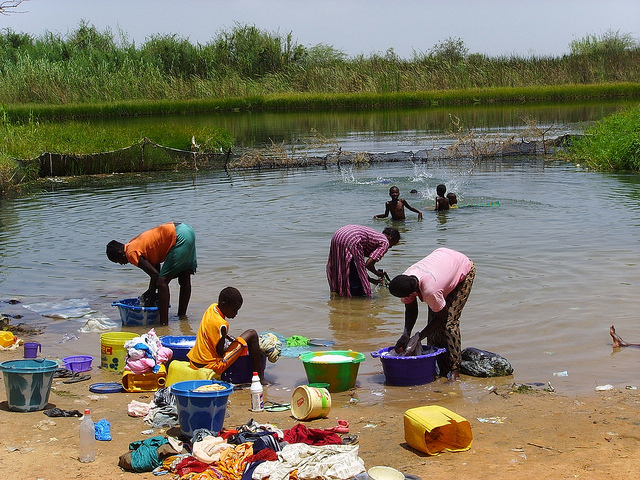 This watering hole in Senegal is a breeding ground for snail fever.

Says an impassioned Savaia, now looking for funding to take his research to the final stages: “Schistosomiasis, also known as bilharzia, has no sustainable cure or treatment. The only drug used today to heal the people is an old drug called Praziquantal (PZQ), which kills the mature worms inside the body. There is no vaccine, even though a lot of companies are trying to make one.”

The back story is that a river in Senegal was dammed, and consequently female prawns – natural predators of snails — were blocked from laying their eggs. The parasite-carrying snail population in the watering hole skyrocketed, and the snail-fever parasite grew with it.

Working on the project since 2012, Savaia proposes using advanced breeding methods to reintroduce prawns to the river. The catch is, these prawns are particularly delicate and hard to grow, especially in captivity. “Not many people have done it before and we had only one reference on how to do it,” he says. 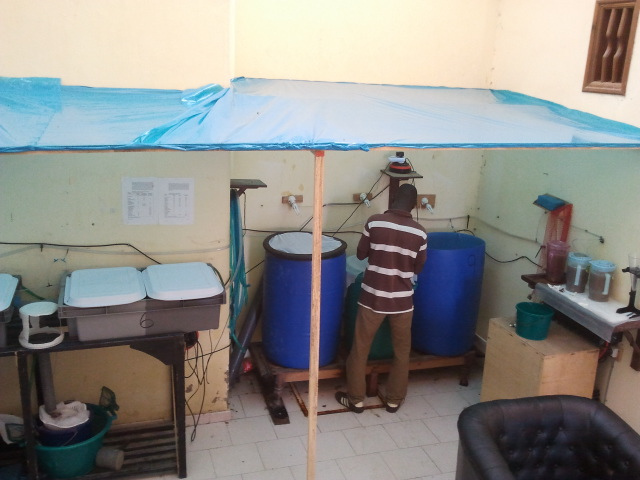 But he has much hope for the approach. It is innovative, sustainable, and creates a triple winning situation for the farmers, villagers and fisherman, he says.

When he is able to prove the concept, “it could be applied in many more countries. These prawns are distributed almost all over the west coast of Africa. Senegal isn’t the only place where a dam started such a problem.”

They have learned that the larvae of this prawn species need to be reared in saline water for two months. After that, the crustacean goes through 14 cycles, or 15 molts, to become post-larvae of a small adult prawn.

Up until this point, “The animals are very delicate,” he says.

When they are reintroduced in the dammed river, they successfully eat the snails that harbor the parasite. A negative cycle is stopped. The question is how to turn this basic research into a project that Africa can do for itself.

Savaia has been strongly affected by seeing, first hand, the damage that the parasites do.

“I must say when we go to the villages you don’t see those awful pictures of children with big stomachs, and extremely sick people, because they stay at home or in hospitals,” he says. 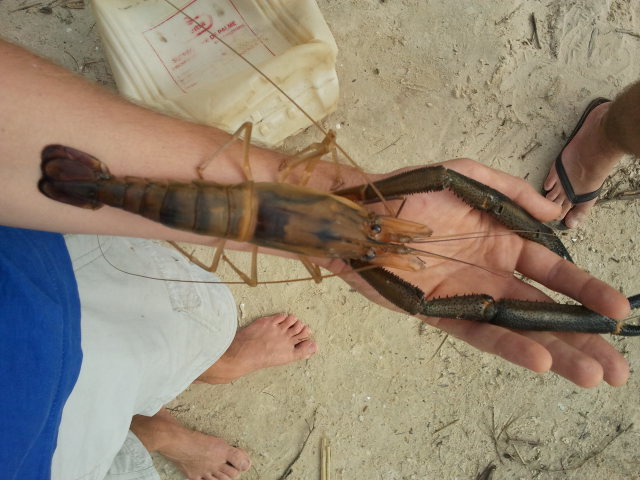 This is a mature African river prawn.

“But when you take their urine and you filter it in order to know how sick they are [by counting how many eggs are in the sample], we find urine as red as blood. This comes from the eggs sitting on their kidneys and intestines.”

Savaia’s dream is big, but he’s unstoppable. “We want to make farms to teach farmers how to produce the prawns so they can sell some for the markets as a crop, because they are delicious, and the rest will be released in the river with an agreement of the health ministry.

“This way, everyone will be happy,” concludes Savaia.