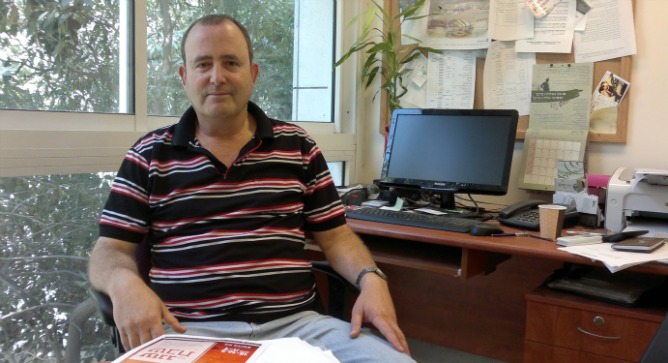 You can sign up for lots of activities at Jerusalem’s Ginot Ha’Ir Community Center – gardening, pottery, martial arts, you name it – but that is not what makes this three-branch institution stand out.

Ginot Ha’Ir (City Gardens) Community Council was built on founding director Shaike El-Ami’s belief that community members themselves must determine the character of their community center rather than the professionals who run it.

To the many Israeli and overseas community center professionals who come to see how he runs his organization, El-Ami explains that he is spearheading no less than a revolution in Jerusalem.

“I call it the community revolution, the next step for Israel’s social agenda,” he tells ISRAEL21c. “It is the idea that the responsibility, anywhere, for quality of life and culture should come from the public, not from city hall or from the synagogue.”

El-Ami is a contender for the job of CEO of the Israel Association of Community Centers (IACC). If elected, he pledges to spread his vision to the 160 other centers and beyond, as the IACC cooperates with international partners to develop and promote training in communal service.

“My position in the Jerusalem picture is about ‘community ability,’ the concept of public involvement in the civil society of the city,” says El-Ami, who also heads Yeru-Shalem Coalition for an Inclusive Judaism, founded in 2011 to highlight and strengthen Jerusalem as a pluralistic urban center where Israelis and tourists can feel at home in its public spaces, institutions and services.

“Who holds responsibility for the culture of the community?” El-Ami asks. “My agenda is that it should belong to the community.”

Accordingly, Ginot Ha’Ir gets just 15 percent of its budget from the municipality. About 65% is generated by member fees, while the remaining 20% comes from fundraising.

“It gives us a lot of independence,” he says. “We work with the city, but what we are really doing is providing a space for the people in our confederation of neighborhoods. It’s about making added value for the community.”

Born on Kibbutz Sa’ad in 1959, El-Ami served as an officer in the tank corps, then studied education, Jewish philosophy and history, and taught high school. In 1989, he helped establish Beit Midrash Elul, a groundbreaking pluralistic Jewish study hall whose employees and students come from a wide cultural-religious-political spectrum.

Before taking over as director of a small community center in Jerusalem’s Morasha neighborhood, El-Ami owned and managed Zusha, a legendary Jerusalem pub that fused contemporary pop culture with aspects of Jewish tradition.

“All my life is about trying to combine between religious and not religious, community and culture,” he says.

Twelve years ago, he took on the task of revitalizing the long-dormant community council that is now Ginot Ha’Ir, based in a large, friendly edifice on trendy Emek Refaim Street that also houses the Orthodox egalitarian congregation Shira Hadasha, which serves as a model worldwide.

“I came to this building and founded [the council] with a big deficit and a lot of ghosts,” he says. “We reestablished the place as the core of a new community organization.”

El-Ami shows ISRAEL21c a thick brochure filled with photos of smiling kids, young families and senior citizens involved in a host of activities at Ginot Ha’Ir, including ecology, music and open dialogues.

But he stresses that what the council does not do is just as important as what it does do.

“For me, the measure of success is not how many activities we offer but how many people are involved,” says El-Ami, who sees himself as a facilitator more than a manager.

A survey of local activists paints a picture of a highly accessible chief executive. One wrote: “Shaike’s keyword is ‘Make it happen’ — not ‘I will do it for you’ but ‘I will give you the staff, budget and space to make it happen.’ He does not say if something is a good idea or not. He says, ‘Take the responsibility; I’m behind you.’”

El-Ami and his wife, Hagit, raised their four children in Efrat, just south of Jerusalem, for 21 years. Last year they moved to the city to which he has devoted his life.

“I understand that to take a strong position in civil society it has to be personal and not just professional,” he says. “I can’t make a revolution for Jerusalem from Efrat.”

He tells his frequent overseas visitors that the world’s Jewish community centers won’t survive if they don’t follow his lead in strengthening civil society. “It’s not enough anymore to have a pool or a gym. People are looking for added value. So let the community take responsibility for itself,” advises El-Ami.

“The government cannot take care of values. True values, in my opinion, come from the bottom up.”

UNCOVER ISRAEL - Get the ISRAEL21c
Weekly Edition free by email
Sign Up Now!
Bring Israel's story to life.
Millions of people around the world rely on us to gain a deeper understanding of Israel. We are the trusted source for original content you won't find anywhere else.
You can make a difference. Donate today to support journalism that brings Israel’s story alive.
SUPPORT ISRAEL21c
Read more on:   People, Social Action, Ginot Ha'Ir, community