Wouldn’t it be nice to control the temperature in your home without having to calculate your comings and goings during the day and night? How about getting up in the morning on a cold day in a toasty house without pre-timing a thermostat? What would it be like to get home to a cool apartment after being outdoors in a heat wave, without leaving the air conditioner running in your absence?

An Israeli startup called Sensibo has created a device that can do all those things and more by connecting to the Internet and collecting information to communicate to your air conditioner what it should be doing – or not doing – at any given moment.

Founded in November 2013 by Omer Enbar, 32, and Ran Roth, 34 (friends from their days in the IDF, where they served as algorithm developers and researchers in the 8200 intelligence unit), the Tel Aviv-based company with a staff of four got its start with seed money from venture capital funds and private investors.

Each Sensibo pod is powered by two micro-processors and can be used with any A/C that has a remote control. It will come packaged with a free app for iPhone, Android and Pebble that’s compatible with all smartphones, tablets and computers.

Enbar and Roth say they designed the Sensibo pod to be user-friendly. Remote control commands are pre-installed, ready to communicate with your existing A/C. If you’ve got a Samsung in the living room, an LG in the bedroom and a Friedrich in the study, Sensibo will control all of them with one interface. 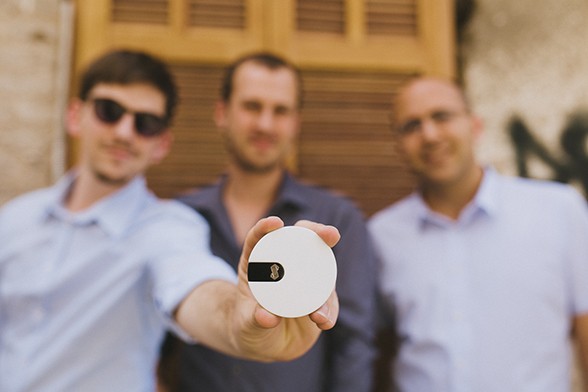 The founders honed their smarts in the 8200 intelligence unit.

The pod is small and light, and mounts onto almost every type of air conditioner in the world with two-sided tape (refills are included in the package). This means that consumers living in rental apartments can take it with them, even if they are leaving the A/C behind.

As the amusing demonstration video illustrates, all that’s required is to pull it off one unit and stick it onto another.

Sensibo is currently engaged in an Indiegogo crowd-funding campaign that raised half of the $70,000 goal within 48 hours of launching on May 20. It’s a pretty sure bet that it will meet its goal on schedule, by July 4, in order to begin mass-manufacturing the product.

A cool niche that needed filling

The idea for Sensibo came to Enbar in 2005, when he was frustrated with the functioning of his air conditioner.

“I asked myself why, in the 21st century, I still have to fiddle with a remote control?” Enbar recounted to ISRAEL21c. “It seemed ridiculous.”

So he did what any tech-savvy Israeli would do: He wrote software that enabled him to send an e-mail from his computer to his remote control. But it was still too “primitive” a system, as far as he was concerned.

“A few years later, once smartphones became widespread, I was certain I would be able to purchase an app for this purpose,” he said. “But it turned out that the only thing available was the Nest learning thermostat, and not for the majority of remote-controlled air conditioners on the market.”

It was this that spurred Enbar to join forces with Roth to work on prototypes to test on the air conditioners of family members and friends, developing thermodynamic models with sensors for determining the minimal optimal temperature of a room.

What they discovered in the process was a huge reduction in expended energy.

Other features that save energy: The device lets you know when the air-conditioner filter needs cleaning or changing; when the outside temperature has cooled off; and when it’s time to turn off the air conditioner and open the window.

And though similar solutions exist – in particular the German startup Tado – Enbar says that Sensibo has unique advantages. For example, it learns the behavioral patterns of its users, and its humidity, light and movement sensors adjust to their presence or absence in the room, automatically turning off the air conditioner when it is not needed.

“It is a niche that needed filling,” says Enbar. “With the added benefit of conserving energy.”