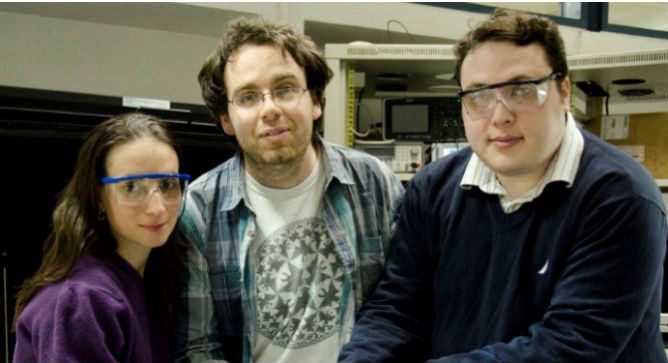 Making a silicon semi-conductor involves carving a sheet of the element silicon, kind of like carving a sculpture out of rock. It’s the most common method of making transistors for everything from cellular phones to computers. But silicon is expensive, inflexible and environmentally problematic.

What if it were possible to make transistors from ordinary materials simply by coating them with readily available proteins — for instance, human blood, milk or mucus?

That may seem really yucky, but biologists and chemists from Tel Aviv University say this nanotechnology approach is a flexible, “green” and inexpensive way to power the next generation of electronic devices.

Their research, published in the journals Nano Letters and Advanced Materials, received a silver award at the fall 2011 Materials Research Society Graduate Student Awards in Boston.

Working with blood, milk and mucus proteins — which naturally self-assemble into a semi-conducting film — PhD students Elad Mentovich, Netta Hendler and Bogdan Belgorodsky succeeded in taking the first step toward biodegradable display screens, and they aim to use this method to develop entire electronic devices.

A new era of technology

In combination, the three types of proteins create a complete circuit with electronic and optical capabilities, each bringing something unique to the table, Mentovich said.

The natural abilities of each protein allow for control over the resulting organic transistor, allowing adjustments for conductivity, memory storage and fluorescence, among other characteristics.

According to Mentovich, technology is now shifting from a silicon era to a carbon era, and this new type of transistor could play a big role. Transistors built from animal proteins will be ideal for smaller, flexible devices made of plastic rather than silicon, which shatters like glass if bent. The breakthrough could lead to a new range of flexible computer screens, cell phones and tablets, biosensors and microprocessor chips.

Just as significant, the products will be biodegradable in answer to the growing problem of electronic waste overflowing landfills worldwide.

UNCOVER ISRAEL - Get the ISRAEL21c
Weekly Edition free by email
Sign Up Now!
Bring Israel's story to life.
Millions of people around the world rely on us to gain a deeper understanding of Israel. We are the trusted source for original content you won't find anywhere else.
You can make a difference. Donate today to support journalism that brings Israel’s story alive.
SUPPORT ISRAEL21c
Read more on:   semiconductors, Environment, Clean tech