When a baby is choking somewhere inside the winding cobblestoned streets of Jerusalem’s Old City, or in any Israeli neighborhood, locals powering motorcycles with ambulance gear give help before the paramedics arrive. This is thanks to Israel’s one-of-a-kind volunteer emergency response organization United Hatzalah.

To minimize response time, Hatzalah contracted local developers to create a smartphone app to help deploy volunteers closest to the emergency –– or to send mission alerts to doctors with certain specialties.

Now this app has been turned into a company with profits. Israel’s NowForce is today a powerful application that can turn a dozen or more smartphones into an emergency response fleet.

“You could say that United Hatzalah was our first customer,” says Julie Zuckerman, VP of marketing. “If you see the TEDMED Talk by the United Hatzalah founder Eli Beer, he says that the three reasons for his organization’s success are ambucycles, volunteers and our technology,” she tells ISRAEL21c.

NowForce, founded in 2008 by three religious Jews, has a product on the market that is being used in America by volunteer firefighting forces and tournament organizers. It is also in place in Nigeria to coordinate emergency teams and police.

The company has developed two apps: one for community members and another for response organizations.

These apps can communicate with each other through the smartphone, so that emergency requests and response teams can be matched quickly and safely to save lives and keep people and assets secure.

Let’s say Jennifer, a law student in New York, suddenly feels an unwanted presence behind her at night. If the NowForce app is licensed by her school and then uploaded by her, she can tap or swipe the screen to provide an alert to the call center to come help.

The control room can deploy police or volunteers to meet Jennifer at her exact location, even if she is unable to speak.

Theoretically it could also be used during terror incidents, kidnappings or bank heists to quietly alert forces about what’s happening behind closed doors.

“We allow for all kinds of data communications,” says Zuckerman. “If you can’t talk, you could send SMS messages or images to let the control room know what’s happening.”

The app can be programmed to work with dispatchers, or to deploy response teams or individuals automatically based on expertise or location.

The ready-made, low-cost solution can be used by volunteer firefighting units, private security companies or even workers who need to cross borders that may be volatile or dangerous, says Zuckerman. The company already works with a foreign company in this field. 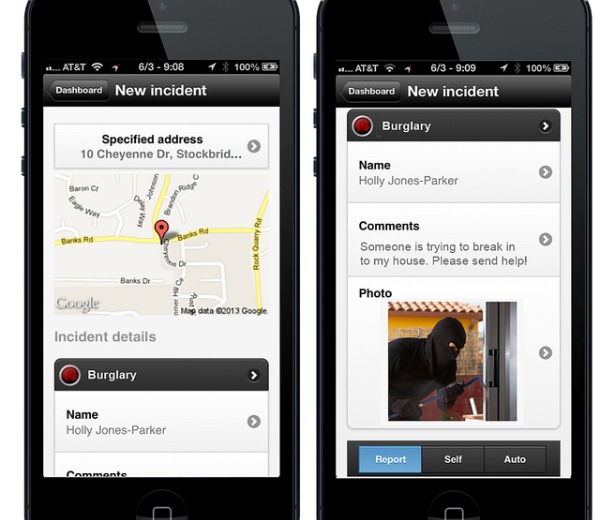 “The main benefits here are for people or organizations that need a response time in minutes and maybe even in hours. As a startup, that is where we see the greatest need,” she says.

Security is obviously an important consideration. Extra measures are built into the NowForce cloud to keep data from prying eyes. But companies with their own servers and communications systems, even ones that work by satellite, can integrate NowForce on a custom basis.

Volunteer firefighters can “pay a couple of dollars a month per user and it’s really much more affordable than a large-scale multiple-million-dollar dispatch system.”

Boone County Fire Protection District is using NowForce to arm the largest volunteer fire department in the state of Missouri. The district runs 14 fire stations within a 500-square-mile area. They must coordinate a volunteer force of more than 250 firefighters and emergency responders to answer more than 4,000 calls every year.

One company in Nigeria is using NowForce as a mobile command control to revamp its security infrastructure.

There is a huge market in the developing world, says Zuckerman. “By 2012, there were already 650 million mobile phones in Africa, more cell phones than landlines. In Nigeria, they have been using our system to dispatch the police and they are expanding it to all their emergency and public safety agencies like EMS and fire. The main benefit is that they can locate, alert and dispatch responders wherever they are.”

NowForce doesn’t always require a data plan to work. If there is an unusual scenario — maybe the data networks are down or you are in the middle of the desert — there are other ways of activating the system, Zuckerman explains.

“We did a field trial with a staged mass casualty event, and an army set up its own network. Within 90 minutes, all 200 different casualties had been responded to using satellite communications,” she relates.

NowForce employs 20 people in Jerusalem, with an office in Washington, DC. Its three founders come from backgrounds in paramedics, security and the air force.

The company saw more than a 250 percent growth in sales last year and now seeks an investment of $2 million to $4 million to forge ahead in the market of emergency response software.