An Israeli scientific breakthrough could allow pig organs to be transplanted into humans. This is a promising solution to an acute shortage of organs for transplant.

The domestic pig is an excellent potential source of donor organs for humans. Pigs are easily available, and their organs are closer in size to human organs than are organs of non-human primates.

The problem is that pig organs are rejected by the human body, explains Dr. Shahar Cohen of Israel’s Rabin Medical Center.

“Now we can modify pig organs in a way that the human immune system won’t recognize them as pig organs. That would mean an unlimited supply of organs.”

This would answer a huge unmet need, Cohen tells ISRAEL21c.

“Statistics show that more than 100,000 people in the United States alone are waiting for lifesaving organs, and 20 [Americans] die every day waiting for organs. The true numbers probably are much higher,” he says.

“The number of available organs hasn’t really changed but demand is rising due to trends in the population having to do with aging and chronic diseases.”

Order a hybrid organ off the shelf

Cohen explains that the rejection process is known to begin in the innermost layer of the lining of blood vessels in the donor organ.

This layer of cells, the interface between donor and recipient, tips off the immune system to the presence of a foreign organ. The immune system responds by activating the rejection process.

Antirejection medications prevent that activation, but only when the foreign organ is human.

Cohen says some scientists have attempted, unsuccessfully, to reengineer pig organs for acceptance in the human body by removing all their cellular materials and leaving a sort of shell in which to build a new organ from scratch using human cells.

“We thought, why remove everything rather than target the most important player – the internal lining of the blood vessels?” says Cohen.

The removed animal cells would be replaced by human-derived cells that would respond to antirejection meds. 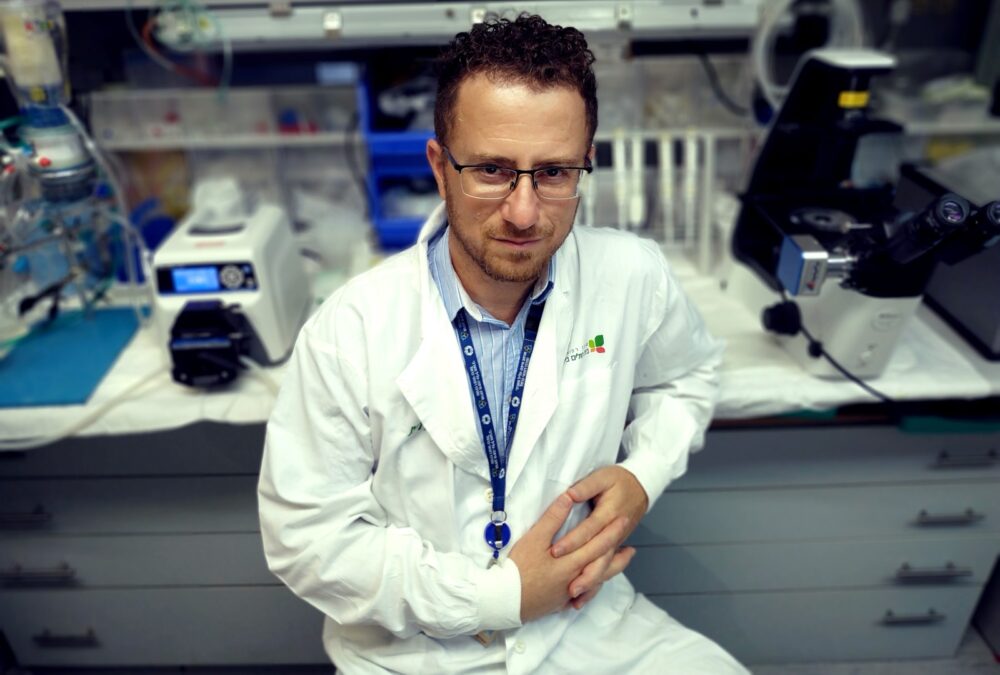 “It’s a major shortcut, very practical and relatively easy to do compared to building the organ from scratch.”

These hybrid organs could be prepared in a controlled way by an adaptation of an existing device, a perfusion machine, which preserves organs to be transplanted.

In this way, says Cohen, an abundant supply of hybrid organs could be prepared and stored. Transplant surgeons could simply order them as needed, right off the shelf.

The magic of placenta cells

For the past four years, Cohen and his team at Rabin Medical Center’s Beilinson Hospital, Israel’s busiest transplant center, have honed their groundbreaking technique for making hybrid organs.

They can remove the inner lining of blood vessels from animal lungs, kidneys, and even limbs and rebuild the lining using cells from human placentas. 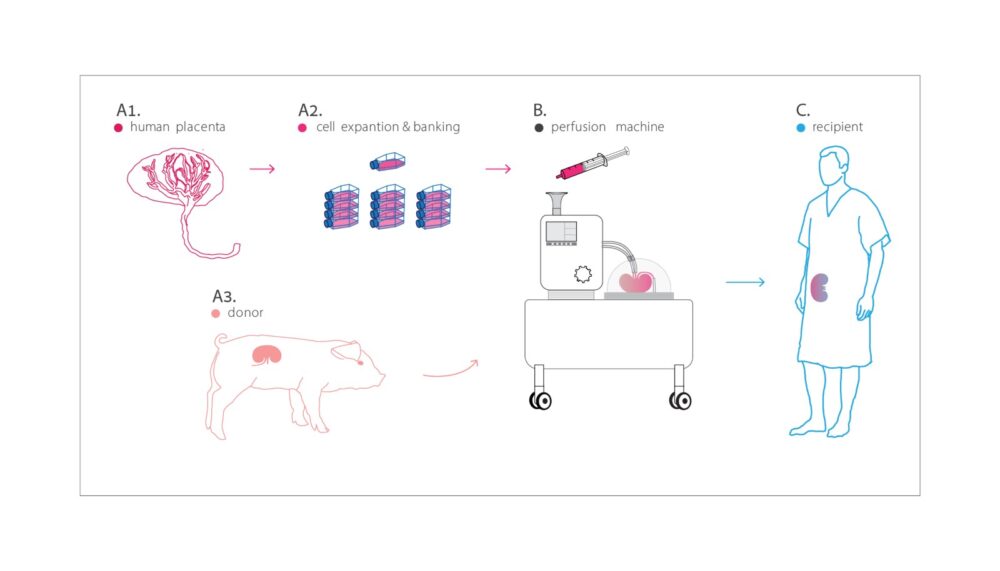 “Why the placenta? It’s available in large quantities, it’s a vascular organ containing what we need, and placenta cells are unique in that they aren’t rejected,” he explains.

After all, the placenta connects two human beings — and the mother can’t reject her fetus. It is therefore possible that hybrid-organ recipients would not need high doses of antirejection drugs.

Tissue typing (also called HLA typing) of the placenta-derived cells before the reengineering phase could improve immunological compatibility between the hybrid organ and the recipient, Cohen says.

Cohen is a physician, researcher and entrepreneur with 15 years of experience in stem-cell biology and tissue engineering. He’s also founder and CEO of Nayacure Labs, an early-stage regenerative medicine company.

The innovation in the hybrid organs is the biology, not the engineering, he says.

“We have showed so far the ability to replace the entire vascular lining. Next, we’ll do studies in animals and then in humans. In approximately five years we should be able to perform the first human clinical trials transplanting hybrid organs — pig organs with a human lining of blood vessels.”

Cohen believes the approach can be applied to any body part that can be replaced.

Results of Cohen’s studies with his colleagues were published in Scientific Reports on June 28.

“We received reactions from colleagues all over the world; everyone is excited,” he tells ISRAEL21c. “It’s something that makes a lot of sense and is clearly the right way to go in offering a real solution to a huge problem.”