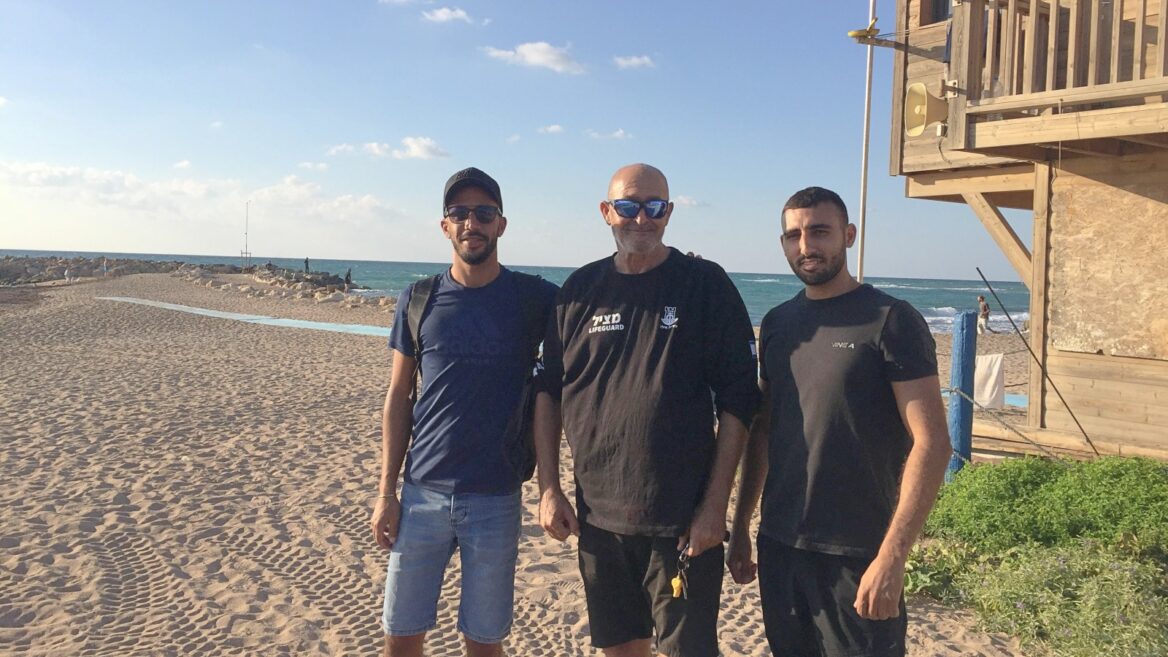 It was the last hour of the last day of the official summer season in Israel.

I biked over to the beach in the village where I live, Shavei Zion in the Western Galilee, to say goodbye to the beach employees.

The staff of three Arabs and three Jews had been working together from sunrise to sunset, every day, since March 15. I wanted to talk to them, to thank them for a job well done.

There is rarely a day that I’ve missed going to the beach since I moved to this village in 1991. I’m drawn to that turquoise bluish-green water. Those startling white waves. The indelible line on the horizon where the sea meets the sky. 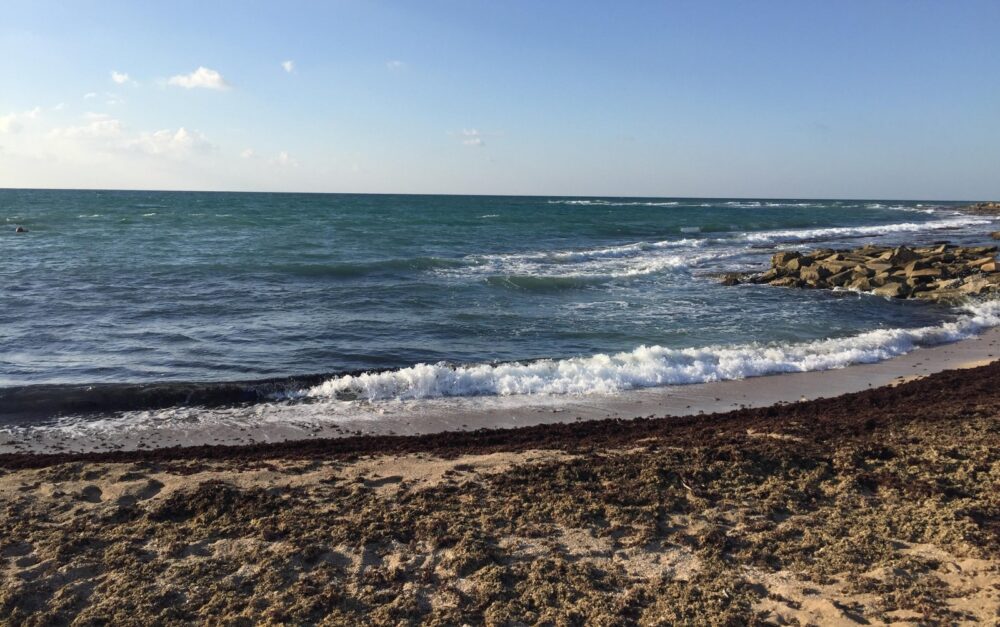 The beach at Shavei Zion. Photo by Diana Bletter

I climbed up to the second floor of the lifeguard station.

There weren’t many minutes left to their last shift, but the lifeguards still had their binoculars and life preservers handy, ready to slide down the pole, like firefighters in a fire station, for one final emergency.

“We had a good season, no problems,” said head lifeguard Gabriel Perez, who has worked at the beach for the past 15 years.

“I remember when we saved those four kids from the rocks,” said one of the assistant lifeguards, Ali Srhan, 28, who lives less than four miles away in Akko (Acre). He already sounded nostalgic.

“Mothers bring their kids to the beach and let them go in the water while they look at their phones,” added Bassel Hlwe, 27, the other assistant lifeguard, from Abu Sinan. “We can’t take our eyes off them.”

We all gazed for a moment at the sandy beach with its jetty built by the early members of Shavei Zion, an agricultural cooperative moshav founded in 1938.

When I moved here, it was a rural farming village, more cows and chickens than residents. We may soon have a luxury hotel on our shoreline, drawing more traffic and more tourists.

But there’s always the beach, the sea, the sun. 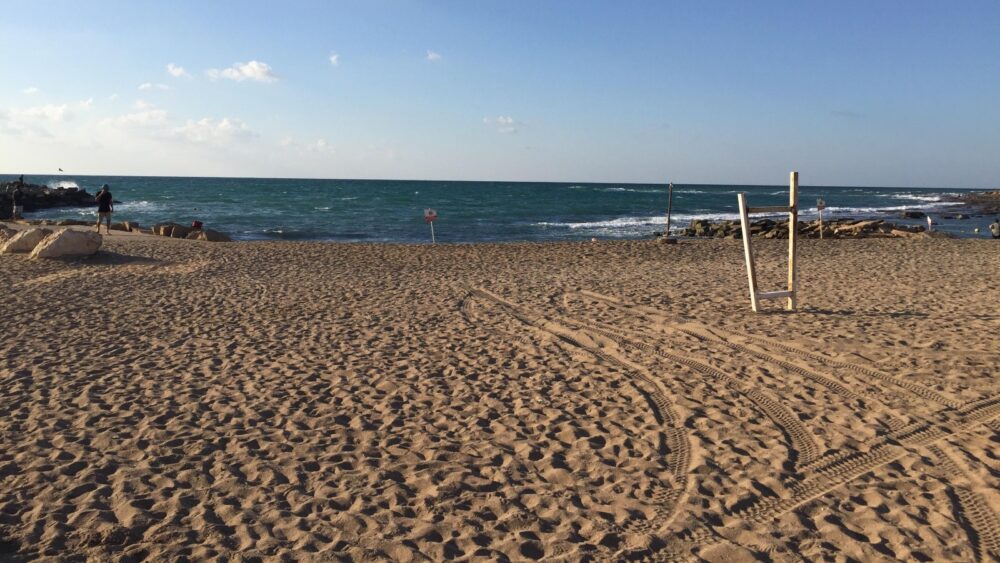 The beach at Shavei Zion on the last day of swimming season. Photo by Diana Bletter

On summer mornings when I’ve gone swimming at dawn, one of the first people I saw was Amin, who has been on the beach maintenance staff for the past six years. Now he told me that the men on the staff consider their job to be “more for medicine for our souls than for the money. This beach is like our home.”

Amin is a Muslim Lebanese who fought with the Southern Lebanese Army in the 1990s. He came to Israel on May 25, 2000, when Israeli troops withdrew from Southern Lebanon.

He said he can’t speak to his four adult children still in Lebanon; he has three other children who grew up here, first on a northern kibbutz and then in the border town of Shlomi. He said they now have good jobs here in Israel.

“I never learned to read or write,” Amin said. “But I’ve studied life.”

Next to Amin sat Yehuda Gruber, who has also worked on the beach staff for several years. When I asked what he would do once the beach closed, he said, “I’m here today. Who knows where I’ll be tomorrow?”

Lowering the flag at the Shavei Zion beach. Photo by Diana Bletter

Gruber plans to visit one of his children in America and another who lives in the Dominican Republic.

Perez, the head lifeguard, told me that after seven months of constant work, “it’s like I’m shutting the door and another is opening.”

But Hlwe admitted he feels sad.

Srhan and Hlwe have been best friends since they took a lifeguard course in Haifa 10 years ago. Once the season is over, Srhan will go back to his winter job, catching fish for restaurants in Akko. Hlwe will look for work until the next beach season begins.

At precisely 5pm, Perez got on the loudspeaker the way he did each day throughout the season.

“The beach is closed and swimming is prohibited,” he announced. Then he couldn’t help himself and added, “Until next year.”

I watched Hlwe lower the red lifeguard flag from the flagpole and fold it for the last time.

At that moment, I wanted it to be endless, the summer, filled with suntan lotion and sandcastles and waves to ride.

And right then, I especially wanted to continue experiencing this sense of camaraderie with the lifeguards at the beach. After last year’s riots and tension, it means even more that three Muslims and three Jews are working together and sharing stories.

The summer has just ended — but I’m suddenly brimming with hope.

Diana Bletter is the author of the National Jewish Book Award nominee, The Invisible Thread: A Portrait of Jewish American Women. She has written a novel, A Remarkable Kindness (HarperCollins) and a memoir, The Mom Who Took Off on Her Motorcycle. Her work has appeared in The New York Times, The Wall Street Journal, Commentary, tabletmag, and other publications. A former New Yorker, she now lives with her family in the Western Galilee.

UNCOVER ISRAEL - Get the ISRAEL21c
Weekly Edition free by email
Sign Up Now!
Bring Israel's story to life.
Millions of people around the world rely on us to gain a deeper understanding of Israel. We are the trusted source for original content you won't find anywhere else.
You can make a difference. Donate today to support journalism that brings Israel’s story alive.
SUPPORT ISRAEL21c
Read more on:   Spotlight on Israel, Tales from the heart, Coexistence, Beaches in Israel