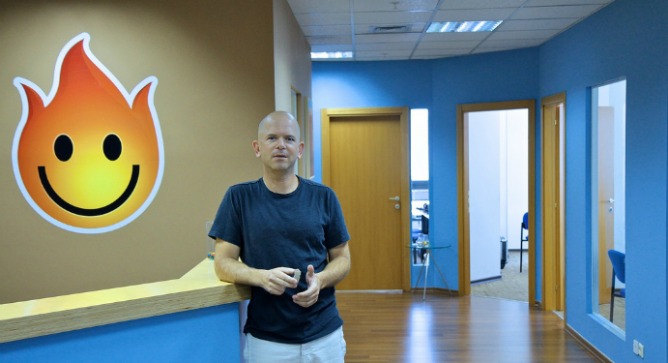 Complaining about slow Internet connections has become the digital age’s national pastime. Everyone hates waiting for graphics-heavy websites and YouTube videos to sluggishly load. It gets even worse the farther you are from the source – a malady Israeli Internet surfers have long suffered from when trying to access US sites.

That’s all set to change with the launch of a new technology from the Israeli startup Hola that promises to increase connection speeds as much as tenfold. When ISRAEL21c tried it, the tech really worked.

Ofer Vilenski and Derry Shribman are the geeks behind what CEO Vilenski describes as “how the Internet should have been designed in the first place.”

Hola (the name means “hello” in Spanish) began almost as a whim. It was 2006 and the pair had just sold their previous company, Jungo, to NDS (now Cisco) for $107 million. Vilenski and Shribman were poised to retire.

“I didn’t plan on working anymore,” he tells ISRAEL21c. But he and Shribman decided to “play around” with rethinking how computers connect over the Internet. After 20 days, they’d come up with an unexpectedly elegant design, Vilenski says. “We spent less than a month unemployed,” he jokes.

It’s taken the pair more than four years and 30 patents to get to the launch point. And, oh yes, some $18 million in outside investment from serious VC players including Hong Kong billionaire Li Ka-shing’s Horizon Ventures, which has been on an Israeli investing spree of late.

The elegant part of Hola’s approach is that it doesn’t require any rewiring. Users simply agree to share part of their computers’ hard disk space and processor speed with other users.

Shooting for a billion users

The first time a request is made for a new web page, tens of little pieces of that page are copied (“cached”) to Hola users’ machines. That doesn’t speed up the initial request, but every time that page is accessed again, the next person’s computer looks for the pieces cached on other Hola users’ computers, which may be just a block or two, not a thousand miles away from where the website’s main server may be located.

“Think about the Internet as a road system,” Vilenski proposes. “When you commute to work in the morning or home in the evening, there are lots of traffic jams. But what if everyone worked only a half a mile away from their own homes? There becomes less traffic on the Internet as a whole.”

Of course, this scheme only works when there are a lot of Hola users. Vilenski is thinking big, in the billions. “Will we be successful if we only have a few million users? No way,” he says.

For that reason, Hola is giving away its solution for free. Vilenski insists there are other as yet unspecified moneymaking opportunities down the road.

“Think of the pop singer, Adele. What if she gave all her songs away for free?” Vilenski asks. “She’d still make money — from merchandising, from shows. The difficult part is getting a billion people to follow her. I want Hola to be the kind of singer that reaches a billion people.”

If you’re worried that installing Hola on your computer will slow it down, Vilenski says not to. “We will only use your CPU when you’re not at your computer. And when we write our cache data to your computer, it’s to the empty spaces in your disk. Your computer still sees all that space as free and if your computer needs it, it just overwrites our data.”

Restoring democracy on the Internet

Hola is available for Windows-operated computers as well as for Android mobile devices. iPhone and Mac versions are due out later this year. With no marketing whatsoever, 15,000 people have downloaded the program.

There is a second use for Hola that Vilenski’s team stumbled on by accident. One day, Vilenski realized that an employee was listening to Pandora, a Web service available only in the US, by using Hola technology. It turns out that distributing tiny chunks of websites to individual Hola users’ computers has the side effect of “anonymizing” the Internet, as Vilenski puts it. That means users in Israel and elsewhere can suddenly access sites formerly off limits.

“At first we thought this was a negative,” Vilenski says. Understanding where your users are is a key driver for the Web; it powers everything from custom content to advertising.

But Hola’s Media Unblocker has turned out to be quite popular, with 7,500 downloads in just its first 10 days. The unblocker app is available as an extension to the Chrome browser – including on the Mac – and is immune to getting re-blocked, Vilenski claims.

Right now, three big US sites are available to Hola users everywhere – Hulu, Netflix and Pandora – but the rest are on their way. Vilenski tried the unblocker in China and was able to access Facebook, normally not available in that country.

“The Internet was supposed to be an open platform, where everyone could communicate and anyone could see any content. This restores democracy. We’re opening things up again.”