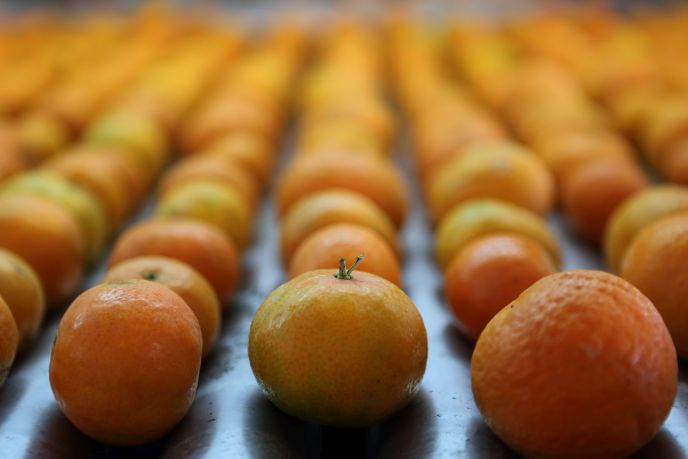 Almost 30% of fruits like Jaffa oranges are lost to wastage on route to the customer. Photo by Yaakov Naumi/FLASH90

Almost 30% of fruits like Jaffa oranges are lost to wastage on route to the customer. Photo by Yaakov Naumi/FLASH90

Nimrod Ben-Yehuda is on a mission: to feed millions of starving children worldwide. Not, the lifelong farmer explains, by producing more food, but by dramatically cutting wastage on route to the consumer.

The company he founded 15 years ago, Pimi Agro CleanTech, has a unique, environmentally friendly line of products to keep fruits and vegetables fresh for as long as 10 weeks, drastically reducing deterioration during transport.

About one-third of food never makes it to the marketplace; in developing countries the figure is usually higher. Spoilage, disease and transportation issues whittle away producers’ and marketers’ profits – and raise consumer prices.

“Before being sold, all produce is sorted. Thirty percent gets thrown away, and what’s left hardly lasts a day before being replaced,” says Ben-Yehuda, who dates his concern back to his days as a teenaged kibbutznik working in the fields.

“I was amazed at the amount of fruit and vegetables thrown away in the packing stations. I saw piles of rotting peppers and tomatoes — meanwhile children are going hungry. It’s crazy!”

Already his young mind was working on a solution.

“The critical period is from the time the fruit is picked to when it begins to rot,” Ben-Yehuda tells ISRAEL21c. “Take a single eggplant, for example. We cut it from its lifeline when we pick it. It’s all alone, and has to survive. Inside, its body systems weaken; it uses up all its sugars and goes into stress, with telltale signs. The fruit rots because it’s weak inside.”

Pimi’s zero-chemical method of preserving produce is not the result of some momentary flash of brilliance.

“I first had the idea 25 years ago,” says Ben-Yehuda. “It evolved from ecology, and it was difficult to overcome skepticism and get investors interested at first. Honing it into a working project took a long time.”

The next stage was checking with farmers over at least two seasons for each crop – which was not as simple as it sounds. “No two seasons are the same and variable climate conditions have to be taken into account,” Ben-Yehuda points out.

“Most farmers are conservative by nature – they stick to what they know works. Coming to them with something new is not easy, but we are lucky in that farmers in Israel are relatively open to adopting new technologies.”

Pimi Agro’s worldwide-patented products are 99.4 percent stabilized hydrogen peroxide (STHP), which returns to nature as oxygen and water, while the other 0.6% is formulated according to the particular fruit or vegetable it is used on.

“Fifteen years of research produced separate formulations for citrus, stone fruits [such as peaches and plums], potatoes, onions and sweet potatoes that can greatly extend produce shelf life,” he notes.

Tests demonstrate that Pimi’s solutions can be as much as 15 times more effective than other preservation and disease-prevention systems. “We found that for citrus fruit in Israel we need only a third of the fungicide usually used,” he says. “Strictly speaking, it’s not organic, but the produce is significantly healthier and has a far longer shelf life.”

“Right now we’re at the breakthrough stage,” says Ben-Yehuda. “We have US Environmental Protection Agency approval and American marketing networks are interested.”

The Western world’s largest retailer, Wal-Mart, and America’s largest shipper of citrus fruit, SunPacific, are conducting large-scale field tests. Major food producers such as Pepsico, FritoLay and BASF are also trying out Pimi’s technology. Other customers from Israel, Germany, the UK, Canada, Japan and Russia also are interested in the simple, affordable solution.

“The material itself will be locally produced,” says Ben-Yehuda. “We’re developing partnerships in the Philippines, in developing countries in Africa, in India, China and South America. It’s all in the development stage with local investors.”

Ben-Yehuda is busy country-hopping, introducing this innovation to international institutions. “We are in contact with the United Nations and World Bank – but are not yet working with them,” he tells ISRAEL21c.

“Developing nations have the most to gain — I visited India and saw mango plantations where the depreciation due to loss can reach 70%. This issue has global implications. If only 30% of produce reaches the marketplace, this affects both prices and availability, and poor people simply cannot buy them.

“It also alleviates the need to plant on greater expanses of land, using more fertilizer and irrigation, to the detriment of groundwater. We live with this reality as if it’s okay – but it isn’t, and it’s in our power to change this.”

Pimi, based on Kibbutz Alonim in the Galilee, concentrates for now on post-harvest.

“The same diseases can be better treated pre-harvest when they’re still on the plant. That’s our next target,” says Ben-Yehuda, who cofounded Pimi after heading Nir Ecology, which develops ecological solutions for veterinary, food industries and hospitals; and Swissteril Water Purifications.

“There will be over nine billion people on the planet by 2050,” he notes. “How are they to be fed if water and land resources continue to disappear? If we save the lost food there will be no more hunger in the world.”