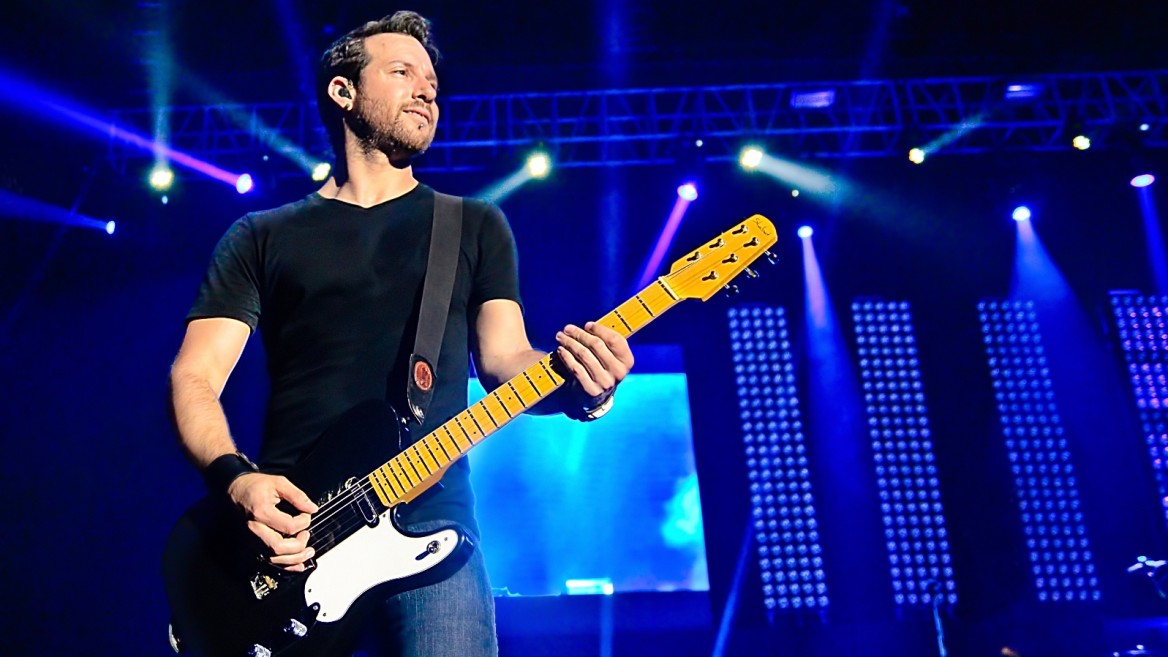 “I rock it as much as I can,” says Hurwitz. Photo by Glenn Tang/Black Pixel Studios

Israeli-born songwriter-producer-guitarist Sean Hurwitz, now touring with Smash Mouth, did not attend Rimon, Berklee or other prestigious music schools that helped catapult many Israeli musicians to success.Long before becoming a guitarist, he was a kikarist – Hebrew slang for a rebellious teenager who hangs out after dark in Kikar Zion (Zion Square) in Jerusalem.

“I was a full-on kikarist, pierced and mohawked,” relates the 35-year-old musician during a Skype conversation with ISRAEL21c from his Los Angeles home.

The son of American émigrés, Sean (whose real name is Shachar) differed from the typical kikarist in that he didn’t get high. “I’ve never taken drugs; never even smoked a cigarette. No one pressured me to do those things.”

Instead, Hurwitz found his outlet in the basement music studio of Bayit Cham (Warm Home), an organization where a Jerusalem kikarist could find shelter, food and counseling.

“Bayit Cham was where I went to practice with a band I was in, and where I met fellow musicians I’m still friends with to this day. Avi Tal, a counselor in the studio, gave me the hardcore focus that was a huge piece of my musical upbringing and a huge chunk of who I am.”

Hurwitz recently took time from his busy touring schedule to play a fundraiser with some of his old buddies for Sobar, a non-profit Jerusalem venture to open an alcohol-free music club and center for at-risk kids.

After “graduating” from Zion Square rather than high school, he studied sound engineering in Tel Aviv and got a job with Shuli Oded, owner of The Musical Connection sound-and-lighting outfit.

“I went in knowing nothing and ended up very high-ranked in the Israeli sound corps. I didn’t do the army; Shuli was my army, teaching me to do things I didn’t think my body and mind were capable of. He taught a 19-year-old how to do a credible job as head of staff, and that was a huge asset to me professionally.”

He worked with Hadag Nahash for a few years, even coming along for their US tours. In 2003 – spooked by a terrorist attack at the Tel Aviv music bar Mike’s Place — he relocated to Los Angeles.

“My parents [Dr. Judy Lieman-Hurwitz and Ira Hurwitz] are from America, so I feel very American,” he says. “My parents are a huge influence on me. They uprooted their whole lives to move to Israel and raise a family, going after their hearts and dreams.”

At the same time, he is a product of his surroundings. “Israel is very dog-eat-dog, and that breeds people that are gonna go for it — that’s why so many Israelis are successful,” opines Hurwitz. “Being raised in that environment helped me get above my competition. I have to think I got some of that ‘I can go do this’ attitude.”

In LA, Hurwitz worked at a Guitar Center store until establishing himself as a session guitarist for seven different bands. In 2011, Smash Mouth hired him to accompany them on a tour in Iraq and Kuwait.

“I had five days to learn an hour and a half of music for Smash Mouth and then take off,” Hurwitz relates. Worse, he did not have the right guitar for the job.

So he called his old friend, bassist Avishay Shabat. On vacation from Israel years before, Shabat had visited Hurwitz at Guitar Center. “He makes and fixes guitars, and there are a gajillion guitarists here, so I recommended he come work in LA,” says Hurwitz.

Shabat took the advice and founded Shabat Guitars, now a successful business. He quickly made Hurwitz a custom guitar for the Smash Mouth gig, and now Hurwitz uses only Shabat instruments.

Smash Mouth, he says, is a great fit for someone who grew up on Eric Clapton, Led Zeppelin and Pink Floyd. “With Smash Mouth I take advantage of my place on stage and I rock it as much as I can. The music is great, the guys are awesome and I get to travel the world.”

He is the only Israeli – indeed the only Jew – in the band best known for “I’m a Believer” and “All Star” from the movie Shrek. “I would love to come to Israel and rock out with Smash Mouth,” says Hurwitz, who will miss his brother’s wedding in Israel this June because of a six-week Smash Mouth tour.

The gregarious guitarist, now also the owner of an LA real-estate company with his fiancée, loves connecting with people on social media. “It’s easy to reach me and I talk to everyone — gearheads, musicians, fans of Smash Mouth.”

UNCOVER ISRAEL - Get the ISRAEL21c
Weekly Edition free by email
Sign Up Now!
Bring Israel's story to life.
Millions of people around the world rely on us to gain a deeper understanding of Israel. We are the trusted source for original content you won't find anywhere else.
You can make a difference. Donate today to support journalism that brings Israel’s story alive.
SUPPORT ISRAEL21c
Read more on:   Culture, People, Sean Hurwitz, Smash Mouth, Bayit Cham, Sobar