When the Israeli crowdsourced traffic app Waze was acquired by Google for close to $1 billion last year, co-founder Uri Levine had a choice to make: continue with his creation at Google, or look for the next sexy segment to be democratized by the power of the crowd. He chose to move on.

Levine’s latest product is just about ready to take the United States by storm, after having been live in Israel for the last year. The subject of his new venture sounds anything but sexy: analyzing your investment and retirement accounts. But this is a project with Uri Levine as cofounder and chairman, after all.

The twist is that FeeX doesn’t just dig into where you’ve put your money; it teases out the hidden fees. And the results can be shocking. In America, fees associated with retirement funds come to around $600 billion a year.

“The majority of Americans are paying over a third of their retirement savings to fees alone,” FeeX cofounder and CEO Yoav Zurel tells ISRAEL21c. FeeX estimates that the average American household pays $155,000 in mostly hidden 401(k) fees over the lifetime of the account. The numbers are similar in Israel. 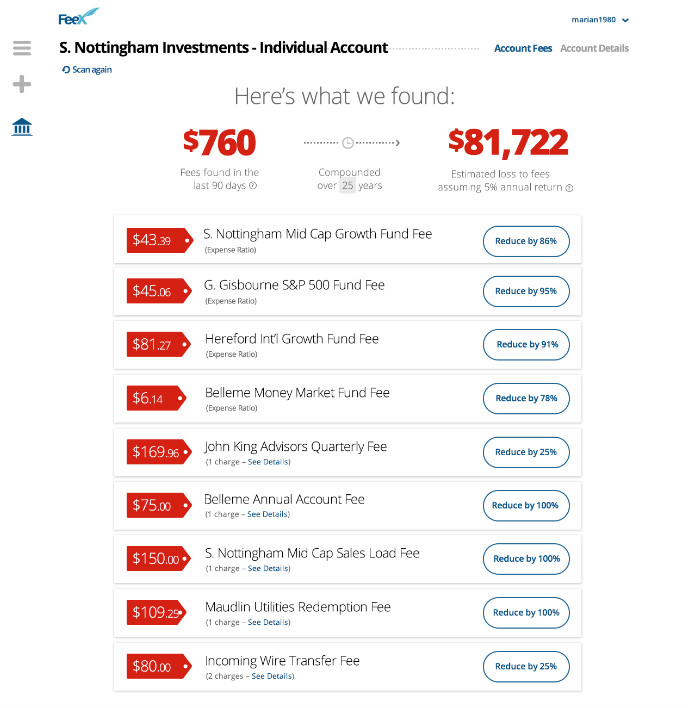 A FeeX report shows how much users may be overpaying.

Levine stumbled onto the idea for FeeX when he noticed a $250 annual charge on his bank bill earmarked for “guarding” his securities. Guarding is a remnant from the past when banks put the paper documents signifying your holdings in a guarded vault. Back then, there was infrastructure and electricity to be paid. But now everything is just bits in the cloud. Levine sent an email to his bank, which quickly refunded his money — long before Waze made him well-known high-tech figure.

Levine realized that this was just the tip of the hidden-fees iceberg. And if it was so easy for him to get his money back, maybe he could help other consumers do the same thing.

Levine didn’t dream up FeeX alone; post-Waze, he mentored a group of students at the Zell Entrepreneurship Program at the Interdisciplinary Center in Herzliya. Levine’s students Zurel and David Weisz, along with serial entrepreneur Eyal Halahmi, hatched the startup together.

Levine was so excited by what they’d created that, when the program ended, he invested $100,000 of his own money. That was two years ago. Since then, 75,000 people in Israel and the US have had their retirement funds analyzed by FeeX.

The system is surprisingly simple to use. In the US, simply give FeeX the login credentials for any accounts you want analyzed. FeeX feeds that information to Yodlee, a super-secure financial platform that powers nine out of the top 15 US banks. Within minutes, FeeX generates a report showing how much you have in each account, in what stocks or mutual funds your money is invested, and how much you’ll pay in the next 90 days and until your retirement in fees.

To the right of each line is a link reading, “Reduce fee by…” and then a certain percentage. Click it and a number of similar funds appear that have lower fees. Print out or generate a PDF of the report to send to your broker or – as is the case for most Americans managing their retirement accounts – make the changes yourself.

FeeX uses crowdsourcing to see what funds people are invested in and to cross-check data to make its recommendations smarter. One of the biggest chunks of usually hidden fees, explains Zurel, is what’s paid out to management and financial advisers. Based on what others are paying, FeeX can inform the user how much he or she may be overpaying. It’s up to the account owners to negotiate down fees with their banks and management advisers. FeeX generates a sample letter to get the ball rolling.

In Israel, it’s a bit more complicated. There’s no Yodlee in the Holy Land, so users have to download a copy of their account statements, then upload them to FeeX. Then the program can work its magic and make recommendations. Since Israelis hate to be freiers (a Hebrew pejorative for “sucker”), there’s a large graphic on the Hebrew site called the “Sucker Meter,” in case you were hesitant about writing to your bank.

Zurel says that FeeX has saved users in Israel and the United States more than $300 million to date. FeeX is free, in keeping with Levine’s past experience with Waze, where building a dedicated, enthusiastic user base came before advertising, paid premium services and eventually a huge acquisition deal.

So, has FeeX been successful in making retirement account fees sexy? The venture capital community thinks so. The company has raised close to $10 million. And its sights are set on more than just retirement accounts: Running the same analysis on mortgages has the potential to disrupt the lucrative business of advisers who help consumers refinance and lower their mortgage payments. It’s on the FeeX roadmap, as are credit-card statements and insurance policies.

FeeX likes to call itself the “Robin Hood of fees.” Says Zurel: “We’re constantly trying to bring transparency to the system, to change the equilibrium point between supply and demand. Now the demand knows more.”