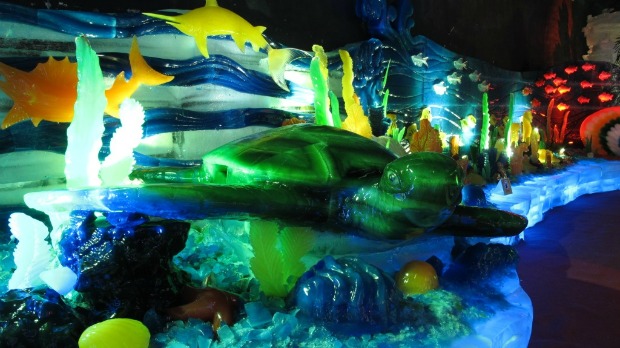 The sun may be shining, but one corner of Jerusalem will be chilled to minus-10 degrees Celcius for a festival on ice.

Following its successful debut last year, the Isracard-Jerusalem Ice City is coming to town again from February 20 to April 30 at the Old Jerusalem Train Station.

Underwater world in ice. Photo by Sharon Shalev
This year, it is expanding into three massive arenas – one to exhibit huge colorful ice sculptures themed “Far East,” “Ocean” and “Dinosaur’s World,” plus a performance arena and an ice-skating rink.

Performing for the first time in Israel, 22 Chinese acrobats and dancers will take to the ice each day in a series of shows. 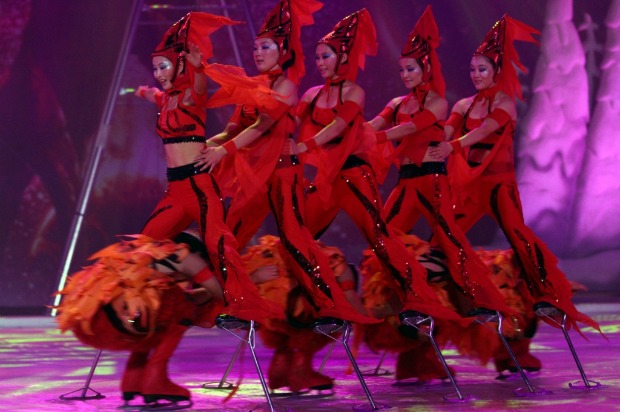 Chinese ice dancers in Jerusalem. Photo by Sharon Shalev
Visitors are welcome to don their mittens to interact with activities including an ice bus, ice slides, ice mazes, ice rainforests, ice snowstorms, ice bridges and more, all sculpted by a group of 60 Chinese artisans brought in especially for the show.

Sponsored by the Jerusalem municipality in cooperation with the Isracard Group and produced by Ariel Company, Ice City will transform the entire train area into a Far East fantasy land. Even such monuments as the Taj Mahal and the Great Wall of China will be rendered in frozen water.

And to top it off, visitors will end their tour at a sushi bar made entirely of ice (the sushi itself is for real).

UNCOVER ISRAEL - Get the ISRAEL21c
Weekly Edition free by email
Sign Up Now!
Bring Israel's story to life.
Millions of people around the world rely on us to gain a deeper understanding of Israel. We are the trusted source for original content you won't find anywhere else.
You can make a difference. Donate today to support journalism that brings Israel’s story alive.
SUPPORT ISRAEL21c
Read more on:   News, Jerusalem, Ice Festival, Nir Barkat, Sculptures