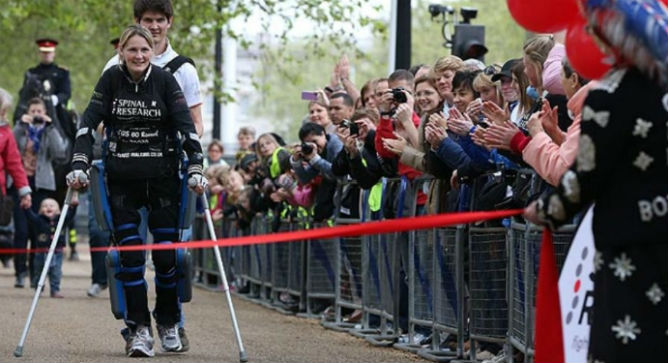 Claire Lomas couldn’t have completed the Virgin London Marathon without a lot of grit and determination – and an Israeli invention that allowed her to walk rather than being pushed in her wheelchair.

Lomas, a 32-year-old chiropractor, was permanently paralyzed below her chest as the result of a 2007 riding accident that ended her avocation as a four-star equestrian. Since then, she has gotten married, learned to ski and given birth to a daughter.

Always athletic, she wanted to participate in the 26.2-mile marathon even though she could cover no more than two miles a day. It took her 16 days to reach the finish line, accompanied by her husband, Dan Spicer.

And even that was possible only because of Argo Medical Technologies’ ReWalk, a futuristic Israeli exoskeleton invented by Dr. Amit Goffer.

ReWalk is the world’s first commercially available upright walking technology for people with lower-limb disabilities. The 44-pound device is comprised of a brace support suit that integrates motors at the joints; an array of sensors; a computer-based control system; and rechargeable batteries. Sophisticated algorithms analyze body movements, which then trigger and maintain gait patterns as well as stair climbing and shifting from sitting to standing. Crutches provide extra stability for walking.

ISRAEL21c broke the story about this innovation in July 2008. ReWalk has been featured in the media many times since, including a cameo appearance on the US television series Glee in December 2010.

A loaner from Israel

As reported in the British press and worldwide, Lomas had ordered a $69,000 exoskeleton with the help of a $16,000 donation from a charitable trust founded by a quadriplegic former rugby player. But it wasn’t going to be ready in time for the April 22 marathon, so Argo sent her one on loan from Israel in January.

“This was the first time our device was used for such a distance and within the framework of a marathon,” says Argo COO Oren Tamari. “For us it’s a validation of the design and the concept.” He tells ISRAEL21c that although the personal model of the ReWalk will only be launched in the fall, Lomas is among a handful of “early adopters” and will receive hers in July. She trained with the loaned model for a few months before the marathon, he adds.

Lomas is the first person in the UK to try a ReWalk, and she told reporters that it took awhile to get the hang of the mostly aluminum exoskeleton.

“It’s all about balance and trusting your feet even though I can’t feel them,” Lomas said. “Lean too far back and you fall over, too far forward and your arms are in agony from taking the weight.”

The last of 36,000 competitors to finish the marathon, Lomas reportedly raised $129,000 for Spinal Research, a British charity, through sponsorships.

Argo, founded in the northern Israeli town of Yokneam Illit in 2001, received the 2012 iF product design award for ReWalk. Its institutional model is now being used in clinical settings such as rehabilitation centers in the United States. It received FDA approval last year and the European CE Mark before that.

By allowing people confined to wheelchairs to walk and climb, the device may offer wide-ranging health benefits. The VA Rehabilitation Research and Development National Center of Excellence for the Medical Consequences of Spinal Cord Injury at the James J Peters VA Medical Center in the Bronx, New York, recently began a clinical trial to investigate if using the ReWalk three times a week for one or two hours will improve paraplegics’ blood pressure, cardiovascular system, bowel and bladder function, body composition, metabolism and quality of life.