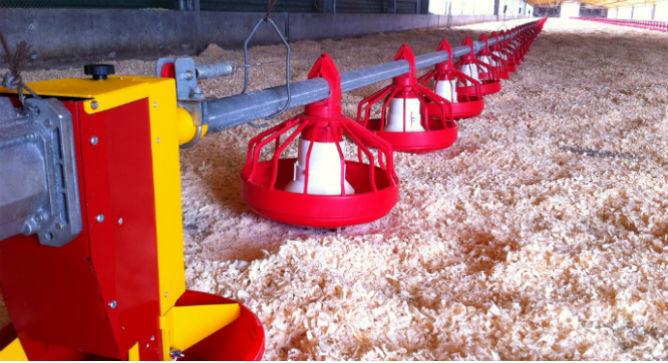 Chicken is the most widely eaten meat in the world. About a thousand chickens are slaughtered for consumption every second worldwide. In the West, the trend is obvious: From about 35 pounds per capita in 1970, poultry consumption in the United States leaped to 83.6 pounds per person in 2010, according to the National Chicken Council.

Yet poultry farmers still dish out feed using equipment that hasn’t fundamentally changed since the 1960s. An Israeli inventor is aiming to modernize the system for the sake of both the farmers and their animals.

“Contemporary feeding methods treat broilers — and other livestock such as pigs and turkeys — as products in a production line, with fixed feeding rates and minimal regard for their welfare,” Ziv Dubinsky tells ISRAEL21c.

Dubinsky, a mainly self-taught inventor from Kibbutz Beit Keshet in the Lower Galilee, has devised a robotic enhancement that could revolutionize chicken-house feeding systems.

“The idea is to improve the method of feeding poultry and other livestock with a robot that automatically adjusts the amount of feed at any given time,” he explains. “This saves farmers a lot of money, with far less wastage, while significantly improving the animals’ welfare by reducing mortality levels and rivalry within the flock.”

Dubinsky’s patented device needs no expertise to install onto standard animal-feeding equipment. “This is the beauty of the system,” he says. “The hardware itself is really quite straightforward.”

The secret is in the algorithms that regulate the system.

Although living on a kibbutz, Dubinsky is no farmer. “I had a previous patent — a digital weighing scale for the kitchen, developed for the Whirlpool KitchenAid brand. That’s how I was exposed to the world of entrepreneurs. I learned all the stages that a product has to pass — from conception to marketing, tweaking and adjusting as we go.

“Because I live on a kibbutz and spoke a lot with farmers, I learned that there are many efficiency problems in the poultry industry. Chickens are the biggest consumers of corn and wheat in the world, and food wastage and mortality rates are too high.”

“When I started researching the issue I soon realized that before around 1960 all poultry was raised free-range,” he explains. “The changes in the industry have been in the feed itself — the percentage of proteins and its makeup, rather than the equipment involved in feeding — and there has been little improvement in terms of animal welfare. From my previous experience, I knew that once you improve the conditions of workers in production lines, both the product and productivity improve.” 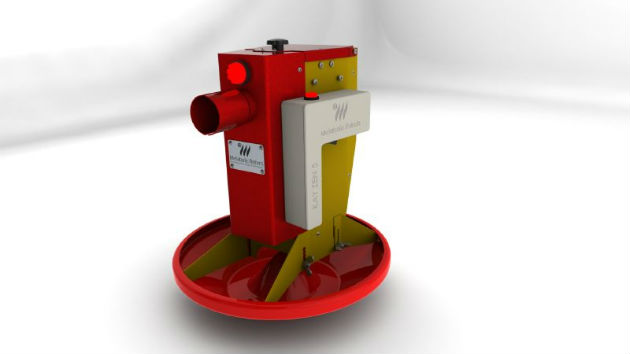 So far more than 800,000 chickens have been fed using Dubinsky’s system in about 20 farms.

Poultry welfare is an under-addressed issue in an industry where profitability is considered paramount, he adds.

“In 2009 I approached a number of farms in southern and northern Israel, who agreed to conduct a series of tests on a prototype unit that can set the rate of meals according to the chickens’ age and breed, within the 45-day growing cycle. During these experiments, for two years, I built a table for each breed’s performance versus the size of the food portions, which formed the basis of the algorithm.”

The experiments continue: So far more than 800,000 chickens have been fed using Dubinsky’s system in about 20 farms. “All the chickens have registered better results than those fed using the conventional method — with up to 45 percent fewer dying. In Israel, an average four to seven percent die in each intake. We have achieved a mortality rate between 1% and 4%. This is a most startling result.”

“We’ve also seen a sharp decline in the amount of food entering the coop during each intake. The food is imported in most countries in the world, with the United States and Russia the biggest producers. The price of corn is steadily rising, due to global warming, and this is ultimately passed on to the consumer. To produce a kilogram of chicken meat you need up to half a kilogram of grain.”

The farmers’ feedback has been most encouraging, he says.

“At the end of the growing cycle the chickens weigh more and their percentage of fat and disease are significantly lower. Their metabolism in the last two thirds of the growing cycle is more efficient. I found that they prefer to eat smaller portions at greater rate than large meals at a slower rate.”

Dubinsky recently established a startup called Metabolic Robots to develop and market what may become a breakthrough innovation. He rents an office in a picturesque stone building erected in 1911 by the first Jewish settlers in nearby Kfar Tavor.

“There’s something romantic about developing something new in such ancient surroundings,” he says.

Looking ahead, he sees other applications for his development. “In the future, the algorithm can be modified to help feed people in disaster areas or overpopulated cities, because it allows constant feeding amounts, without any wastage.”

Metabolic Robots is now looking for an investor who can help Dubinksy leverage the company into the mass-production stage.

UNCOVER ISRAEL - Get the ISRAEL21c
Weekly Edition free by email
Sign Up Now!
Bring Israel's story to life.
Millions of people around the world rely on us to gain a deeper understanding of Israel. We are the trusted source for original content you won't find anywhere else.
You can make a difference. Donate today to support journalism that brings Israel’s story alive.
SUPPORT ISRAEL21c
Read more on:   Green Science, Agriculture, Environment, Robotics