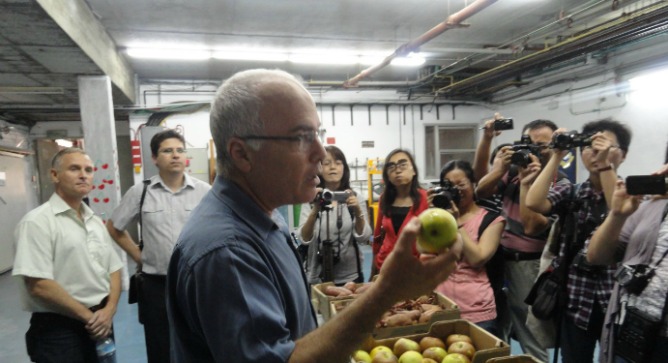 Amnon Lichter, head of the Department of Postharvest Science of Fresh Produce, talking to visiting reporters.

Sometimes it is the simple inventions like the zipper or bread slicer that can change everyday life for the better.

The same is true in agriculture. Just covering crops with different colored nets, for example, can actually affect plant physiology and enhance yield.

Whether low-tech or high-tech, this and countless other innovations from the government-funded Volcani Agricultural Research Organization in Israel have earned a worldwide reputation for expertise in plant sciences, plant protection, environmental sciences and herd management.

Farmers can drop by Volcani’s main campus at Beit Dagan to get any help they may need, whether it’s an irrigation issue or a way to banish white flies from tomato vines without using pesticides. Much of what is learned, developed and implemented in Israel then gets planted in fields around the planet.

“We provide a tight collaboration between the farmer, researchers and extension services who liaise with the farmers,” explains Ada Rafaeli, Volcani’s associate director for international cooperation and academic affairs, during a recent tour of the center’s six institutes on what looks like a large farm with greenhouses and test plots scattered everywhere.

“Sometimes the farmer is also the researcher,” she says, pointing out that Israel probably has the world’s most educated farmers, with a high percentage of them holding an undergraduate degree.

Including its research centers in Neve Yaar in the north and Gilat in the Negev, the Volcani ARO employs 185 scientists and 400 engineering and technical assistants, as well as 220 graduate students. Some 40 visitors from abroad also come to the center every year to learn about and import Israeli expertise back to China, Africa or Latin America, Rafaeli explains.

While its approaches based on genetic or mechanical engineering are sometimes hard to commercialize, the center finds ways to grow businesses and license Israel’s fertile know-how.

Rafaeli gave ISRAEL21c a peek at some of the activity going on in Beit Dagan:

The ARO has an active program that turns desert into forests, thereby reversing desertification and reducing radiation-emitting greenhouse gases.

The organization has made huge advances in growing tomatoes in hot climates by breeding techniques that make tomato pollen tolerant to Middle East heat stress.

Volcani scientists are working on producing varieties of chickpeas with more protein per bean, sure to be popular as hummus is now a super-food sensation in the United States.

Using a closed-loop system, Volcani researchers have pioneered aquaculture systems that provide fish for food, and wastewater for crops that can feed livestock.

Precision agriculture is another strength of the ARO. A blanket solution does not fit every field, says Rafaeli.

The organization will send out researchers to assess a field and determine where best to apply water, nutrients and pesticides — thus saving precious resources and reducing the environmental impact of conventional farming.

The center also specializes in creating new wheat varieties. While Israel isn’t big enough to be a major grain provider, its technology can be exported to breadbasket regions such as those in the United States. 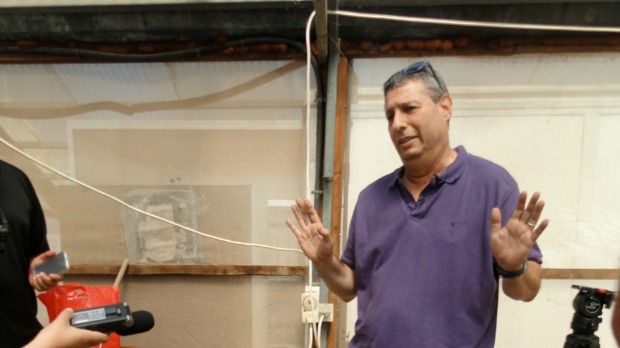 “We are also providing the world with new varieties for animal feed,” Rafaeli says.

Inside the center’s underground Gene Bank, hundreds of thousands of indigenous seeds are stored for current and future research. Some of Israel’s ancient grains may provide the key for food of the future.

If you come during citrus season, says Rafaeli, you can taste all the special varieties the Volcani Center is working on. One of its most cherished commercial successes is the “Or” tangerine, which peels easily, has no pits and tastes like Israeli sunshine.

On our tour, ISRAEL21c met Moshe Lapidot working on new cultivars of tomato plants that have a genetic resistance to tomato yellow leaf curl virus; and Joshuah Miron, who works on finding “recycled” food substitutes for grain-fed cows in a region where grain is prohibitively expensive for a dairy farm. Amnon Lichter showed how the loss of agricultural produce after harvest can be minimized through using essential oils and oxygen-starving techniques.

The Volcani’s Samuel Gan-Mor has recently revolutionized the way bugs are kept off crops, using a cooking-oil compound that gets sprayed on the leaves.

Because of the work of the Volcani scientists, Israel is able to collect more milk per cow, and to raise healthier, tastier produce that grows over extended seasons and has a long shelf life. It has for many years worked with the Foreign Ministry’s MASHAV international development agency, and its Center for International Agricultural Development Cooperation, to export all these innovations to farmers on several continents.

UNCOVER ISRAEL - Get the ISRAEL21c
Weekly Edition free by email
Sign Up Now!
Bring Israel's story to life.
Millions of people around the world rely on us to gain a deeper understanding of Israel. We are the trusted source for original content you won't find anywhere else.
You can make a difference. Donate today to support journalism that brings Israel’s story alive.
SUPPORT ISRAEL21c
Read more on:   Environment, Volcani Agricultural Research Organization, Agritech