This interactive, innovative museum puts the visitor in the Olympic stadium.

“It’s very exciting,” Steven Skulnick, a British tourist, tells ISRAEL21c. “I feel more of a connection to the Olympics.”

The museum is sectioned into five parts to correspond with the five interlocking Olympic rings. Visitors take a guided, one-hour tour that includes a bit of historical background, the Israeli experience and highlights of sporting achievements.

“This is pure edutainment,” says manager Haim Rogatka. “When you see the Israeli flag and the crowd singing to judoka Arik Ze’evi at the Athens Games it is really emotive. People come out of the museum with pride in their eyes.”

“Visitors to this museum take home with them our belief in ‘we can,’” says Rogatka. “We’re not a medal nation. We can’t compete with America or China when it comes to medals. But look at Andy Ram and Jonathan Erlich in London recently. They ousted the top tennis player Roger Federer in their first match. Israelis are not afraid; we like challenges.”

The Israeli Ring is the highlight of the tour’s five stops. 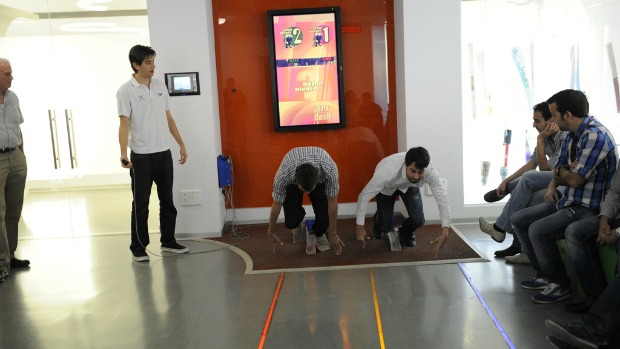 You can test your own athletic skills at the museum. Photo by Reuven Swartz

“When you hear the medalists speak you feel the Israeli spirit,” says Rogatka. “Even if life in Israel can be tough, we have unlimited energy.”

Indeed, when Ze’evi talks about his third-place finish in Athens, visitors often report feeling goose-bumps when they see the fans in the stands break out into the “Hatikvah” national anthem.

“People get really emotional at the exhibit, especially when they hear about the Israeli achievements,” says guide Danielle Yarom.

No Israeli Olympic experience is complete without touching on the 1972 Munich massacre. The museum presents a poignant interview with Esther Roth-Shachamorov, winner of the Israeli athletic award, memorializing the tragedy and declaring that “We shall continue to participate. Nothing will stop us.”

“They dealt with the Munich tragedy really well, especially for young people,” says Olivia Morris, 21, a tourist from Leeds.

Visitors start in the Winners Ring, where they watch a 360-degree video of the most exciting moments in the history of the Olympic Games. There’s American diver Greg Louganis, who despite suffering a concussion, went on to win a gold medal; Ethiopian marathon star Abebe Bikila, who ran barefoot to a gold medal; and Romanian gymnast Nadia Comaneci achieving her perfect score.

The Ring of History brings visitors all the way back to ancient Greece, where the Olympic Games started. Visitors are then jetted digitally to Paris to a declaration by Baron Pierre de Coubertin, founder of the International Olympic Committee, that the Olympics should be revised for modern times.

The fourth room is the International Ring, where visitors watch the world’s best athletes on an enormous globe.

Another highlight, especially for kids, is the Ring of Experience. Visitors try to outdo one another on sprinting blocks, with mind games, and in endurance.

“The museum is a modern way of engaging young people in sports. It’s modern and interactive and a really good presentation,” says Joel Marks, a tourist from London.

Throughout the exhibit it’s obvious that the best technology was used. Yet after the museum opened in September 2009, it stayed relatively obscure.

With the London Olympics came a hike in interest. Since the beginning of the year the museum has seen a 140 percent jump in visitors. In July alone, more than 8,500 people came through the doors – an impressive number considering visitors must tour in a prearranged group and the maximum number of participants per tour is 30. 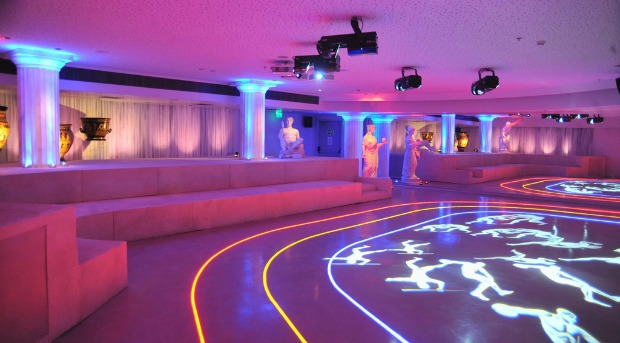 One room of the exhibition takes you back in time to ancient Greece. Photo by Reuven Swartz

The tour, which is offered in English and Hebrew, is recommended by the Israeli Ministry of Education and is one of the school system’s sanctioned day trips.

Rogatka, who in the past managed Mini Israel and King City in Eilat, says the museum is now working on a project to send that motto beyond the Olympic Experience’s doors.

“We want to show people how to turn a dream into success,” he sums up. “We can’t just talk about a better society. We have to do something to make it happen. We’re trying to develop the value of the Olympic Experience into life in general.”