Nine months after the devastating earthquake in Haiti, Israeli aid workers continue to offer vital aid and assistance to help the country back on its feet. 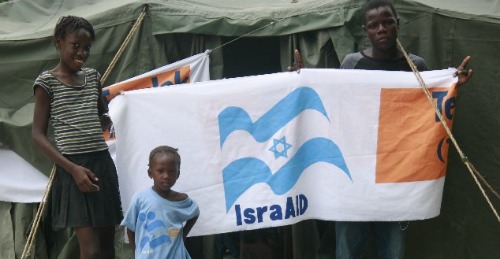 When Israeli trauma expert Dr. Ruvie Rogel first arrived in Haiti in the wake of January’s devastating 7.0 magnitude earthquake he was leading a workshop on emotional resilience techniques for community leaders in the country’s worst slum, the Cite De Soleil, when an aftershock hit.

Panic ensued as everyone rushed frantically to get out of the building. With no evacuation procedures in place, Rogel – deputy director of Israel’s Community Stress Prevention Center (CSPC) – immediately realized that the fast, efficient evacuation drills used in northern Israel during katyusha attacks could help the Haitians prepare.

“On the spot, we found ourselves improvising and saw how much of the Israeli experience is relevant and how much we have to give,” he tells ISRAEL21c.

Over nine months on, Israel’s long experience dealing with trauma and resilience, is still being put to good use in Haiti. The headlines may have stopped, but Israeli NGOs, government bodies, specialists in education, medicine and health, have remained behind in an effort to help the Haitians rebuild their island-country.

Even in the midst of the deadly new cholera outbreak, which has already taken the lives of 300 people in Haiti, a team of specialists from Israel flew out to the country last week, to assess the work being carried out by Israeli aid agencies in the field and to help prepare Israeli staff to meet the cholera outbreak, which now threatens the capital city of Haiti, Port-au-Prince.

Haiti was already known as one of the poorest nations in the world before the January 12 earthquake hit. MASHAV, Israel’s Agency for International Development Cooperation, had already been working on development projects with the Haitians for five years before the disaster.

The earthquake, which laid waste to Port-au-Prince, left over 230,000 people dead, another 300,000 injured, and over one million left homeless.

With an alacrity that gained the country worldwide praise and recognition, Israel sent over a force of Israel Defense Forces (IDF) volunteers within four days of the disaster, and set up an extremely advanced and well-equipped field hospital, saving hundreds of lives. Clean water is a national priority especially in the wake of the new cholera outbreak hitting Haiti.

In the days that followed, hundreds more Israeli volunteers from the IDF, Magan David Adom (Israel’s Red Cross), ZAKA (the Israeli search and recue organization) and IsraAID, a 17 member coalition of Israeli and Jewish aid and rescue organizations, flew out to Haiti to offer medical aid, and take part in search and rescue missions, pulling dozens of people out of the rubble.

As the weeks went by Israeli NGO IsraAID, founded by Shachar Zehavi in 2001, sent two missions to Haiti, made up of military and civilian search and rescue and medical teams and humanitarian aid workers, who remained in the country for six weeks.

After this initial response, IsraAID continued to send out missions to Haiti, mixing and matching the expertise of many of its member organizations to try to find creative solutions to the country’s ongoing problems.

IsraAID members offer everything from search and rescue, to post-psychotrauma care, development and relief work, rebuilding of communities and schools, aid packages, and medical assistance.

A few weeks after the quake, IsraAID member Tevel b’Tzedek (The Earth – In Justice), sent its first delegation to Haiti to set up schools and ‘community tents’ in some of the larger camps.

Today, the organization, founded by rabbi and writer Micha Odenheimer, continues to operate and develop programs ranging from a kindergarten to courses in pottery, hygiene, first aid and sport, and groups for adult education, community action, and empowerment for the vulnerable female teenage population.

With help from US organizations, Tevel b’Tzedek volunteers are teaching the Haitians how to triple their food production in rural areas and how to improve both local and international marketing. A new program, in collaboration with the Toronto Jewish Federation, will bring Canadian family doctors to Haiti to provide family medicine on a daily basis as well as education in family health and general hygiene. Funds have been raised to support the program for its first year.

Also in Haiti under the auspices of IsraAID is the Jerusalem-based Israel Center for the Treatment of Psychotrauma (ICTP). Founded in 1989 by Prof. Danny Brom, in addition to its work in Israel, ICTP collaborates with specialists around the world to share its unique expertise. 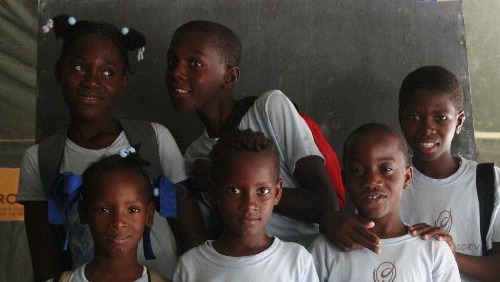 Kids at a makeshift school set up by an Israeli aid organization.

ICTP representatives flew to Haiti in February with an IsraAid delegation and since then have been laying the groundwork for their resilience-building intervention. Senior ICTP trauma psychologist Dr. Naomi Baum will be flying to Haiti this fall to develop a lead team with members from seven partner organizations involved in education and mental health in Haiti and train them in ICTP’s Building Resilience Intervention (BRI).

“This interactive workshop model focuses on adult professionals, to help them develop personal coping and resilience skills that they can adapt and apply in their professional lives – which may be in a classroom or other work environment. In this case the BRI will be adapted to the language (Creole) and culture of Haiti, for use by teachers in their classrooms,” Baum tells ISRAEL21c.

She adds that she will be holding meetings with potential funding agencies in Haiti and traveling to the rural areas to support Tevel b’Tzedek volunteers in their work.

Elsewhere in Haiti, the Negev Institute for Strategies of Peace and Development, is providing training in microfinancing and helping to re-establish small business enterprises, while Alyn Hospital, a rehabilitation center for physically disabled children based in Jerusalem, has sent rehabilitation teams of occupational and physical therapists to Haiti.

The Alyn team worked in Haiti for five months following the disaster, and Alyn therapists will be flying back in January for a follow-up.

MASHAV also continues its long-term work in Haiti. Ambassador Haim Divon, head of MASHAV, tells ISRAEL21c that the organization is helping to oversee and establish a badly-needed ICU/trauma unit in the hospital in Port-au-Prince.

This aid includes equipment, on-site training and ongoing supervision. In addition, MASHAV plans to fund and implement a long-term agricultural project in collaboration with Haiti’s Ministry of Agriculture.

Rogel, from CSPC, has been out to Haiti twice since the earthquake. His organization, set up by Prof. Mooli Lahad in Kiryat Shmona, a northern town once battered by constant katyusha rocket attacks, works with the Israel Trauma Coalition (ITC), an organization that unites leading NGOs and government organizations specializing in psychotrauma services.

In September, the non-profit Save a Child’s Heart, located in Wolfson Medical Center in Holon, brought three Haitian children to Israel for life-saving heart surgery. Earlier this year, it brought over six-year-old Woodley Elsyee, for heart surgery. He is now healthy and well and flew back to Haiti in April.

The latest team to fly out to Haiti from Israel will be stopping for a week in the country to discuss the impact of the cholera epidemic on aid programs, and to assess Israel’s relief work.

The team will then fly on to the Jewish General Assembly in New Orleans, taking one of the IDF tents used as a hospital in the immediate aftermath of the earthquake, and later turned into a school, a community center, and a women’s empowerment center.

The tent, which has now been replaced by caravans, and more permanent structures, will shelter some of the very tables and chairs that were used in the first makeshift schools, some 10 months ago. They will also house video and photography exhibits by Israelis who documented the efforts to re-build and rehabilitate following the disaster.

“We want it to be a really ‘grassroots’ exhibit, we’re hoping to give them a real sense of it, a feeling that they’re seeing what really happened on site and what was done,” IsraAid founder Zahavi tells ISRAEL21c.

“It’s really important to show people the willingness of Israelis to be at the forefront of disaster relief, to show people that as Israelis it’s important for us to be there at any disaster around the world to share our experience and knowledge, and also to show the compassion and the heart of the North American Jewish communities,” he concludes.