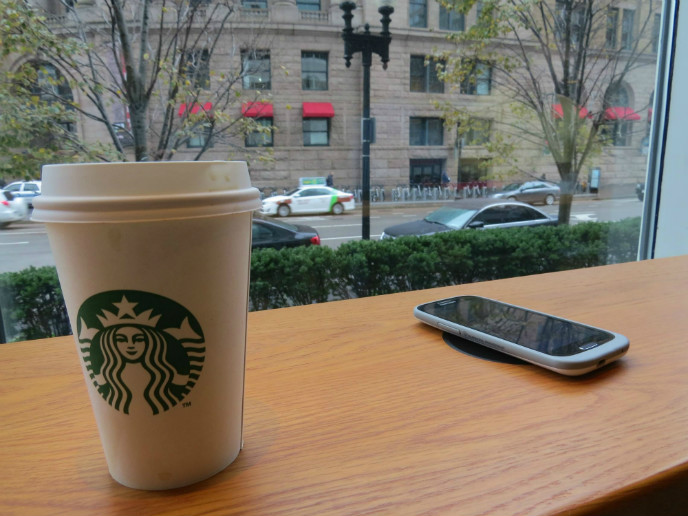 Recharge yourself and your device.

You know that feeling when your smartphone flashes “connect charger” at you but all the outlets in the café are being used? Well, thanks to Israel’s Powermat technology, Americans are already enjoying the convenience of recharging their mobile devices by simply laying them on a table.

Powermat Technologies  is running pilot programs with airports, cafés and fast-food joints in the US to make “dead battery anxiety” a thing of the past.

Starbucks recently unveiled Powermat wireless charging in some 200 of its stores in the San Francisco Bay Area. The company says that the November 19 launch is the first step in Starbucks’ strategic plan to offer Powermat throughout its US locations, and to explore rollouts in Europe and Asia within the year.

“We are thrilled to offer our Bay Area customers the next level of convenience with Powermat wireless charging. This first market installation is a first step towards a national deployment of this amenity in our stores,” said Adam Brotman, chief digital officer at Starbucks.

“We were pleased with the customer response to the pilot tests we conducted over the past two years and we now expect an even greater level of customer satisfaction as we set forth to offer wireless charging capability on a national scale.”

Powermat and Starbucks published a cute video ad to go with the new rollout.

Starbucks and Coffee Bean cafés are equipped with Powermat Spots — designated areas that look like drink coasters stuck on tables and counters where customers can place their compatible device and charge wirelessly.

According to the Powermat website, you can also power up at Starbucks branches in Boston and San Jose, the Delta Sky Club Terminal 2 at JFK Airport and at the McDonald’s at 160 Broadway in New York City.

Starbucks’ three-year plan is to install more than 100,000 Powermat table chargers in its 7,500 US stores. And that means coffee fans will be able to recharge themselves as well as juice up their mobile devices.

“This endeavor is a critical step in Duracell’s vision to make dead battery anxiety a thing of the past,” said Stassi Anastassov, president of Duracell at Procter & Gamble.

All smartphones and tablets are compatible with the charging pads. Some smartphones, however, need a Ring accessory that plugs into the Powermat port (free for now at the branches running the pilot project).

Speaking to ISRAEL21c earlier this year, Powermat CEO Ran Poliakine said that “within a few short years, there will no longer be plugs, outlets and wires. You’ll simply place your electronic devices on a table, and it will receive electricity from an embedded surface.”

From the reactions to the pilot programs so far, it doesn’t look like we’ll have to wait even that long for wireless Powermat chargers to become ubiquitous in cafés the world over.