Thanks to an Israeli startup called PointGrab, life has just gotten exponentially easier. Now, you don’t have to press the buttons on your remote control to channel surf; nor do you have to get up to switch songs on the computer across the room. Your bare hands can do the trick.

This is made possible by PointGrab’s advanced gesture recognition software, on the market since 2010, which offers an intuitive way of interacting with consumer devices. Through finger, hand and two-hand movements, the software (available on Android, iOS, Linux, OS X and Windows) communicates with the standard camera of PCs, tablets, smartphones and TVs for a whole new user experience.

Its Hybrid Action Recognition technology – which won the Frost & Sullivan 2013 European Technology Innovation Award – was introduced last July and can accurately and reliably anticipate, detect and analyze shapes and movements up to 17 feet away.

Fujitsu, Acer and Lenovo were the first computer companies to integrate the software into their hardware. Samsung began to do the same with its smart TVs in 2012. In 2013, PointGrab introduced an advanced version snapped up by Samsung and then Chinese electronics manufacturers TLC and Skyworth. So far, more than 20 million devices are equipped with hand gesture capability powered by PointGrab. 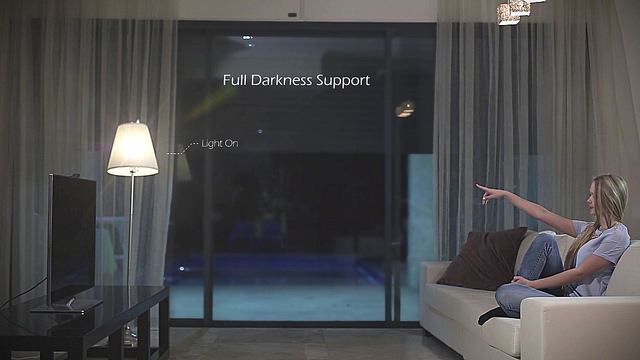 “The beauty of a software solution is that you don’t have to change the hardware in an existing device,” Director of Marketing Avital Rabani tells ISRAEL21c in the company’s offices in Hod HaSharon. “That’s why many manufacturers prefer it.”

CamMe for the selfie craze

PointGrab does not sell directly to consumers, but rather with to equipment manufacturers.

While demonstrating the technology on her iPad and TV, Rabani points to the company’s SDK (software development kit) for developers to create applications using gesture control.

To introduce this SDK, PointGrab has developed CamMe – a gesture-based camera enabling users to photograph themselves without having to hold their phones or iPads at arm’s length. They simply gesture at the device from a distance.

“With the selfie craze, this app has been a huge hit,” she says. “Less than six months after loading it to the app store, there were nearly one million downloads.” 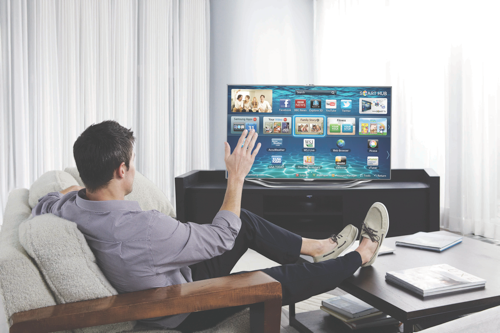 And, she adds, PointGrab “has been working hard to keep consumer costs down. We feel this experience should be available for the masses, not just the high-end market.”

PointGrab is now launching AirTouch for consumer electronic devices, allowing you to control your devices from a distance by simulating a “touch” gesture in the air; and PointSwitch to adjust home lighting, air conditioning, electric shades and appliances.

It understands what you want to do

Imagine gesturing “open” at your refrigerator and watching the doors part as if by magic. Picture entering a dark room and signaling the light to go on with the point of your finger.

ISRAEL21c was given a demonstration of PointSwitch, which “understands” the intent of the user by measuring the eye-finger trajectory aiming to turn a light on or off.

“Otherwise, it would go on and off whenever anyone in the room accidentally gestured in its direction,” explains Rabani. This makes it different from the mechanism in motion-sensor lights, which respond to any movement in their path.

PointGrab was founded in 2008 by Haim Perski and Amir Kaplan, both of whom had years of experience at N-trig, an Israeli company that developed integrated pen and touch technology for smartphone, tablet and Ultrabook devices. Privately owned since the beginning, PointGrab is now a profitable endeavor with a staff of 60 full-time employees, about 50 of whom are located in Israel – the R&D base of the operation — while the remaining 10 work worldwide in sales and business development.

One challenge it currently faces is making consumers aware not only that the gesture-control technology exists, but that it is already available in many devices. 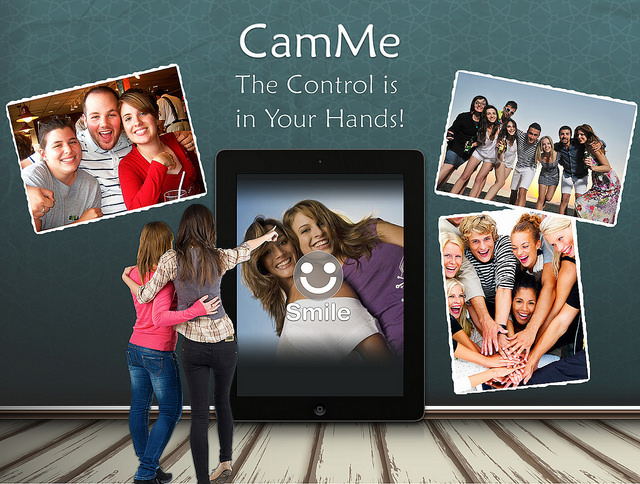 CamMe: a better way to shoot a selfie.

For example, recounts Rabani, “We went into a Best Buy in the United States and discovered that a salesman didn’t even realize that the TV he was pushing contained it. We showed him how it works, and he was amazed, saying, ‘Now I know how to sell this TV!’”

As a result, PointGrab held a large training session in Israel for Samsung salespeople so that consumers have a better chance of becoming familiar with the option.

Perhaps its next invention will need to be a virtual treadmill.