Exciting fact about Israel’s land use, as the world experiences massive deforestation: Israel is the only country in the world to have a net gain of trees in the last 100 years.

This is thanks to a non-profit and visionary non-governmental organization, the Jewish National Fund (JNF) –– or Keren Kayemeth LeIsrael –– set up in 1901 in Israel to develop the land.

Under Ottoman rule at the time, Israel was neglected and considered a backwater state infested with malaria. There was a genuine need for a long-term plan to turn things around.

Using donations from generations of Jews in the Diaspora, some 240 million trees have been planted in Israel by JNF over the last 11 decades, including a few by the Kennedys.

But its focus is no longer just on greening the desert. The JNF has helped build some 180 dams and water reservoirs and has established about 1,000 parks, some of which feature hiking trails around water. Some of its flagship rehabilitation projects include cleaning up the polluted Alexander River.

At the recent water technology conference in Tel Aviv, WATEC, the JNF showcased its expertise and exportable knowledge in water for countries experiencing similar conditions as Israel.

By dealing with desertification and water scarcity for the past few decades, the JNF has acquired ample experience knowing where the rain flows, which trees can withstand water stress, and how to make non-arable land better suited for people and agriculture.

Elisha Mizrahi, regional director of the JNF in Israel, tells ISRAEL21c that WATEC allowed him “to show what the JNF can do in order to enlarge the availability of water to people in the peripheries — farmers or the people in the municipalities,” he says.

Land reclamation for cities, parks and landscaping is one key strategy. 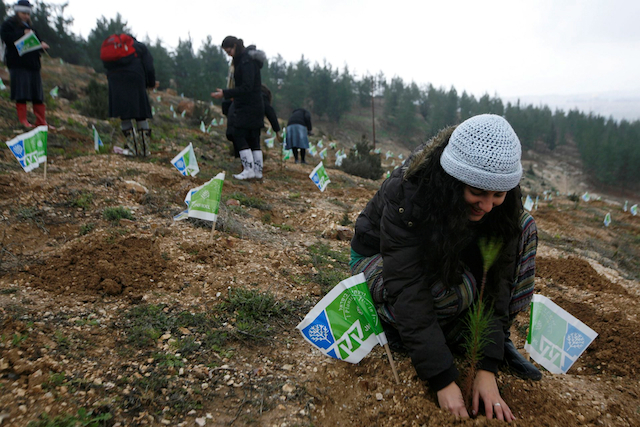 Youngsters planting trees at Tubishvat, courtesy of the JNF. Photo by Flash90

The organization’s biggest achievements in water include the reclamation of the Hula Valley, Mizrahi explains.

The swampy land in northern Israel was once drained to rid Israel of malaria-carrying mosquitos. Recently, ecologists helped persuade authorities to re-flood the swamp, as it offers a special ecosystem for wildlife as well as a twice-yearly refuge for millions of migratory birds.

“In partnership with the farmers, we re-flooded the Hula Valley. The JNF took on the burden of carrying the financing of the project,” says Mizrahi.

Even animals thought to be extinct, such as the Hula painted frog, have emerged once again, making Israel’s environmental Hula project a model of success for countries and regions with similar aspirations.

The JNF has also been instrumental in adding a layer of natural water runoff to city ecosystems. Call it dialysis for a city’s aquifers.

The Israeli city of Kfar Saba, for instance, is now home to a holistic pilot project based on a water bio-filter where “wintertime water that runs through the city was channeled to the sea,” say Mizrahi. Now that water is being collected, treated and filtered, with some of it going back to the aquifer and some toward local landscaping.

A water bridge between nations

While Israel’s experience is yet to be applied to neighboring countries with which it has no diplomatic relations –– consider Iraq and its devastated marshlands –– “people are coming from every end of the planet to see what can be done in wide open areas with water reclamation, says Mizrahi. “We have experience and they want our aid and experience.”

“We are speaking with Africa to help reclaim desert. It’s true that we are exporting our knowledge without any fee. It is important to show other countries that this can be done. We are creating bridges,” says Mizrahi.

It’s hard to pin down just one approach or specific technology that Israel uses for water and land reclamation, he says. There are multiple successful approaches.

Among its areas of expertise are how to prepare the land, how to capture and utilize water runoff, and which species to introduce in each area to create a forest, he says.

Read more about the JNF at http://www.jnf.org/.