Meet the superheroes of the insect world: “pirate bugs” that feast on thrips, aphids and other tiny pests that destroy and infect food crops.

Single-mindedly devoted to their mission, these beneficial predators have allowed Israeli farmers in the Arava region of the Negev Desert – where 60 percent of Israel’s fresh vegetable exports originate – to cut their use of chemical pesticides by about 80%.

Nearly every one of the 120 farmers in the Arava’s Moshav Ein-Yahav, one of the largest farming villages in Israel, uses this form of biological pest control, a.k.a. integrated pest management (IPM). Ein-Yahav collectively produces about 34,000 tons of peppers, watermelons, melons, tomatoes and other vegetables in protected greenhouses, net houses and tunnels. Half are exported.

“We usually use natural enemies to eat insects that cause damage, and if we do spray it’s only on a small scale for the one or two plants with high infestation,” says Rami Sadeh, a farmer and staff agronomist at Yofi Shel Yerakot (Beauty of Vegetables), the company that markets most of Ein-Yahav’s produce along with citrus fruit, lettuce, cabbage, carrots and potatoes grown elsewhere in Israel.

“It costs us more money per dunam, but we can sleep well knowing we are not using chemicals,” the father of four tells ISRAEL21c.

Sadeh began planting his melons, peppers and eggplants four years ago using this method of pest control, which was pioneered in Israel in the 1980s at Bio-Bee Biological Systems at Kibbutz Sde Eliyahu. Today, a similar company at Kibbutz Yad Mordechai also raises and sells predatory insects for agriculture. The Orius gobbles up thrips in pepper plant flowers. Photo by Dani Lev

“It took farmers time to see that this technique works and they can rely on it,” says Sadeh, a former chemical company employee. “I started using it immediately because I knew it works. For me and for my children it’s safer, and of course for the consumer.”

His description of how the pirate bugs do their job is almost gruesome, but this is nature at its best.

Take, for example, the parasitic wasp whose one mission in life is killing aphids, the much-hated “plant lice” that destructively suck the sap from crops. 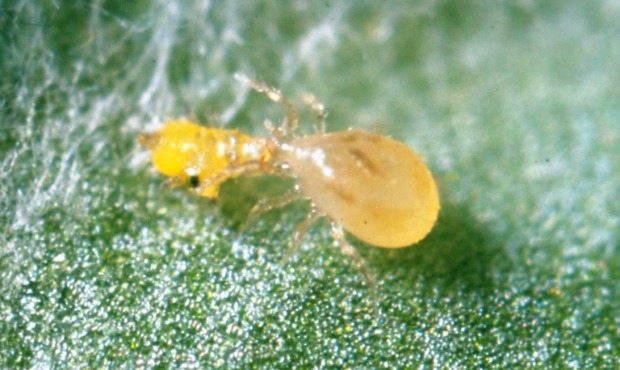 This predatory mite is an effective form of pest control. Photo by Dani Lev

Beauty of Vegetables member farmers also use three other predators — the Orius laevigatus that vanquishes thrips, and the swirskii and persimilis mites that eat up other harmful bugs. (Swirskii is named for the Israeli researcher who discovered it 20 years ago).

“Usually in the Arava our biggest crop is peppers, mostly for export,” Sadeh says. Thrips, the main scourge of the pepper crop, get into the plants’ flowers and harm the developing fruit, and they also spread plant viruses. Until the predatory wasps were available to farmers, they had to resort to toxic pesticides to keep the aphids from destroying the peppers.

Packaged like salt or pepper, the helpful bugs get sprinkled “like you’d salt your sandwich” on the vegetable plant leaves. None of these insects harms the host plant.

Clearing the soil of germs

Ein-Yavav farmers grow nothing in open fields and also use several other methods to keep their produce as free as possible of bugs and bacteria, Sadeh adds. 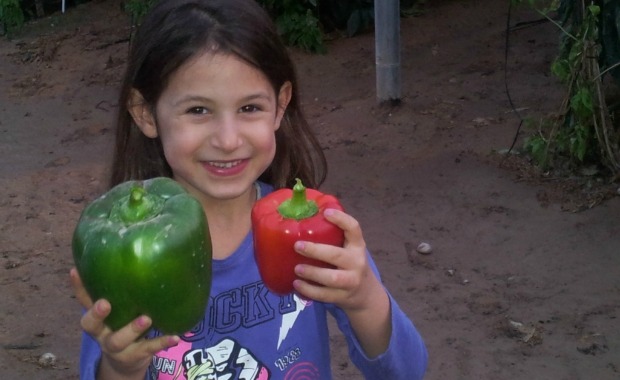 To make sure that no bug or no pesticide residues hitch a ride on the vegetables to market, the picked produce gets a thorough bath, and representative samples are checked using sophisticated lab equipment.

“We have a lot of unique things here,” says Sadeh, whose name aptly means “field.”

“For example, we have one month during summer when it is not allowed to grow anything in your plot, in order to make a vacuum – if there are no plants, the insects die off. Then, when you plant in August, you start the season without insects and without any need to spray.”

This annual rest period also protects against soil disease. “We cover the soil with plastic during this time, and the sun’s heat takes the temperature up to 50 to 60 degrees [Celsius] and it kills any fungus that causes diseases,” says Sadeh. “This is done almost only in the Arava.”