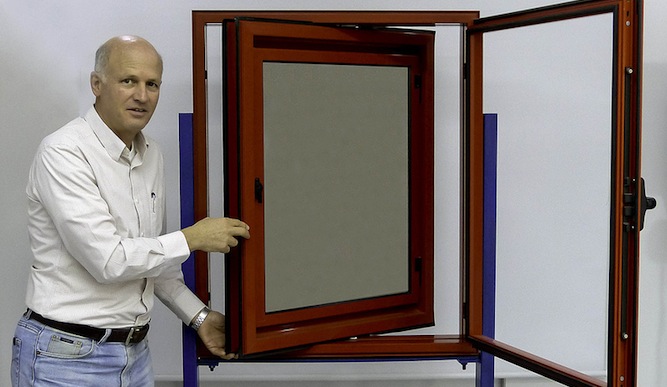 Prof. Erell with a prototype of the Seasons Window.

“We spend most of our lives in a controlled environment,” says Evyatar Erell, associate professor of desert architecture and urban planning at Ben-Gurion University’s Jacob Blaustein Institutes for Desert Research. “We live and work under conditions that are different from those outside. When it’s hot, we turn on our air-conditioners; when it’s cold, we use our heaters. We want to be as comfortable as possible at all times.”

The question is how to achieve this comfort, both indoors and out, while maximizing efficiency and conserving energy.

That depends on the location. “The difference between the climatic conditions in Israel for which the architect has to find solutions and those in New York, Paris or London is often significant,” he explains. “So, too, do the conditions within Israel differ from place to place – such as in Tel Aviv, Eilat or Jerusalem, which need to be addressed differently from an architectural standpoint.”

Erell’s department at the Blaustein Institutes focuses on this very issue: how climate – particularly in desert regions — is reflected in buildings and in the space between those buildings.

In his office on the Sde Boker campus, Erell tells ISRAEL21c, “Unlike other scientific or academic disciplines, architecture doesn’t create innovations that win Nobel prizes; it provides solutions for problems that arise in different environments.”

Erell, a leading researcher and expert in advanced glazing systems, as well as in microclimates and urban planning, bemoans the misplacement and often-inappropriate size of windows in Israeli apartments, houses and office buildings.

“In England, for example, there is a lack of light, so buildings are designed with large windows to maximize illumination in a room,” he says. “In Israel, the problem is not that we don’t have enough light, but too much. Yet many Israeli buildings look as though they were designed for Europe, with huge and multiple windows, or they over-compensate with windows that are too small.”

We do not tend to notice the effect this has on our behavior when we are inside such edifices. Erell illustrates with a photo he shot in the waiting room of a doctor’s office. It shows a shut window with its shade pulled down.

When Erell asked the clerk why, she explained that she had the lights and air-conditioner turned on.

“What is the point of having a window, if you never open it or look out of it?” he pressed.

She replied, “You know what? You’re right. I really don’t need a window.”

“Given a choice, most people would say they prefer an office with a window,” he says. “In practice, however, many of those who are fortunate to have one do not take advantage of it.”

Some Israelis find their apartments are actually quite dark.

“This is usually because their windows are too small,” Erell says. “It is much cheaper to build a small window than a large one. So contractors go for the minimum legal standard. And anyway, when a window is big, sometimes there’s no place to put the closet, because the room wasn’t designed correctly. A window has the potential to be the source of light, warmth and a view, but it can also constitute a weak spot.”

According to Erell, who joined Blaustein in 1986, “The optimal situation is to have windows facing south — because they give the most light and warmth in the winter, and north, for cross-ventilation. And when windows are planned right to begin with, there is less of a problem. But there are solutions for this, too, when there is no choice.”

Erell, a 58-year-old married father of three who lives in the Neve Zin solar-powered neighborhood near the Sde Boker campus, says he is aware that any solution that is too costly will be resisted by Israeli contractors under pressure to build more affordable housing.

He explains that apartments in Israel would not be significantly more expensive as a result of better, more insulated windows. The cost of land and site development has contributed far more to the increase in the price of apartments.

“It’s true that the whole operation, from start to finish, should be done more efficiently to begin with,” he adds, pointing to what he calls “less exotic solutions” to existing obstacles to maximizing light and minimizing glare. Among these is a “light shelf” that works with windows that reach nearly to the ceiling. Like an adjustable awning, it directs the natural light in a room in accordance to both winter and summer conditions.

Some of his innovations were arrived at from personal experience, both in Israel and in Portland, Oregon, where he spent a sabbatical year.

“When you do something by the book,” he says, “you often discover that the book was not written for Israel, and you need to write a different book.”

And though Erell has co-authored a number of books, most recently Urban Microclimate: Designing the Spaces between Buildings (2010), his attempts at “changing the manual” also involve inventing new products. This is part of the work of his department at Blaustein.

One such product is the Seasons Window — designed to suit Israeli climate conditions, particularly those of the desert. Its fully rotatable frame has a clear pane that provides a weather-tight seal, and an additional tinted pane. Seasons can be rotated to allow in heat and sunlight, or keep it out, while promoting thermal and visual comfort.

So far, it has not been sold in Israel because the project fell through at the marketing stage, and builders therefore do not know of its existence. Erell says many people give lip service to the idea of “green” construction but do not follow through on this ideal.

“While there is much more awareness than there used to be, what is lacking is knowledge, expertise and a willingness to do what is required to close the gap between words and deeds.”

Energy consumption in a building, he says, is affected by three things: “One is the correct planning of its envelope. The second is selecting efficient equipment and appliances. The third is us. People. We have to be aware of how to conserve energy. This means, for example, when we leave for work in the morning during the winter, we should open the blinds. The sun will heat the house. At night, we should shut them. In the summer, we should do the opposite: close them in the morning, and open them in the evening for ventilation.”

But although a house should be planned at the outset to optimize energy efficiency, he says, “We should remember that it is a machine that has to be built for the person who lives in it. It has to be comfortable. And if we can live comfortably and also conserve energy, that’s great.”

UNCOVER ISRAEL - Get the ISRAEL21c
Weekly Edition free by email
Sign Up Now!
Bring Israel's story to life.
Millions of people around the world rely on us to gain a deeper understanding of Israel. We are the trusted source for original content you won't find anywhere else.
You can make a difference. Donate today to support journalism that brings Israel’s story alive.
SUPPORT ISRAEL21c
Read more on:   Evyatar Erell, window, inventions, Negev, People, Eco-Living, Environment, Sustainable energy, Ben Gurion University of the Negev