The long list of major-league sports commissions won by the studio of Israeli sculptor Omri Amrany – including the iconic Michael Jordan “Spirit” outside Chicago’s United Center and the statue of Chicago Cubs broadcaster Harry Caray at Wrigley Field – could lead one to assume Amrany had spent his childhood on a baseball diamond or basketball court rather than a banana plantation.

The 59-year-old artist likes to joke that he earned
a “BK” degree (Born on Kibbutz). He has little formal training aside
from a 1985 marble-carving course in Italy, where he met his future
wife, Chicagoan Julie Rotblatt. Married since 1987, the couple and their
son Itamar, 24, head a 25-person fine-arts studio, Timeless Creations, outside Chicago.

“You have to find a way to become who you are by struggling to figure out how to make
it, to be different than anybody else,” Amrany tells ISRAEL21c. He
seems to have found that magic formula. His studio is flooded with commissions,
and the Rotblatt-Amrany Fine Art School is flourishing. 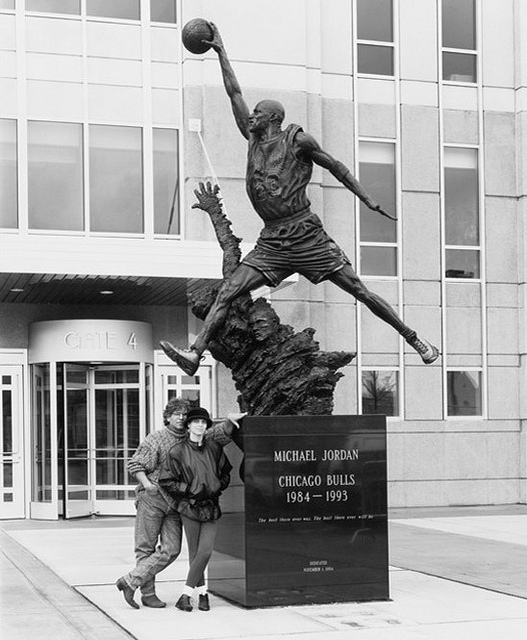 The 1994 “Spirit” statue that started the ball rolling.

The works that get the most
press are those commissioned by the Chicago Bears, Blackhawks, Bulls,
Cubs and White Sox as well as the Detroit Tigers, Green Bay Packers,
Los Angeles Lakers, Philadelphia 76ers, Seattle Mariners and Washington
Nationals.

This was presented by the Baltimore Orioles to retiring pitcher Mariano Rivera.

Building a reputation and an artists
culture

Farther from the limelight, Amrany’s reputation was built on projects in diverse genres for
clients such as Johnson Wax, Lifeway Foods, the Lincoln Library, several
municipalities and universities, and many other corporations seeking
artworks for their public spaces.

“A Tribute to Jackie Chan,’’ sculpted by Julie,
Itamar and Omri Amrany, will greet visitors at the opening of the new
Jackie Chan Museum in Shanghai. Another Timeless Creations sculpture,
an image of the boy with his tongue frozen to a pole from the movie A Christmas Story, has been commissioned
by Hammond, Indiana.

“We’re trusted by the
world of corporations because we always deliver within budget and on time, at top quality,” Amrany
says. “After the artistic decisions are made, it’s all about production.”

But his self-appointed mission
goes beyond that. ““The artists of the world are trying to see the
light at the end of the tunnel. How can they strive and make it? My
job is to nurture artists around us. We’ve developed a whole
culture of artists in the area,” he says.

Despite their packed schedule, he and his son have founded a new company – still in stealth mode – to pioneer a new direction in flexible and futuristic architectural design.

They are fixtures of the Chicago arts scene. “In the Midwest, when you shake hands it’s
a completion of a project. I liked that kibbutz mentality.”

When baby Omri was born into a family of artists at Kibbutz
Ashdot Yaacov in the Jordan Valley, laundry workers on the collective
farm bought his parents a book about Michelangelo. “We didn’t have
many books. That was my bedtime story,” he relates. 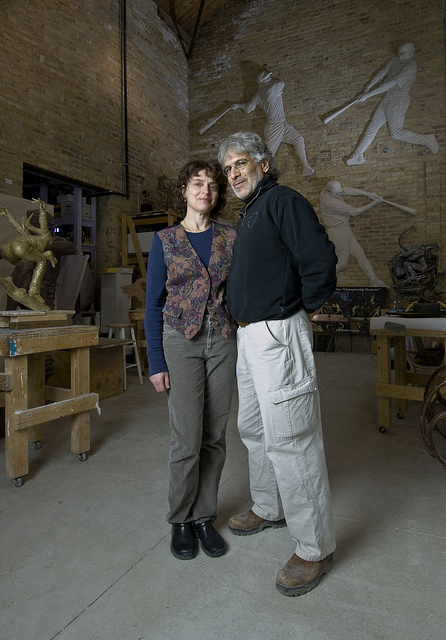 The couple in their Timeless Creations studio.

His mother designed and sewed
the clothing for the women on the rather Spartan kibbutz, and sometimes Omri helped her cut patterns.
His father, formerly a private bodyguard for David Ben-Gurion, was an
art teacher, ceramist and woodcarver.

His aunt Leah, on his father’s Yemenite side of
the family, taught him to weave classic wall tapestries on her loom.
His own tapestries were exhibited at Madison Square Garden in 1978.
Grandma trained him in traditional papyrus basket-making, and Amrany’s
painting of a Yemenite bride dressed in papyrus work hangs in the Rehovot
Municipal Art Gallery.

Besides tending bananas, dates and cotton plants in his
youth, Amrany started a music club in a kibbutz bomb shelter he painted
in psychedelic colors. As an adult, he headed education for the Haifa
region of Tzofim Israel Scouts. When he was 32, the kibbutz invested
in his artistic future by sending him to Pietrasanta, Italy, “to break
stones,” as he puts it. He and Julie returned to Israel together,
leaving for Chicago in 1989 with baby Itamar.

“I promised my father I’d be back in seven years,” he confides.
But his father died not long after those seven years were up, and Amrany
is still in Illinois. “I jumped into the water of an art career and
developed a business,” he says. “I might one day come back. I never
considered the possibility of not coming back.”

That is, unless his application
to colonize Mars is accepted.

“I registered to go to Mars in 2022 through a company
in Holland. I sent them an interview and I’m waiting enthusiastically
to hear back,” he says. “If selected, I could become the first sculptor
on Mars. I’d have lots of rocks to break — as many as I want.” 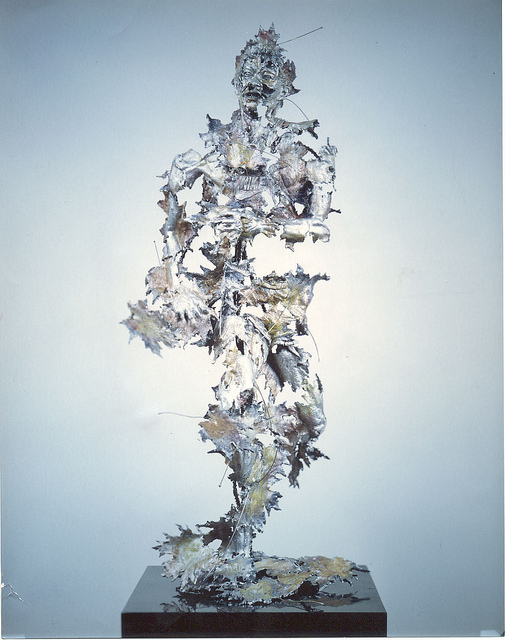 Amrany does many commissions unrelated to sports. This one is titled “Against the Wind.”

UNCOVER ISRAEL - Get the ISRAEL21c
Weekly Edition free by email
Sign Up Now!
Bring Israel's story to life.
Millions of people around the world rely on us to gain a deeper understanding of Israel. We are the trusted source for original content you won't find anywhere else.
You can make a difference. Donate today to support journalism that brings Israel’s story alive.
SUPPORT ISRAEL21c
Read more on:   Visual Arts, athletics, Culture, Art in Israel