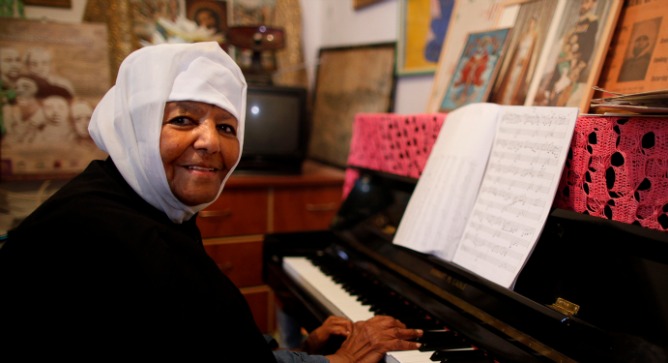 At the recent four-day Sacred Music Festival in Jerusalem, hundreds of music lovers and performers crowded the city’s holy sites to hear the world’s spiritual and religious music traditions.

With top talent from across the globe taking part, no one foresaw that the biggest attraction at the festival – part of the annual Jerusalem Season of Culture – would be a shy 90-year-old nun.

Ethiopian-born Emahoy Tsegue-Mariam Gebru, who has lived in isolation for more than three decades, had the classical world’s music experts abuzz with divine inspiration.

Critics who had come across her recordings before had dubbed her a “musical treasure.” But it wasn’t until the Israeli event that the music world would know how prolific she has been.

Gebru released her first recording in Germany in 1967 and published several other works over the years. An educational non-profit organization named for her – the Emahoy Tsege Mariam Music (ETM) Foundation — teaches classical and jazz music to children in Africa and helps American children to study music in Africa.

“The wonderful thing about this project is it happened while she was still alive. She was able to see and hear others play and sing her music,” orchestral conductor Ilan Volkov, Dunietz’s husband, tells ISRAEL21c. “She dreamed of getting recognized for what she does. These concerts showed her what could have been.”

The nun was born Yewubdar Gebru on December 12, 1923, in Addis Ababa, to an aristocratic family. At age six, she and her sister were sent to a boarding school in Switzerland. There she heard her first piano concert and decided to play and study music – first violin, and then piano. 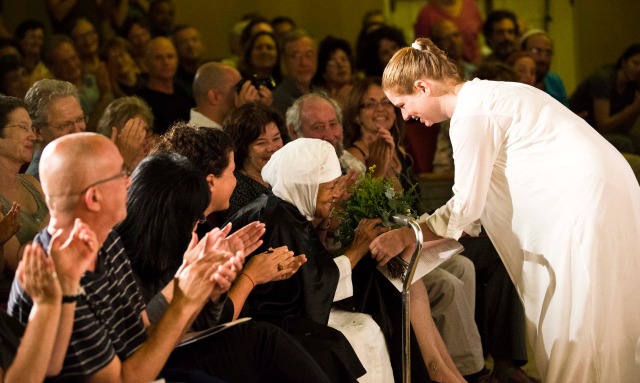 Gebru accepting flowers from Maya Dunietz after a performance of her music. Photo by Tal Shachar/Jerusalem Season of Culture

She returned to Addis Ababa in 1933, was exiled with her family from Ethiopia in 1937, and returned to her homeland years later. She was awarded a scholarship to study music in London, but Ethiopian authorities denied her permission to leave the country.

Her dream of a career in music came to a halt and instead Gebru secretly fled to the Guishen Mariam monastery, served two years there and became a nun at the age of 21. She took on the title Emahoy and her name was changed to Tsege Mariam.

Following her mother’s death in 1984, Gebru fled to the Ethiopian Monastery in Jerusalem because socialist doctrine in Ethiopia clashed with her religious beliefs.

For nearly three decades, in a small narrow room on the aptly named Ethiopia Street in Jerusalem, Gebru served the church and privately returned to her beloved music. She played up to nine hours a day and wrote countless compositions for violin, piano and organ concerto.

Her music, Volkov says, is a narrative of her life. “It’s very meditative and inward-looking. It has a melancholic air, very generous and beautiful. Some works are more outward-looking, but others are about feelings of loneliness. It’s a dialogue between a person and their God.”

Volkov had no idea that buying a CD in London eight years ago for his pianist/singer/composer/choir conductor/sound artist wife Maya Dunietz, would totally change his life, Gebru’s life and the world of classical music. He and Dunietz listened to their new disc and were in awe of the “mix of styles of traditional Ethiopian, classical and blues,” says Volkov. They read the liner notes to find out more about the musician and were flabbergasted to discover she lives in Jerusalem.

Isolation to the spotlight

Gebru, according to organizers of the Jerusalem Sacred Music Festival, is “one of the most important composers that Africa has ever produced.” 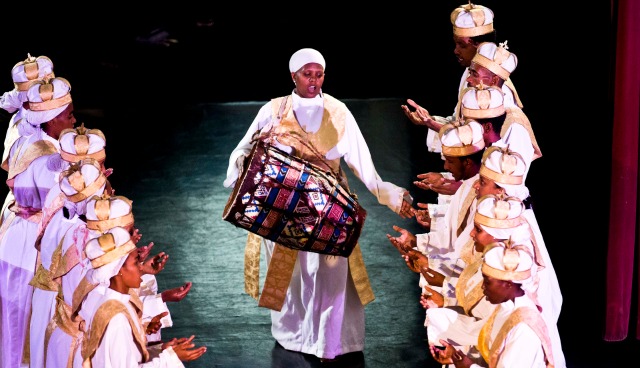 Fortunately for the world’s music lovers, Dunietz and Volkov struck up a friendship with Gebru and were entrusted to bring her music to the world.

At first, they visited Gebru in her small room at the monastery. Sometimes she would play piano for them; other times they would sit in silence. Their bond grew and Dunietz even organized a road trip to the Kinneret (Sea of Galilee), which had been a dream for Gebru.

Then two years ago, Gebru surprised Dunietz with an unexpected present.

“She handed over four plastic bags — old wrinkled Air Ethiopia bags — containing hundreds of pages, all muddled up, a big mess, written in pencil, some of them 60 or 70 years old,” Dunietz told The Guardian. “It was all the pages of her music that she had found in her room. ‘Make a book’, she said.”

Dunietz turned to Jerusalem Season of Culture organizers for help. In addition to the book, the recent concerts marked the first time Gebru heard her music performed by professional musicians.

Gebru was so overwhelmed by the attention that after a few interviews, withdrew back to her solitude.

That left Volkov, Dunietz and others to speak about her scores.

“Emahoy has created her own genre of music,” Volkov tells ISRAEL21c. He says she draws influences from European classic masters like Chopin, Beethoven and Strauss, Ethiopian church music, and Ethiopian pop stars of the 1960s.

Volkov says that Gebru “has a lot of music still to be released. She also has songs in six languages that we hope will be released.”

Dunietz hopes to join forces with other Ethiopian musicians to present Gebru’s music on stages abroad. The team behind Gebru’s first book is now in contact with a small record company and is working to release her compositions, promising at least one recording in the coming year.

UNCOVER ISRAEL - Get the ISRAEL21c
Weekly Edition free by email
Sign Up Now!
Bring Israel's story to life.
Millions of people around the world rely on us to gain a deeper understanding of Israel. We are the trusted source for original content you won't find anywhere else.
You can make a difference. Donate today to support journalism that brings Israel’s story alive.
SUPPORT ISRAEL21c
Read more on:   Emahoy Tsegue-Mariam Gebru, sacred music festival, Music, People, Entertainment, Culture, Art in Israel