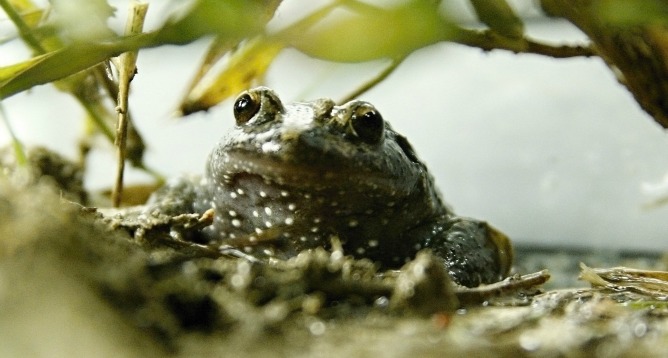 Researchers have found that a frog discovered in Israel in 2011 that was thought to be extinct is the last of an entire genetic group that died out over 10,000 years ago.

Native to Israel’s north, the Hula Painted Frog was first discovered in the Hula Valley in the 1940s, but disappeared gradually as swamplands in the region were destroyed. The last confirmed sighting of the frog was in 1955, and it was declared extinct by the International Union for Conservation of Nature in 1996.

Now scientists at Jerusalem’s Hebrew University are calling the frog a unique “living fossil,” because it has retained the same form over millions of years, and is the last, not only of its own species, but of an entire genetic group. It has no close relatives among other living frogs, according to the university.

“The Hula frog differs strongly from its other living relatives, the painted frogs from northern and western Africa. Instead, the Hula frog is related to a genus of fossil frogs, Latonia, which were found over much of Europe dating back to prehistoric periods and has been considered extinct for about a million years,” said Hebrew University.

The research, which was published recently in the scientific journal, Nature Communications, was carried out by a team of Israeli, German and French researchers, led by Hebrew University’s Rebecca Biton, Prof. Sarig Gafny of the Ruppin Academic Center and Dr. Vlad Brumfeld of the Weizmann Institute of Science.

The scientists conducted details studies of the frog’s DNA and skeletal morphology and found that the frog, which has a black belly with white dots, is the only living species of its kind.

“The results imply that the Hula painted frog is not merely another rare species of frog, but is actually the sole representative of an ancient clade of frogs (a group with a single common ancestor),” the university said.

Fossils of Latonia frogs as old as two million years, have been found in Israel in the past, but it was thought the group died out more than 10,000 years ago.

UNCOVER ISRAEL - Get the ISRAEL21c
Weekly Edition free by email
Sign Up Now!
Bring Israel's story to life.
Millions of people around the world rely on us to gain a deeper understanding of Israel. We are the trusted source for original content you won't find anywhere else.
You can make a difference. Donate today to support journalism that brings Israel’s story alive.
SUPPORT ISRAEL21c
Read more on:   News, extinction, living fossil, latonia, Hula Valley