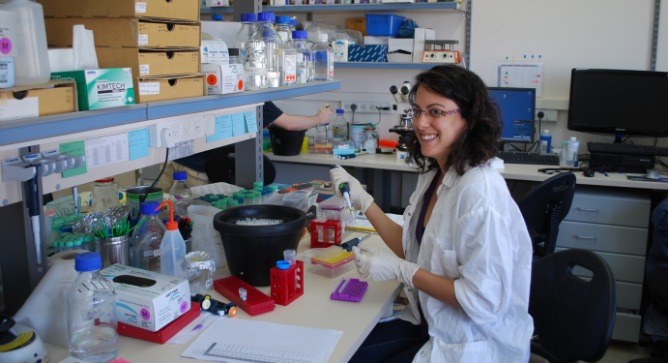 A team of Israeli researchers is making unprecedented progress in mapping the mechanism of these “good guy, bad guy” cells and understanding their role in the progression of two deadly diseases: colorectal cancer and idiopathic pulmonary fibrosis (IPF), an incurable lung condition.

“We identified a cell-surface receptor on the macrophages, paired immunoglobulin-like receptor B (PIR-B), that regulates their response to suppress their wound-healing capacity,” explains Ariel Munitz, a researcher in the Department of Clinical Microbiology and Immunology at Tel Aviv University.

PIR-B sends out a signal to stop macrophage action before it goes into “overdrive” and does harm. Therefore, this receptor could be good candidate for drugs targeting diseases linked to macrophage activity.

“Macrophages have a role in colorectal cancer, and that’s how we got interested in them,” Munitz says. Doctoral student Danielle Karo-Atar did the experiments in his lab, which focuses on how macrophages behave.

“Macrophages can clear the cancer — or let it survive by feeding it ‘goodies.’ We started working on them in an attempt to understand the mechanisms that drive these two polarized and extreme functions with a grant from the [US-based] Israel Cancer Research Fund, and the research took us to a lung disease we had never studied before.”

Clue to a fatal disease

That lung disease is idiopathic pulmonary fibrosis. “Idiopathic” means it has no apparent cause, and “fibrosis” means it is characterized by the growth of excessive scar tissue. The disease is frequently fatal; half of those diagnosed will die within three to five years. Approximately 50,000 new cases of IPF are diagnosed each year in the United States alone.

Since IPF has many parallels to cancer, including the function of macrophages in fibrosis, Munitz explains that scientists can gain insights on macrophage roles in cancer by studying how they behave in IPF.

“The IPF field is desperately seeking therapeutic candidates,” Munitz tells ISRAEL21c. “The macrophage is a resident cell in the lung, and therefore the same factors that influence the lungs – especially environmental triggers — will also act on these cells.”

So the research went in two directions: Identifying how PIR-B suppresses the activities of “tumor-associated macrophages” in colorectal cancer — the second leading cause of cancer-related deaths in the United States and the third most common cancer in men and in women — and how PIR-B can limit the devastating effects of IPF.

Preliminary findings were reported in the American Journal of Respiratory Cell and Molecular Biology, an official journal of the American Thoracic Society, and Munitz says Karo-Atar is continuing her research “with exciting new data we haven’t published yet.”

A collaboration with a research group in Munich provided confirmation that the pathways seen in the mice in Munitz’s lab are also present in human pulmonary fibrosis cells taken from biopsies. Funding for this aspect of the study came from the Fritz-Thyssen Foundation in Germany.

He explains that once a lung becomes fibrotic, the condition is irreversible and progressive. IPF is resistant to the usual steroid treatment approach. “For years, because steroids don’t work, the role of inflammatory cells in IPF was underestimated. It is now known that steroids may activate the macrophages to become more fibrotic, so they could actually worsen the disease.”

Given the strong correlation between tissue fibrosis, repair processes and cancer progression, the researchers hope that strategies to suppress macrophages in IPF would work just as well with regard to colon cancer.