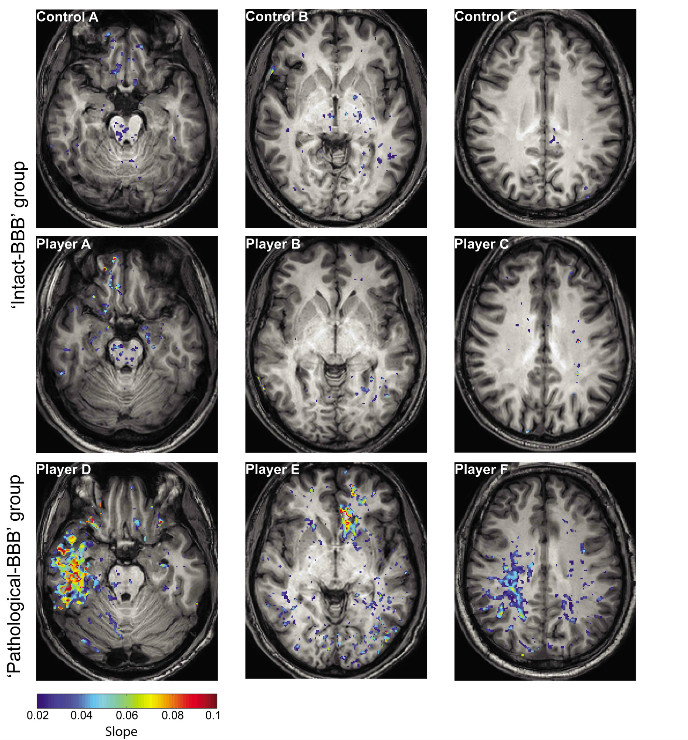 Images from the Ben-Gurion University of the Negev JAMA Neurology study.

As concern grows in the US about the danger of head injuries to American football players after a spate of recent high-school deaths, an Israeli team has developed a new magnetic resonance imaging (MRI) diagnostic approach that can more easily visualize and assess the consequences of even mild injuries to the brain.

A blow to the brain does not have to be hard to have serious consequences for any players of contact sports such as American football and hockey, but until now there wasn’t a diagnostic capability to assess these injuries immediately after the trauma.

Dr. Alon Friedman and his team at the Brain Imaging Research Center at Israel’s Ben-Gurion University of the Negev hope to change that.

Researchers at BGU and its affiliated Soroka University Medical Center in Beersheva showed, for the first time, how they were able to identify significant damage to the blood-brain barrier (BBB) of football players following “unreported” trauma or mild concussions. The method uses dynamic contrast-enhanced magnetic resonance imaging (DCE-MRI) to detect and localize vascular pathology and BBB breakdown.

The BBB is composed of proteins, membranes and other materials that protect the brain by preventing many dangerous substances from penetrating. Medical researchers, including Friedman’s group at BGU, are working to find ways to develop drugs that could repair a damaged BBB and possibly prevent Alzheimer’s disease and other neurological diseases in some patients.

Forty percent of the examined football players with unreported concussions had evidence of “leaky BBB” compared to 8.3 percent of the control athletes.

“The group of 29 volunteers was clearly differentiated into an intact-BBB group and a pathological-BBB group,” Friedman said. “This showed a clear association between football and increased risk for BBB pathology that we couldn’t see before. In addition, high-BBB permeability was found in six players and in only one athlete from the control group.”

Published in the current issue of JAMA Neurology, this study could help physicians in the decision-making process regarding treatment and when an athlete may return to the playing field.

“Generally, players return to the game long before the brain’s physical healing is complete, which could exacerbate the possibility of brain damage later in life,” said Friedman, who has long researched the way in which a damaged BBB plays a key role in brain dysfunction and degeneration, and may be an underlying cause of neurodegenerative complications following brain injuries.

The publication of this study follows closely on the heels of Tel Aviv University study showing that an enhanced environment could speed the healing of traumatic brain injuries.