Meet Rosa. She’s a much-loved St. Bernard dog who was hit by a car and suffered severely broken bones. She may not have survived the trauma had she not gotten a new bone-growing treatment from Israel.

Rosa is one of the 200 pets in the United States, Canada, Australia, Israel, Germany and the UK that have been treated with BoneCure, developed by the Israeli company RegeneCure.

BoneCure is a unique artificial membrane rolled into a sleeve by veterinary surgeons, encasing the space where lost bone should grow. It is the only solution of its kind on the market, the company says.

Anchored with bolts or sutures, BoneCure’s thin membrane is made from the same artificial materials used to coat slow-release aspirin. Designed to disintegrate over time, and loaded with a positive charge, BoneCure encourages new bone cells to “sit” on its surface, business development VP Harry Langbeheim tells ISRAEL21c. 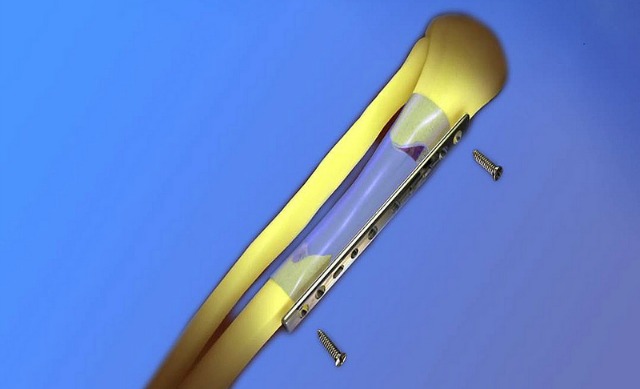 Small perforations in the material allow growth factors to pass in and out of the area where the bone should grow, preventing unwanted tissue from entering the future bone zone.

Complete instructions on how to set it in place are available on the company website, meaning that no complicated tutorials or training sessions are needed, says Langbeheim, who earned a PhD in immunology from Israel’s Weizmann Institute of Science.

Dr. Itamar Tsur, an Israeli veterinarian, was hired to manage about 35 clinical cases using BoneCure. So far he has used the technology in five dogs and a few cats. The product, he tells ISRAEL21c, “seems to do the job without a second operation.”

This is in contrast to the standard procedure of taking a bone graft from the pet’s buttocks area, which means another operation, more pain and more cost.

Tsur also says the regenerating membrane product could aid in cases where broken bones are not knitting as they should. “This membrane draws in the stem cells with its positive charge on the membrane of this medical device, and reboots this process,” Tsur says.

Here is how BoneCure works.

Overall, the BoneCure sleeve helps speed up healing time and reduces the chances of severe infection. That is welcome news, considering that about five to 10 percent of all severe bone fractures end in infection and more time under the knife, says Langbeheim.

His company’s solution can create accelerated bone growth 43 percent faster than without it, meaning eight weeks rather than five months of healing time until dogs like Rosa can hit the backyard running.

The company is also working on a yet-to-be-named product to help accelerate bone re-growth in humans.

The cost for the human market will range from $200 to $500 per sheet of material, much less than an allograph (bone transplant from another region of the body or from a cadaver or animal).

RegeneCure is targeting the dental implant and orthopedics markets with results of clinical trials in growing jawbone for dental implants due out this fall.

“We hope that in this trial of 40 randomized patients, 20 with and 20 without our technology, that we can prove the acceleration of bone augmentation,” says Langbeheim, “and reach that 43 percent improvement endpoint that we claim.”

About 500 existing companies in the dental market, says Langbeheim, rely on collagen –– a protein-based scaffold that comes from cows or pigs and is not compatible in all people. RegeneCure still needs to prove that its unique technology, classified as a medical device, will help bone re-grow faster.

The safety of the material has been proven scientifically and has been used for the past 35 years for other medical purposes.

RegeneCure built its technology based on pending patents licensed from Yissum, the tech transfer company of the Hebrew University in Jerusalem, and from Hadasit of Hadassah Medical Center, also in Jerusalem. The company of eight, founded in 2010, is based in Jerusalem and has gotten about $3.5 million in funding. An additional investment round of up to $8 million is now sought.

Meanwhile, RegeneCure is starting clinical trials in orthopedics at Hadassah and at Leeds General Infirmary Hospital in England, a clinic that specializes in guided bone regeneration.

The American army has expressed interest in using BoneCure for treating gunshot wounds sustained by soldiers serving in Iraq, pending the results of clinical trials.

“We can do the same thing as the state-of-the-art technologies – but faster,” says Langbeheim.